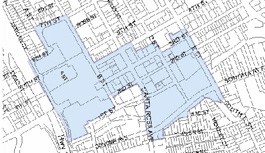 Is local government poised for a land grab?

Big blue: That largeish swathe of color above could represent a massive enactment of eminent domain. A curse or a blessing?

Santa Rosa is about to be redeveloped, and the changes could be huge. The proposed Gateways Redevelopment Project spans 1,102 acres and includes the Coddingtown Mall, much of downtown Santa Rosa, Railroad Square and most of Santa Rosa Avenue. On June 30, the Santa Rosa City Council unanimously voted to adopt the project. It will go into effect July 21.

But a group of business owners calling themselves the Santa Rosa Avenue Area Business Association (SRAABA) is circulating a petition to put the redevelopment project on the ballot. They want to get 9,000 signatures in by July 20 to force the city to let people vote on the issue.

The group’s main concern is that the project gives the city too much power over private business. Among other things, it includes eminent domain, which is when a government can expropriate private property without the owner’s consent.

“With this project, the city could be able to take private property,” explains Rosa Koire, vice president of SRAABA. “For example, if a developer liked a piece of land but couldn’t buy it, the city could say it was blighted and take it from the property owner and give the land to the developer.”

Redevelopment in concordance with eminent domain usually occurs when an area is deemed to be blighted, as when physical and economic conditions are hugely compromised. Originally, such redevelopment was meant for areas like inner Detroit, where no developer wanted to invest. In that situation, the government can revitalize the area by creating economic incentives with special funding and programs.

Frank Kasimov, a redevelopment program specialist with the city, admits that not all of Santa Rosa’s proposed redevelopment area is actually blighted.

“The area as a whole exhibits characteristics of economic and physical decline,” he says. “But that doesn’t mean every parcel is blighted. It means the area compared to the rest of the city has more crime, less rents and home lease rates per square foot, less tax revenue–things like that.”

The project would be funded with property taxes. Every year for the next 45 years, a certain percentage of property taxes would be allocated to redevelopment. Of that amount, 20 percent would go to affordable housing. In return, it is expected to generate $427 million in tax revenue.

The money would be used to create a mix of public and private developments. On the public side, that could mean parks, libraries and better streets. On the private side, business owners and developers could get funding for improvements they would otherwise have to pay for themselves.

“A private person might want to do some rehabilitation to a commercial structure, and we could offer them a low-interest loan,” says Kasimov. “Somebody else might say, ‘I’ve got a building on a property that I want some financial assistance to make into a mixed-use site.'”

However, SRAABA believes that the redevelopment project would allow developers to use tax money for their own private benefit, such as creating large housing or mixed-use projects. This, combined with eminent domain, is enough to make some business owners nervous that their property could be taken away from them in favor of more economically lucrative developments.

The city says this would not be the case.

“There is some fear that the city will come and buy up a lot of properties,” says Kasimov. “We have no plans at all to do that. In the past, we have only used eminent domain as a last resort. And it can be a very useful tool and beneficial to property owners.”

After the 1969 earthquake wrecked havoc on downtown Santa Rosa, the city bought up all damaged property, including many residential homes. They paid fair market value for the homes and also paid for the relocation of many homeowners. These buildings, many of them historic, were then torn down and replaced with most of the buildings that now make up downtown.

But sometimes eminent domain is used in other ways. In San Ramon, which is undergoing a similar redevelopment plan, the city is forcing out 20 light industrial and automotive businesses on the north end of town, according to the Contra Costa Times. In their place, it wants to create a 128-acre mixed-use project with 735 homes.

With such serious implications, SRAABA thinks citizens should have a say on whether they want redevelopment or not. Early signs suggest that the group members have support. They’ve already had the areas around Juilliard and Olive parks removed from the redevelopment map and are well on their way to collecting enough signatures for the referendum.

For auto dealers like Jim Bennet, who owns Good Stuff Auto on Santa Rosa Avenue, redevelopment threatens his property investment. If his area is rezoned from light automotive to multiuse residential, his property value could drop.

“The way they went about creating this project is pretty sneaky,” he says. “Something this big should have been in front of our noses ages ago. We should be sick of hearing about it. I shouldn’t have to use my day off to stand in a parking lot collecting signatures just to get something on the ballot that should have been in front of the people of Santa Rosa in the first place.”

And with cities all over California from San Diego to Emeryville adopting redevelopment plans, some worry redevelopment is less a way for a city to improve itself and more of a money grab for local government.

“This subject is much larger than just Santa Rosa,” says Bennet. “It’s Big Brother on the largest scale. I mean, taking our property? That’s really scary.”