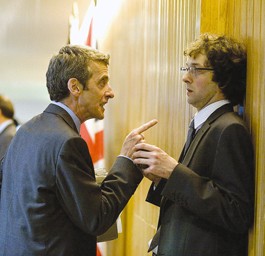 You can’t make this stuff up, and writer-director Armando Iannucci didn’t have to. In the Loop has Iannucci, a well-known figure in British television comedy, doing a scathing sort-of version of the dawn of the Iraq War. Its subject is the forecasting of a war of choice in an unnamed country, based on info from a single dubious informant.

A high-ranking member of the U.S. presidential staff rushes to war and is opposed behind the scenes by a celebrated army officer. James Gandolfini’s Lt. Gen. George Miller is a slobbier, more wrathful version of Colin Powell, profane but nobody’s fool. Mimi Kennedy plays Miller’s best ally, Karen Clarke, a career State Department diplomat with dandruffy hair and teeth that seem to be disintegrating during the middle of a crisis.

Gandolfini and Clarke are In the Loop‘s moral center, the only two people who operate with good will. We want to follow them through this sonata of collapsing spines and raving, swearing political careerists, but Iannucci often just won’t let us.

Chief among the abusers is the White House warmonger, the Rumsfeldian Linton Barwick (David Rasche), a pious creep who keeps a live hand grenade on his desk. Clarke and the state department try to find out his hidden scheme. Meanwhile, across the Atlantic, the British PM’s press secretary Malcolm Tucker (Peter Capaldi) keeps up both fact-finding and fulmination. Tucker is a Scots telephone screamer whose favorite task is calling in underlings to his office for “a bollocking” (a disciplinary session).

Tucker’s two favorite bollockees: Simon Foster (Tom Hollander), a minor MP from an inglorious district, and Foster’s tousled, Ron Weasley&–like aide Toby Wright (Chris Addison). Foster is meant to be a chair-warmer at the U.S./U.K. diplomatic meetings. Unfortunately, the MP grabs unwarranted attention by blurting something out to the press. His words either state or do not state the Britain’s plan to partner with America in its upcoming war.

Foster’s later attempt to restate his misstatement is a fine macramé of words, far too tangled to reknit here. The lines have something to do with the “mountain of conflict” that cannot be anticipated by the speeding aircraft of destiny, a mountain that cannot be predicted, only climbed. Certainly, this diplomatic obfuscation is inspired by Rumsfeld’s “known unknowns” speech, but it is even more slippery.

Thus, these hangdog wooly Brits brave D.C., a den of arrogance and suckling policy wonks: “You should still be at school, having your head shoved down a toilet,” Tucker snarls at one kid.

In the Loop is a relentless festival of wit. When Foster has to go back to the boondocks to meet with his constituents—”from the White House to the shite house”—he’s plagued by a stubborn yokel (Steve Coogan, Iannucci’s partner from his days with the Alan Partridge show). An instructive lesson in the difference between the parliamentary system and whatever it is exactly that we’ve got here in the way of government, this film assures us that international affairs can be hijacked by a man obsessed with the broken retaining wall of his council estate.

Coogan, wearing a wool hat and an air of blocked grievance, is a delight. So is Gandolfini, with his croaking, supersized wrath. His ogreish grimace, as he watches the vile Tucker try to out-macho him, is a serious threat in a film full of empty ones.

At first it seems that Gandolfini has never been so good in a movie, and then it becomes clear that it’s because In the Loop is so very much like TV. It all must have looked great on paper. The scathing verbiage is a gusher. It’s not that the talk is too fast to comprehend (though some will find it so), it’s that it might have been better focused through the smaller screen. A movie needs so much more than cold wit. In the Loop is a case of smartness outsmarting itself. It’s duration keeps you helplessly laughing, but it sends you home with a cold, dismal feeling.