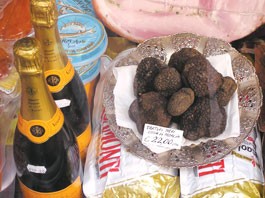 While French truffles decline, new producers, including those in Northern California, ascend

The Périgord black truffle may owe its name and stardom to the marketing and culinary genius of the French culture, but in the nation of its birth, this famed underground mushroom faces an uncertain future. A century ago, the forests of France produced an estimated 1,200 tons of semi-wild black truffles every winter, but the annual harvest has seen a long and steady decline, and last winter amounted to just 20 tons. The crash has scientists scrambling to explain it, and those with truffle-bearing properties are scared stiff. But for entrepreneurs in the rising truffle-tree cultivation industry, the French decline of the fragrant fungus smells pungently of opportunity.

In Australia, New Zealand, South Africa and Chile, oak and hazelnut orchards, seeded at their roots with the spores of Tuber melanosporum, the Latin name of the species, have grown into maturity in the last decade. Locally, too, Black Diamonds of Mendocino had been growing black Périgords in a secretive operation somewhere near Ukiah. Another farm near Santa Rosa is awaiting its first truffles, as are two in the Sierra foothills, each poised to surge into production any winter now.

While most local groves are still awaiting their inaugural truffle harvests, the farms of Australia and New Zealand are swelling into viable industries. Buyers down under receive most of these truffles, which appear in late May and remain available through August, but in the last two years they have found their way into local restaurant kitchens, and some North Bay chefs have discovered something that the world until now may never have known before: black truffles go wonderfully with summer squash.

While in the past, black truffles may have crossed oceans, they rarely, if ever, crossed the equator from winter into summer. Now they do. For Jesse Mallgren, the executive chef of Madrona Manor in Healdsburg, the possibilities of summertime black truffles invite California-style experimentation. In the past, Mallgren has featured wintertime truffle menus heavy on the meat plates, but last summer he cooked truffles into July peach recipes. The experiment wasn’t quite a winner, he says, but he will be experimenting again this summer as freshly unearthed Southern Hemisphere truffles begin appearing in the wholesale sacks of local vendors.

Meanwhile in France, nurseries that specialize in manually seeding oak and hazelnut seedlings with Tuber melanosporum spores have become commonplace and could help to offset the decline of the most cherished gastronomic treasure in the land. Dr. Pierre Sourzat, truffle-cultivation expert and manager of a truffle center in Le Montat near Cahors, has helped streamline and develop the science behind this growing trade, and he believes that were it not for France’s truffle-tree nurseries, which seed and sell approximately 300,000 trees per year, the Périgord could become commercially extinct in France within 30 years.

While some traditionalists decry the plunge of France’s truffle production as a disaster, others believe that the rising volume of cultivated production in new nations can and will compensate for any shortage in France.

“The Australians are getting ready to supply the world, and the French are trying to create this hype that there is a shortage that can’t be replaced, but that’s just to keep the price up,” says Todd Spanier, a Bay Area mushroom vendor who works under the name the King of Mushrooms. With his cousin, Spanier co-owns one of the young Sierra foothill truffle farms. “The truffles they’re growing on farms are genetically the same truffle, and they are aromatically the same truffle.”

Mallgren has been a fan of French black truffles for years, but he sees Australia’s truffles as perfect stand-ins. “The Australian truffles I had last year were as nice or nicer than the French ones,” Mallgren says. He believes truffles from Australia may arrive in California fresher than those from France, which often pass through more middlemen as they travel from there to here. This summer, Mallgren expects to have access to some of the first New Zealand truffles ever available commercially in the United States.

At Cyrus Restaurant in Healdsburg, chef-owner Douglas Keane has bought French black truffles for more than 15 years. When he began using Australian truffles two years ago as highlights on his summer menu specials, he was not disappointed.

“I’d say these truffles are easily as good if not better than the wild ones from France,” he says. Keane adds that he is eager to try those grown in California. “But I’ve only heard chitter-chatter about people growing them here and there. I haven’t seen any yet.”

Just why France’s oak and hazelnut forests have lost their truffle-bearing fertility is uncertain. Explanations include damage from deforestation, poor woodland management, excessive use of pesticides and air pollution. Sourzat says that the endemic disappearance of grazing sheep has likely played a role. Others believe the crash, which began in earnest in the years between the two World Wars, may have begun as peasants ceased to collect firewood from local forests, a cultural shift in woodland use that led to overgrowth of scrub in once productive truffle groves.

One thing that’s known is that trees older than 30 or 40 produce fewer truffles than younger ones, and this fact puts newer farms on the crest of a young and rising wave—if all works well, that is, because it doesn’t always. Though Black Diamonds of Mendocino has produced truffles for 19 years, its owner, Bill Griner, died suddenly in 2008, and the farm operation came abruptly to a halt. The truffles themselves probably still grow, though Griner’s sister, Peggy Griner-Siniavsky, who inherited the farm, said that last winter no one was onsite to harvest the fungus, leaving an entire crop to ripen and rot below ground.

Prices for black truffles have skyrocketed almost out of control with the increase in demand and the subsequent loss of supply. In the 1950s, Tuber melanosporum sold for the equivalent of 10 euros per kilo, or about $7 per pound. Today, it runs more than $300 per pound straight off the farm before retailers mark the price up as high as $1,500. Turbulence is likely to rock the market in the years to come, but such prices and profits virtually guarantee that truffles will never go away.

In parts of France, though, lovers of the black Périgord may want to smell them while they can.