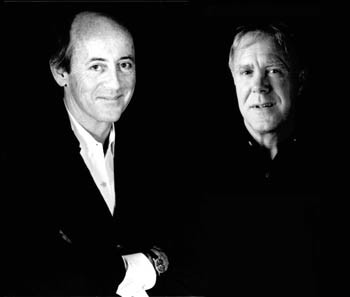 Way With Words: Billy Collins (left) and Robert Hass are tireless supporters of the public’s right to read (and write) lines of verse.

It’s even harder to gain national stardom as a poet than it is as a novelist, and that’s saying something. Consider for a moment how many poets there are in the North Bay. Now consider how many of them will ever perform to sold-out crowds at $15 a ticket or more. That’s the reality of modern poetry.

Still, some time in the past few years, Americans began to embrace poetry with a newfound enthusiasm, eagerness, and even need. There’s no one reason. You could chalk it up to soul-searching spurred by 9-11 (though the interest in poetry started before the tragedy); a proliferation of increasingly accessible poets; or the cresting of some kind of populist-poetry culture cycle.

Two of the many reasons, however, are easy to pinpoint: Billy Collins and Robert Hass, current Poet Laureate of the United States and former Poet Laureate of the United States respectively. Both appear at the Luther Burbank Center on Nov. 1, as part of the Copperfield’s Books Reader’s Series. The poets will also be announcing the winning poet from the submissions to Copperfield’s literary magazine, The Dickens.

Their appearance in Santa Rosa is being touted as the first time two Poets Laureate have appeared on one stage together–which, it turns out, is not entirely accurate, as Collins, Hass, and fellow former laureates Robert Pinsky and Rita Dove were all together recently at the Dodge Poetry Festival in New Jersey.

In any case, Collins and Hass sharing the same stage is a momentous thing, akin to seeing U2 and R.E.M. on the same bill. Hass served as Poet Laureate from 1995-1997, and during his tenure he reconceived the potential and meaning of the position, advocating literacy programs and promoting environmental awareness.

And the demand for Collins–whose 2001 collection of poems, Sailing Alone around the Room, has already gone through five printings, and whose recent collection, Nine Horses, is receiving good reviews–is nothing short of a phenomenon. His oftentimes unexpectedly humorous yet deceptively serious poems have won over many a once casual reader afflicted with the dreaded fear of poetry.

Since when did poets start making appearances to standing-room-only crowds and getting write-ups in such media outlets as USA Today? “It sure feels like poetry has a larger place in public consciousness than it did a decade ago,” Hass conjectures. “I think if it’s not one of the causes, it’s one of the symptoms–I’m not sure which.”

“I had expectations, I guess–they were not very grand expectations,” says Hass. “When I was rather a young poet, I had been invited to read [at the Library of Congress]. And the building is beautiful, but the audience for poetry at Capitol Hill was not enormous. When I thought about the job, the image was of a reception given by a not-very-rich governmental institution–that is to say cubes of cheddar cheese on toothpicks.

“Suddenly I was the spokesperson for American letters, and you have to figure out what that means and what you should do about it. There’s something about the title that connects it to the old English idea of a Poet Laureate that seems . . . grand, official, I guess, because it feels like there’s a person somehow appointed to speak for the country.”

Technically, all a Poet Laureate has to do is give one poetry reading and introduce a literary series at the Library of Congress. “It’s not a lot, and it doesn’t pay very much [$35,000 a year], so you don’t quit your day job for it.” Hass, a professor of English at UC Berkeley, commuted weekly to Washington when he was laureate.

Likewise, Collins still teaches English at Lehman College of the City University of New York. Since his appointment as Poet Laureate in 2001, Collins has compiled “Poetry 180,” a “poetry jukebox” for high schools that features one poem for every day of the school year, available on the Library of Congress’ website. It’s been getting about a million hits a week–no small feat, considering most high school English students’ attitude toward studying poetry.

To add to the general commotion of being Poet Laureate, Collins came out with Nine Horses last month. When we talked, he’d just gotten off the phone with U.S. News & World Report and was gearing up for a lecture at the Metropolitan Museum of Art in New York.

“It’s pretty nonstop,” he says, and it does have some creative repercussions, as far as time for writing is concerned. “It’s all gone. I miss it tremendously. I don’t have a life anymore; I’m on this merry-go-round.”

Even given his current popularity, Collins feels his life resembles a rock star’s “only in the sense of the desperate loneliness of the hotel room at the end of the day. When you go touring, you’re in this tunnel, and the tunnel is composed of a series of airport waiting rooms and tubular airplanes, and then you’re shuttled off to an auditorium, and then you’re put into a dinner with people you’ll never see again, and then you’re off to the next hotel and airplane. I travel all over the country, but I don’t get to see much.

Ah, the duality of success. “I think other Poets Laureate will tell you, it’s kind of like Miss America, because you never really get rid of the tag,” Collins says of his plans for the postlaureate future. “You become former Poet Laureate–it doesn’t just stop. There’s a lot of afterglow attached to it. I don’t see my schedule tapering off too much, unless I stop accepting invitations. I’ve got a new book out now, and I’d be promoting that even if I didn’t have the Poet Laureate position.”

Does Collins’ frantic schedule concern him that he might not ever be able to return to writing poetry the way he used to? “Um, not really,” he assures. “I just wrote a poem. Having finished a poem yesterday, I feel great. If I don’t write for a couple weeks, I start feeling that this job was in fact taking the poet out of Poet Laureate, and just leaving . . . laureate.”

Both Hass and Collins have agreed to choose the winning poet for Copperfield’s sixth edition The Dickens. Submissions are being vetted by eminent local poets, and Hass and Collins will choose one from the top 10. The winner will be announced at the Nov. 1 reading, with the magazine–featuring the top honoree as well as others–being published in December.

It’s a very generous gesture, given the poets’ hectic schedules, though neither seems to look at it that way. “Well, they just asked me if I would,” Hass says matter-of-factly.

“I find judging contests fairly easy,” says Collins. “It’s not to say I don’t take them seriously; I find that the good poems just leap out at you. I’m pretty speedy about it because I just think that a poem that I like is going to talk to me right away.”

The Nov. 1 reading may have a few surprises in store, even for Hass and Collins, though that’s probably the way they want it. The two colleagues, both experienced and ultraengaging readers, have not yet plotted an approach to the evening.

“I’ll talk to Billy and see,” Hass says. “The idea of appearing with him is fun to me, but I feel like around here, I’m around so much, everybody’s heard me. We’ll probably get on the phone and figure out a structure in which people get a sense of him, as well as his poems, and we’ll play off each other–a little bit of reading, a little bit of talk, some kind of ping-pong, maybe.”