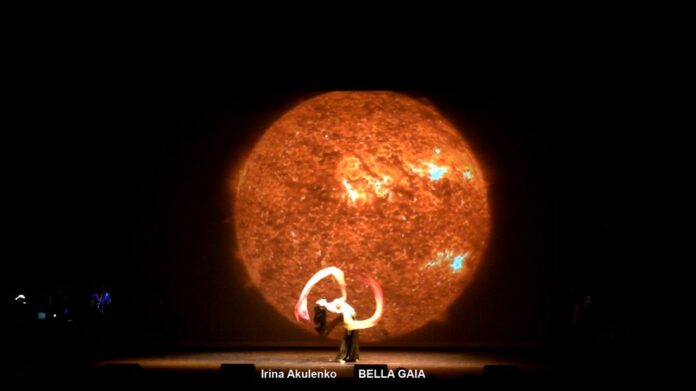 Bella Gaia seeks to deepen our appreciation for our planet

This Saturday, Oct. 11, the immersive multimedia performance known as Bella Gaia will be exhibiting a special display of their world music and dance performers accompanied by breathtaking scenes of cosmic imagery. The multi-sensory experience combines images of Earth and nature courtesy of NASA satellite photographs paired with live performances of music and dance from around the world. It is coming to the Marin Veteran’s Memorial Auditorium for a very rare performance, and for one night only.

The ensemble’s purpose is to deepen appreciation for our planet and the environmental challenges it faces. And it seems to be working; data from a NASA-led survey shows that “90 percent of the audience reported a transformed perspective of the Earth, and a doubling of respondents say that the Earth plays a more important role in their personal lives and their family” after attending Bella-Gaia.

“At the time, I had no idea what to do, how I would do it, or what it would look like,” says creator Kenji Williams. “But chance meetings, introductions, and a stubborn persistence led me to win several grants to start production, and develop the project. It really grew organically, through synchronous meetings, and collaborations. Bella Gaia chose me, not the other way around!”

It began with a collaboration between Williams and NASA astronaut Mike Fincke, who had lived on the International Space Station for over a year. Williams recalls: “I asked him ‘what changed when you went into space?’ and he told me that before he went to space, his favorite planets were Mars, Jupiter and Saturn, but once he went into space and looked out the window of the space station, he completely fell in love with planet Earth, and Earth became his favorite planet. I just got really inspired by this story, and got me thinking ‘How could I bring this transformative effect that Mike Fincke had, to those of us who cannot yet go to space?’ This was the primary motivation that led me to create Bella Gaia.”

“The long term goal is to create our own stand-alone custom theater,” says Williams. “Bella Gaia currently exists on multiple platforms using HD and traditional theaters, full-dome planetarium, and more. But I would like to design a theater screen and stage that combines the best of all these different types of experiences, into one ultimate experience.”

His vision is to scale up the technology and audience relationship to the performance in a new theater entirely different from anything in existence, one that caters to the many aspects of the experience of Bella Gaia and reaches more people.

At their upcoming show Bella Gaia wishes to build support for their latest single, “Biosphere Pulse”, and their forthcoming album Bella Gaia—Beautiful Earth which has a release date of Nov. 11, as well as to share this audio-visual extravaganza with the North Bay.