Scheduled for completion next year, Napa's 9-11 memorial is already causing a countywide buzz 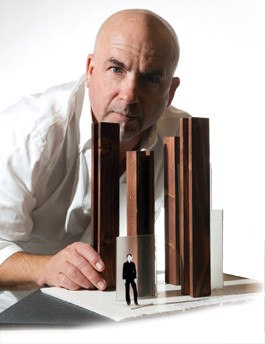 The star-spangled group gathers, somewhat out of place given that it’s a week before Memorial Day. Some push ahead with restless anticipation to get a closer look, others hang back. The uniformed stand at attention, and even the mayor is here, decked out in stars and stripes. Someone shouts, “Can I touch it?”

On a flatbed truck, giant steel beams are packed tight, each revealing a clear notation, scrawled in chalk: “Napa.” If it weren’t for the charred, gnarly pieces that protrude at whim, one wouldn’t think to look twice at them.

But these are no ordinary beams. They’re steel beams from the World Trade Center. Artist Gordon Huether walks through the crowd, and all eyes follow as he steps up to the truck. “It’s been quite a ride,” he says.

Indeed it has. Nearly two years, 30 tons and 3,000 miles in the making, the steel will be put to use for a 9-11 memorial sculpture in downtown Napa, located just off Main Street near Napa Creek. A site dedication ceremony is scheduled for Sept. 11, 2011, with an estimated completion of the memorial set for spring of 2012. While some chide the effort and others champion it, the Napa 9-11 Memorial Garden sculpture stands to be one of the largest of its kind, stretching over 23 feet high and weighing over 60,000 pounds.

The project originated in October 2009, when Darren Drake, fire marshal and division chief of the Napa Fire Department, received a communication from the September 11th Families’ Association, in concert with the New York and New Jersey Port Authority. The teaming offered local communities around the globe an opportunity to create regional 9-11 memorials utilizing actual steel from the World Trade Center. Drake responded with a formal application, a community coalition formed, and a year later, the group requested the six steel beams that will serve as the nucleus of the Napa 9-11 Memorial Garden. Local trucking company Biagi Brothers donated transport of the steel, which arrived in Napa from New York with a welcoming ceremony on May 21.

Huether and landscape architect Gretchen Stranzl McCann each came into the project during its infancy and solidified their commitment by donating time and services pro bono. Huether went in person to New York Kennedy Airport’s 80,000-square-foot Hanger 17, where the steel was housed and archived as crime scene evidence.

Given his expertise with large-scale, site-specific installations, Huether is a natural choice for the sculpture. His hope for the project is as simple as it is grand. “I want to reach the heart and minds of the people that experience it,” he says. “Everyone will take away something different, but what I hope for is an honoring of those victims. And not forgetting. A lot of people have given their lives to have the benefit of living in the way that we do.”

But while the project has support well beyond the coalition and its many volunteers, there are those who aren’t as convinced of its merits.

The Napa Valley Register has been particularly critical of the project, disputing its relevance in a March 6 editorial: “A memorial in Napa for events in which no Napans lost their lives,” it read, “seems out of place in a city with no remembrance for its World War II dead or for those who fought and lost their lives in countless other foreign conflicts.” The newspaper’s editorial board went on to address the private sector, directly suggesting that donations be sent not to construct a 9-11 memorial—estimated to cost approximately $250,000—but to the “more worthy aim” of establishing a veterans memorial building or a VFW hall.

Beyond financial concerns, local resident Marielle Coeytaux Britton isn’t certain the memorial is appropriate in the first place. “9-11 was extremely destructive,” she says. “We’re going to have to heal from this, but putting it out there in a physical form seems somehow contradictory to that healing. When a wound heals, it closes. A memorial reminding us of the scar tissue may not be the best way of healing.”

Amy Handler-Caldarola, a New York native who now resides in St. Helena, shares a different view. “The fact that this is being generated from artifacts from New York makes it more national,” she says. “While the center of this happened in New York, it affected the whole country. It happened on American soil. It’s meaningful that these [memorials] can be located in other places. As long as it’s done tastefully and integrated into the community, I’m not opposed to it.”

From Fire Marshall Drake’s perspective, it’s for all these reactions that the memorial is important. “We [firefighters] have always had a legacy to remember those that came before us,” he says. “We are who we are because we remember our past.”

As for Heuther’s view on the controversy? “That started with the Napa Valley Register doing an editorial without taking the time to gather their facts and information,” he says. “They were suggesting, for example, that the American Legion hall needed a paint job and a kitchen. And my response was, ‘Why don’t you put a committee together and make it happen?’ We’re not using city money or taxpayer money. It’s being raised from the private sector. An opportunity presented itself. I didn’t go out and the firefighters didn’t go out and say, you know, what we need is a 9-11 memorial. Sometimes things happen and you respond to them. We could have not raised our hand, I suppose, but good for Napa that we did.”

Napa mayor Jill Techel speaks to the grassroots evolution of the effort. “This wasn’t a project that was on a list when you do long-range planning,” she admits. “But I think a community has to stay open for those organic projects that come forward that gather your citizens’ interest. And this one really did it, from the local trucking group that said, ‘If you do this, we’ll send the truck out and pick up the steel for you.’ And it has just had that sort of reaction, people volunteering to be a part of it. I think that at that point, government is wise if they help people find a way to make it happen.”

City councilmember Peter Mott views the venture as a “win” for the city. “We’re very enthusiastic about the memorial being here,” he says. “It’s a chance for us on the West Coast to reflect on what happened. It’s also one more piece of the puzzle that makes the city of Napa an interesting and desirable place to visit. Our city is experiencing a renaissance, and the 9-11 memorial only adds to that.”

Together with the city council, the community coalition considered many options around how best to inhabit the memorial space. On May 17, the council approved a site on Main Street at Napa Creek, not far from the originally proposed location near Clinton and Brown streets. The new site better lent itself to the gardenlike setting and vertical sculpture the design team envisioned for the park. “A lot of the memorials you see are a piece that is simply placed in a public space and the scale is very grand,” says landscape architect McCann, “but what sets ours apart is that we are trying to create a garden that has this great human feel to it, with connectivity to some of the natural surroundings within this urban setting.”

For Huether, the sculpture is a vehicle for explaining the events: “This project is not about me. I’m using artifacts from the World Trade Center to tell the story of 9-11.” He describes the beams as material with elements of both “beauty and ugly.” Given the glass and steel construction of the Twin Towers, Huether has decided to incorporate four panes of glass into the installation—one with the victims’ names etched, another with the history of 9-11 and a third describing how the memorial came to be in Napa. “The fourth is the Windows on the World, and also a reflection of opportunity,” he says.

Coalition co-chairman Jim Asbury came on board in December of 2010, donating his expertise from over 50 years’ experience as a contractor. Asbury sees the city’s geographic proximity to the attacks irrelevant, and the importance of the mission universal: “Remember, reflect and react,” he says. Project coordinator Micah Hinkle is equally enthused by the synergistic relationship between the city and the coalition. “The project is really exciting because it’s a public and private partnership,” Hinkle notes. “There was a community desire and an opportunity for the city to step in and help it along. It’s one of the first collaborations for a full-blown park.”

The city has earmarked approximately $6,000 to cover staff time and augment shipping costs, while the estimated $250,000 necessary to complete the memorial is being raised from the private sector. In the upcoming months, volunteers will canvass community gatherings and hold fundraising events, all aimed at heightening awareness and raising the necessary funds to finish the memorial. (A comprehensive site for the project’s progress is at www.napa911memorial.org.)

With supporters at the ready, more volunteers than the organization can manage and the sheer magnitude of the 30-ton-and-still-growing sculpture, the Napa 9-11 Memorial Garden is buoyed by a mission that’s equally grand. Huether raises his proverbial American flag one last time.

“This is a way to reflect on who we are, why we do the things we do and how we respond to things that happen in our world,” he says. “It’s about coming up from the ashes and standing up with dignity. We are alive. I see [the memorial] as one part somber and reflective and one part hope for the future.”

Christina Julian lived and worked in New York City at the time of the Sept. 11 attacks. She now resides in Calistoga, working as a wine and food writer. Find her at www.wackywinesense.blogspot.com.

Next ArticleAcross the Bridge: July 6-13