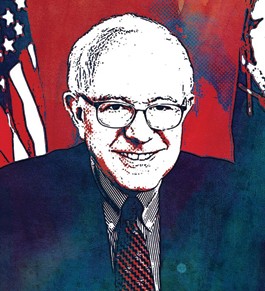 I admire Congressman Bernie Sanders, who argues for shared sacrifice in the federal budget deficit crises. Sanders has the radical idea that we shouldn’t balance the budget on the backs of the poor. For those short on time who can’t listen to his 90-minute speech, the Green Zone’s Q&A version follows—all the facts that show how the same amount of money can be raised if we tax capital gains and dividends the same way we tax work; establish a Wall Street speculation fee of less than 1 percent on the sale and purchase of credit default swaps, derivatives, stock options and futures; prohibit abusive and illegal offshore tax shelters; end tax breaks and subsidies for big oil and gas companies and repeal the Bush tax breaks for the top 2 percent.

Q: How much in tax breaks do we provide the wealthy? A: Over $700 billion.

Q: How much in tax breaks for the wealthy are in the proposed Republican budget? A: $1 trillion.

Q: Who has never had it so good? A: Millionaires, billionaires and large corporations.

Q: Who should share in budget cut sacrifice? A: Millionaires, billionaires and large corporations.

Q: How much can be raised by repealing Bush’s tax breaks for wealthy? A: $730 billion over 10 years.

Q: What is the actual U.S. unemployment rate? A: 16 percent.

Q: What major country has the highest child poverty rate? A: The United States.

Q: How many Americans have no health insurance? A: 50 million.

Q: What will destroy Medicaid and Medicare if it passes? A: The Republican House budget.

Q: Who else will lose health coverage if the Republican budget passes? A: 2 million children.

Q:How many would be denied health care if the Republican budget passes? A: 34 million.

Q: Who can sign a letter at www.sanders.senate.gov to tell the president not to yield? A: Anyone who believes the “wealthiest people in our country and the largest corporations should be asked to pay their fair share as part of deficit reduction.”

I signed the letter. Anyone else for shared sacrifice?