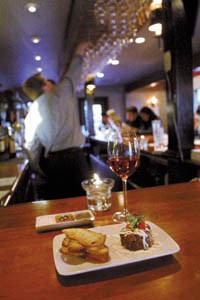 Once just a haven of tasting rooms, the North Bay embraces wine bars in their many forms

Enotecas, bodegas, bistros a vin . . . every country has its own version of a wine bar, a casual hangout where the locals gather and sip regional vintages, and wash down simple foods.

America, meaning not European, never did see its own specific take on a wine bar evolve. Maybe it’s because we were settled by Puritans. Even here, in this Disneyland of food and drink called wine country, the closest equivalent to wine bars became the winery tasting room, where you don’t hang out so much as . . . taste.

Bar by bar, that’s been changing. The past decade’s nationwide proliferation of hip and swanky joints dedicated to the clinking of glasses before and after the sun has set has leaked northward across the San Francisco Bay into our own fertile soil. And while there is a difference between a wine bar and a bar with wine, wine bars are a new enough phenomenon that there’s plenty of room for custom-tailoring the definition of a wine bar to the need and personality of the outlet.

From fancy to funky, spots that offer more than just wine with dinner are drawing in the regular Joe Public who’s increasingly exploring wine, despite (or perhaps because of?) a soft economy. “I think more and more people are getting into wine. The younger generation is coming into it, which is fun to see,” says Josh Silvers, chef and owner of Syrah restaurant in Santa Rosa. Syrah’s wine list features California and French offerings that spotlight unusual varietals. Next month, Syrah will be expanding into a retail space with a wine shop that will feature a tasting bar.

Factoring a tasting bar that sells wines by the glass into a retail shop can make the difference between selling a bottle and not selling a bottle, and it also creates another source of revenue. Of course, the benefits extend to the consumer, too. “For an eighty-five dollar bottle of wine, you don’t have to spend eighty-five dollars to check it out,” Silver says. “With wines that are unique and hard-to-find, they can try it, and if they like it they can buy it, and if not, they didn’t invest a lot of money into it.”

While many wineries in the area have impressive tasting rooms, it can become an out-of-the-way event to visit them. “One of the great things about our wineries in Sonoma is that it’s a discovery to find them–you’ve got to kind of travel around,” says Silvers. A wine bar can bring together wines from a variety of lesser-known local producers under one roof, making it easier to think and taste out of the Chardonnay-Cabernet box.

“For a guest coming to wine country, I think they’re just more open [to different wines] because they’re coming to wine country,” offers Silvers. “And then for the locals, they’re brought up on wine, and they get tired of the same old thing and they want to try something new and experiment, and I think they don’t want to be their parents, in a way. They get their friends into it, and it’s one of those things that starts growing and growing.”

Another way wine bars help make drinking wine an event is by introducing food into the equation. This can be anything from a simple cheese plate or dish of almonds to a small plate, such as a lamb chop with fava beans and celeriac puree, but overall, the message is that wine and good company can still involve food without escalating into a gigantic meal.

“Most people’s interaction with wine does involve food,” says Jessica Gorin, who’s been the chef at J Vineyards and Winery in Healdsburg for four months. Gorin has already cornered the personality of J’s food-friendly wines and created a tasting menu of tiny pâté triangles and itty-bitty stuffed vegetables. When paired with flights of wines in J’s tasting room, the combinations pull out notes in both the food and wine that would otherwise be untapped. J has been doing this in their tasting room since 1999 to emphasize that wine was made to enjoy with food. While not a wine bar per se, it’s all done in the spirit of such a place, and to encourage patrons to play around with combinations.

“There’s definitely been more openness about getting away from the old paradigms of what wines go with what foods,” Gorin says. “If you know that you like Pinot Noir but you know that you want to have fish for dinner, you can try it–Pinot Noir might go really well with the fish, it’s going to depend on how the fish is prepared.”

Wine bars–whether in a wine shop or a freestanding establishment like Willi’s–go beyond just savory bites and virtual day-tripping. They’re fun places to hang out, classy but casual alternatives to another night at the microbrewery.

“A lot of nights, the bar’s pretty full,” says Phaedra DiBono of Twisted Vines in Petaluma. “People even come in by themselves and they’ll just sit at the bar and have some wine. They’ll talk about different wines by the glass, and instead of just getting a glass they’ll get a flight. It’s fun for people, because it’s educational, too.”

In that case, let’s get educated!

J Wine Company Okay, so it’s not a bar bar, but J’s food-and-wine-pairing philosophy puts a new twist on the whole tasting room thing. Test- drive J’s wines as they were meant to be drunk: with clever food pairings, like Picholine olive and onion tart with 2002 Pinot Noir, and sesame seeded and honeyed mascarpone atop a zucchini-bread crouton with the 1997 Chardonnay. 11447 Old Redwood Hwy, Healdsburg. $5/taste; $10/flight. Open daily, 11am-5pm. 888.JWINECO.

Wine Spectator Tasting Table at COPIA More museums should have wine bars; what better to cap off a day of culture? While few people are going to go to COPIA specifically for the wine, it’s not a bad idea. Boasting 49 wines by the glass and 250 by the bottle, the Wine Spectator Tasting Table is refreshingly global in scope, with many unique varietals and obscure producers. 500 First St, Napa. Thurs-Mon, 10am-5pm. 707.265.5820.

Willi’s Wine Bar A very Europe-by-way-of-California place (the name, though, has nothing to do with the famous Willi’s Wine Bar in Paris), with Belle Epoque-inspired art and a lovely courtyard, Willi’s has taken the old Orchard Inn and made it its own. You can have a glass and a nibble in the afternoon, or several glasses and a few plates for a full meal in the evening. Both old world and young and hip, Willi’s is one of the North Bay’s few freestanding wine bars novel enough for tourists but genuine enough for locals. 4404 Old Redwood Hwy, Santa Rosa. Wed-Thurs, 11:30am-10pm; Fri-Sat, 11:30am-10:30pm; Sun, 11:30am-9pm. 707.526.3096.

Wine Exchange of Sonoma Largest selection of California wine in Sonoma (plus a terrific selection of international beers). Before you buy wine there to drink in the now chickenless plaza, why not try a test swirl in the glass first? Proprietor Dan Noreen’s impressive in-store gallery of vintage French absinthe posters really whets the whistle. 452 First St, Sonoma, Open daily, 10am-6pm. 707.938.1794.