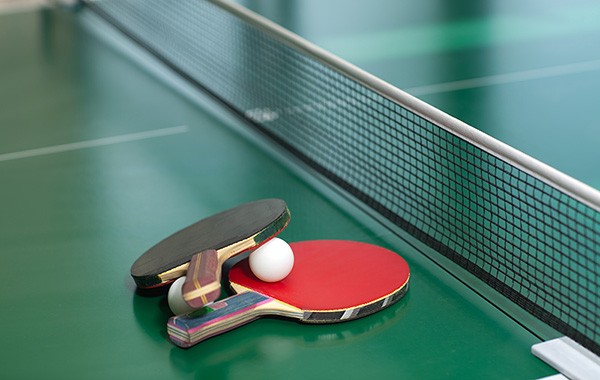 For the Santa Rosa Table Tennis Club, ping-pong is a sport, not a hobby—and don't call it ping-pong

Imagine a typical Tuesday night in suburban Rohnert Park. It’s sleepy, quiet and dark, but inside an unassuming recreation center, energy is bouncing off the walls. Literally. The soundtrack is joyful screams, grunts of disappointment and the chaotic and rhythmic bouncing of a dozen ping-pong balls.

But here, no one calls this game ping-pong, if they’re serious about it. This is the Santa Rosa Table Tennis Club, a charming underground venture that has flourished for more than a decade. Five to seven tables are decked out inside the gymnasium-like space, each section surrounded by unrolled sheets of cardboard, meant to prevent the pesky white balls from bouncing too far and wasting the players’ time.

The premise is simple: drop by, pay $5 for the whole night, receive a paddle and wait for a smiling club member to summon you to a challenge. The person who will welcome you and give you a paddle, however, looks life Gandalf from Lord of the Rings. But as you learn, nothing in the world of table tennis is the way it seems.

The Gandalf lookalike, 72 years young, is David Kent, former anesthesiologist and a table-tennis guru. Kent has a tip and a comment for anyone who shows up, everything from suggestions on improving posture to elaborate explanations involving physics, gravity and magic. He grew up in California and started playing table tennis with his dad around the age of 10. In the ’60s, Kent coached table tennis in Berkeley, then ventured off to serve in the army and later went to medical school.

In the late ’90s, he rekindled his romance with the sport and became a certified coach with the North American Table Tennis Association. Kent relocated to Sonoma County and coached at Sonoma State University, serving as the “only certified coach from here to Oregon.”

In 1997, a colleague from SSU left for Sacramento and passed the small tennis club he established in Rohnert Park to Kent. Kent now rents the space directly from the city and runs the club twice a week, Tuesdays for tournaments and Fridays for freestyle games.

“We’re not a club for beginners,” he stresses from his corner chair, where he watches the players religiously. “It’s not a school either; it’s a club for people who know how to play already.”

Having said that, show up with anything but embarrassing skills and Kent will gladly demonstrate a trick or two, while some of the more experienced players might invite you for a game and some informal coaching.

On a given Tuesday, the crowd is diverse, to say the least: a fast-playing Asian teenager, a local star, middle-aged men, a couple of harmless-looking grandmas training for a seniors tournament, a mother with a 12-year-old spending some quality mother-and-son time together. All of them have one thing in common: passion for the overlooked sport. And make no mistake. It is a sport.

“It’s surprisingly athletic,” gushes Rich Wolf, a fair-trade consultant from Graton. He’s been coming here for five years. Wolf found out about the club from a couple of long-playing members who showed up at a Graton tournament, “and kicked my butt,” he says. “You can age gracefully with it, that’s really nice.”

Jared Levy, a family therapist from San Rafael and a stay-at-home dad says he lost 20 pounds thanks to the club. When he tells people he looks good thanks to table tennis, they often laugh. He likes the hours, 8pm to 11pm on Tuesdays, 7pm to 10pm on Fridays. The club provides an unusually late opportunity to work out safely in what’s called a “a highly sociable environment.” Levy stresses the fun factor, as well as the element of surprise.

“You’ll never know by looking at someone how good they are: an athletic-looking young person can be terrible, but an overweight 65-year-old woman can destroy you.”

When asked why table tennis is such a niche pasttime, Levy says it “gets a bed rep for being just a ‘game’ when it’s really a sport.”

His friend Alan Estrada, a certified nurse and a first-timer here, agrees. “It has more skill than what meets the eye,” he says. “When you watch it on TV, players might look like they’re just passing a ball, so people don’t take it seriously, but when you try it and see how good someone can be, you understand it’s an amazing sport.”

Both praise an ingredient unique to the club: Kent’s guidance and vast knowledge.

“In terms of friendliness, I’d give this club a perfect 10,” says Estrada, who lives in Alameda and hopes to come more often.

Ten minutes later, the grandma duo take on a couple of players half their age, and their friendly faces become iron masks of determination. Spinning techniques send the balls flying in all directions, blindsiding opponents and marking the women as potential winners. Around them, each player is busy working on his or her very own moment of glory. In here, table tennis—underrated, lacking celebrity representation, less than glamorous—is treated with the respect of a Super Bowl game. Only instead of passively watching, Santa Rosa Table Tennis Club members are giving it their best shot.

To see the Santa Rosa Table Tennis Club in action, check the video on the online version of this story at Bohemian.com. For more details on the club, visit srttclub.com.