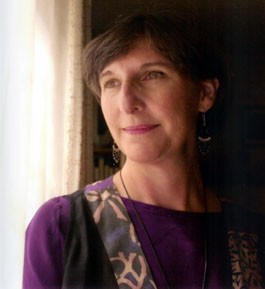 Terry Ehret and the aesthetic of interruption

Writing, for Petaluma poet Terry Ehret, has been quite a balancing act. In a busy household, in which she and her husband raised three daughters, it wasn’t often possible to find uninterrupted time. Rather than fighting the situation, Ehret says that she “embraced the aesthetic of interruption,” as a way of mirroring her reality and honoring the fragmentation common to women’s lives.

A native Californian and graduate of Stanford University and the MFA program in creative writing at San Francisco State, Ehret moved to Petaluma in 1990 with her growing family. Her first book, Lost Body, was selected as part of the prestigious National Poetry Series and published by Copper Canyon Press. Here’s a prose poem from that collection.

“At the End of the Season the Apples”
At the end of the season the apples droop over the lobelia.
They make room for themselves in my flower boxes.
It’s OK with me. The time for pruning and sweeping the yard
clear of debris is coming. Waiting patiently allows
the disorder of my life a kind of grace, the natural desire of all things.
Sometimes late at night I fall asleep on the couch deliberately,
avoiding the rituals of going to bed: brushing my teeth,
buttoning my nightgown, clearing the air of arguments
to make room for two separate lives in the same room,
to make peace with the darkness we are about to
trust ourselves to. This is all so much work, and it is late,
and the sleep I allow to rush over me, completely unprepared,
is rich and dream-laden and satisfying, as if I had come back
to my native language.

A conversation with Ehret is peppered with the word “authentic.” That’s how she measures her work’s value—is it authentic? In order to achieve authenticity, to not have the writing descend into self-consciousness, she balances the conscious with the unconscious, “to try and find out what’s on my other mind.”

Ehret’s third book, Lucky Break, published earlier this year by Sixteen Rivers Press, is a dazzling collection, both accessible and challenging. It contains a suite of poems, “The House That Held Me Dreaming,” inspired by Gaston Bachelard’s landmark work The Poetics of Space, which operates at the imaginative intersection of philosophy and psychology, where so much poetry resides. Here’s the final poem of the suite, which also seems to channel a bit of Whitman’s energy. I recommend reading the poem out loud, a few times, as I did, to capture its cadence and power.

“Intimate Immensity”
Say the sky.
Say the wind galloping across the grass.
Say the grass by the sea by the sea waves
and their own rising and falling

eternity. Say the turning planet.
Say the fall of the most recent evening.
Say lie down now and say
much sooner than you thought

the stars have all rearranged themselves in the night
while I was—What was I doing? What?
Say then the darkness behind the stars,
wherever it is going, back to the first moment

the tiny weight shifted toward
my body or yours, and the intimate
explosion of love. Say in all this immensity,
who.

A former Sonoma County poet laureate, Ehret is an invaluable resource in the local writing and intellectual community. She’s taught for years at the Petaluma campus of Santa Rosa Junior College and at the Sitting Room in Cotati, where her workshops on everything from Beowulf and Grendel to Yeats have become legend. Ehret also compiles an excellent monthly newsletter of local literary happenings, available at www.literaryfolk.wordpress.com. For more on Ehret and her work, see her website, [ http://www.terryehret.com/ ]www.terryehret.com.

Novelist Bart Schneider was the founding editor of ‘Hungry Mind Review’ and ‘Speakeasy Magazine.’ His latest novel is ‘The Man in the Blizzard.’ Lit Life is a new biweekly feature. You can contact Bart at [ mailto:[email protected] ][email protected]