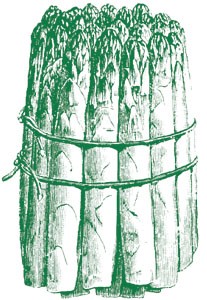 Asparagus offers all this and purple rubber bands too

The moment that asparagus fans have been waiting for all year has arrived. It’s asparagus season now, and the little green bundles of joy plummet in price from $3.99 a pound to “buy one, get one free.” Get it while it’s hot, because when asparagus comes around, you gotta eat it up.

Distinctive, versatile, and luxurious, asparagus holds a treasured spot worldwide. Americans favor thinner stalks of green asparagus, whereas it is the thicker, white asparagus of southern Germany that many Europeans treasure. Ancient Romans coveted asparagus, serving it with a pungent sauce of fermented fish. In China, asparagus spears are candied and served as special treats.

California leads the nation’s asparagus production with more than 50,000 metric tons harvested annually. Although it is available year-round, asparagus tastes best during its natural growing season: late March through June. Since asparagus begins to lose its flavor as soon as it’s picked, it’s important to buy the freshest spears you can find (local, if possible). Look for firm, smooth stalks and closed tips when buying, and take a peek at the cut ends of the stem: The drier they are, the more time has passed since they were picked. If you’re going to keep asparagus around for a few days before cooking it, store the bunch in the refrigerator, upright in a few inches of water, just like flowers.

There’s no consensus on what the best type of asparagus is–thick or thin, green, white, or purple; it sort of depends on the purpose. White asparagus, a subtly earthy delicacy, is grown under mounds of dirt to prevent its exposure to light, a labor-intensive process that creates a less grassy, slightly bitter flavor. Purple asparagus looks exotic, but–alas!–turns green when cooked.

Thinner, pencil-sized stalks are more tender and don’t need to be peeled. Their dainty size makes them ideal for a crudité platter, slaw, or salad; if the asparagus is especially sweet, you can even serve it raw.

Thicker spears have a tough skin that may need to be peeled from the bottom end to just under the tip; a heavy-duty vegetable peeler is perfect for this task. Even though it requires extra work, thicker asparagus is found by some to have more flavor and a more succulent texture.

Thick or thin, the lower third of the stalk is tough and woody, and needs to be removed. Some just take the bunch and cut straight through, but you can snap the bottom of the stalk off, which will naturally break right at the woody part. And save the bottoms, which are excellent for stock. You can also infuse canned stock with asparagus tips if you are making risotto.

You don’t want to cook asparagus al dente, but you also don’t want to boil it to a limp, slimy mess. When you can easily insert a knife into the thickest part of the stalk, it’s done. My favorite method is pan-steaming, a fast and effortless way to cook a pound of spears (perfect for omelets or a small dinner). Simply lay the prepared raw asparagus in a skillet and add about a quarter inch of water. Cook over high heat; if it looks like most of the water has evaporated, add a little more. After five minutes or so, it’s done, and you don’t have to wait for any water to boil.

Another easy way to steam asparagus is to stand the whole bunch–tied with kitchen twine, if you want to be tidy about it–upright in an inch or two of salted, boiling water in a large saucepan, and cover. If you boil or pan-steam asparagus for a pasta, reserve some of the flavorful cooking water and add it to your sauce.

Asparagus stands up to bold flavors and rich sauces, so it’s great as an element in more complex dishes–stir-fries, savory bread puddings, sandwiches, omelets, and even curries–but for a simple treat, all it needs is a quick dressing. A squirt of lemon, a dip in bagna cauda, a drizzle with sesame oil, or a kiss of browned butter will make asparagus’ flavor shine. In England, thick asparagus is served as its own course, often with hollandaise.

One thing asparagus does not go well with is wine; a member of the lily family (along with onions and leeks), its sulfur compounds make wine taste bitter. This has never deterred me from indulging, to be honest, but just make sure that you don’t waste a good Chablis by serving it with asparagus. If you insist on pouring wine, stick to a light Sauvignon Blanc or a Riesling.

Or, you can put the asparagus in the drink: At the upcoming Stockton Asparagus Festival (April 26-28), a (hopefully small) percentage of the 20,000 pounds of asparagus served will go into aspara-ritas, yet another twist on the classic margarita–which is, even for the versatile asparagus, a stretch. Luckily, you need not resort to putting it in mixed drinks: Asparagus is perhaps best when cooked simply and eaten with your fingers, just as the Romans did.

Now, for that distinctive after-dinner smell: Eighty percent of the population will develop an odor in their urine after eating asparagus. The majority cannot metabolize aspartic acid, a natural chemical that creates the odor, so it goes straight through our system, making our urine stink. Another theory has it that only certain people have a gene for smelling the pungent chemicals, while others believe that the gene for producing the chemical in the first place is the missing link. In any case, you’re the only one who has to know if asparagus makes your pee smell or not, so what difference does it make? Eat, eat!

Preheat oven to 450 degrees. Trim and peel a pound of asparagus; place in a roasting pan and drizzle with a scant tablespoon of olive oil. Sprinkle with salt and the zest of half a lemon; toss and roast, turning asparagus every few minutes. When the asparagus is almost ready but not quite done (10-20 minutes, depending on thickness of the stalks), scatter with 4 or 5 pitted, slivered black olives and enough shaved parmesan cheese to suit your taste. Continue roasting until cheese just starts to brown, and serve.