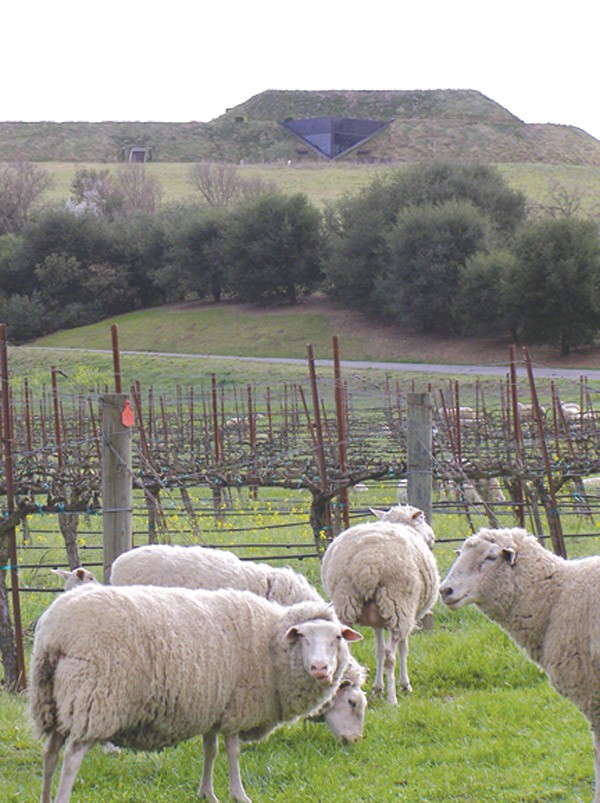 Yet another treeless hilltop amid a sea of similar hilltops, this one doesn’t stand out much, until you turn into the drive. Above a vineyard teeming with spring lambs, Artesa is sculpted into the earth like some ancient Briton hill fort, while a flight of steps leading to the visitor center—robed in native grass, pierced with obsidian-black glass—evokes a Mayan temple. The really striking, and strangely vertiginous, sight awaits upon the last step: a long pool of darkened water that appears bottomless, yet floating in air, far above Napa Valley and the San Pablo Bay.

It’s a fantastic view. But it’s not this naked hilltop that has Artesa in deep water with residents and environmentalists miles away in Sonoma County; it’s their plan to log 170 acres for a proposed vineyard. Before delving into the controversy, let’s give their wines a chance, shall we?

Arranged around a courtyard studded with tables and grammar-school-sized chairs, the tasting room is abuzz with chatter over flutes of sparkling wine. Staff, while juggling bottles for a constant flow of visitors, are friendly and attentive. I ask one: Has anyone else asked about the controversial Annapolis project? Yes, he says, but not to worry, it’s been misrepresented in the press. It’s only 30 acres, and no trees will be cut down!

“That would be wishful thinking,” Artesa spokesman Sam Singer acknowledges. While that tasting-room fellow might have painted an inaccurately rosy picture, Singer says that the environmental impact report concluded that the project would have minimal impact, and that they would also preserve 150 acres, including two old-growth redwood trees on the site.

“They’re just putting aside stuff that they had to,” counters Chris Poehlmann of Friends of the Gualala River. “And the stuff that’s too steep, that they can’t farm anyway. They put that into the set-asides to make it look like they’re doing something.”

As much as some readers might like us to tilt against sawmills, that is not the business of Swirl. While a series of Bohemian stories has scrutinized the issue of forested-hilltop vineyard development, we’re looking for great Pinot, and all might be well if only it could be grown here on the already-treeless, windswept slopes of the Carneros . . .

But what’s this? Artesa’s 2009 Artisan Series, Carneros Pinot Noir ($40) is a heady rush of fresh Bing cherries, with a seamless, smooth finish. Artesa, owned by the Spanish Grupo Codorníu, has brought out all the sweet, cherry fruit of a 2009 Alexander Valley Tempranillo ($32) with a defter hand than contemporaries. The 2010 Albarino ($26) is as salty and fresh as sea spray, while the otherwise appealing 2009 Artisan Series, Napa Valley Chardonnay ($40) bonks the nose with a hard plank of oak. That tree, at least, might have been better left standing in the forest.