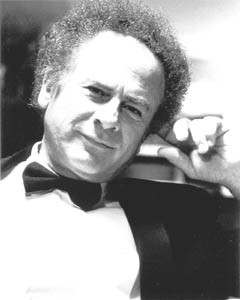 For anyone who has been wondering, this is what is, or was, on Art Garfunkel’s answering machine:

Only it’s not Art singing. It’s his son, James, who’s 11 and a half now. “I’m nuts about this boy. He’s just a wonder. It’s like a phoenix coming out of . . . never mind,” says Art from his office in New York, his mind trailing off for the slightest second. Otherwise, though, Art’s tone is focused, intense, and patient–to the point that referring to the legendary singer with a curt, journalistic “Garfunkel” does not seem to do the man justice. Art it is.

These days, outside of his music career–which has been amazingly active ever since Simon and Garfunkel split up in 1970, encompassing some 10 solo projects–Art is known also for his long walks. He’s already crossed America, and he’s working his way across Europe now.

“Usually I’m a loner,” Art says. “I’m headed for Istanbul, and I’ve gone now through about half of France. The last leg was about 140 miles. It’s a nice leg of . . . continuity, a great break from the New York City life I live, which is not enough horizon.”

Walking 140 miles leaves much time for pondering. “I look for parallels: What is there in God’s natural world that is like human nature? What are we humans inclined to do, and what’s going on in nature that’s doing the same thing?”

This is the stuff that eventually makes its way into Art’s poetry. He came out with a book, Still Water, in 1989, and those poems have, for the first time, morphed into songs on his new album, Everything Waits to Be Noticed.

A collaboration with singer-songwriters Maia Sharp and Buddy Mondlock, the album’s seeds were planted when producer Billy Mann suggested that the three write together. At that point, Art hadn’t heard or met either musician.

“We met when I began to trust Billy Mann as a record man,” he relates. “He said, ‘I want you to meet these two people that I see you writing with and singing with, so come to Nashville–Buddy’s working on one of your prose poems.’ And that excited me a lot, because I believe in my writing, and nobody’s successfully tried to make my [poems] become songs.

“It was thrilling to see him give me that perfect moment from one of my things. Maia Sharp flew in the next day. We turned to my book, and they said, ‘We like one of your poems, “Wishbone”–“A wishbone was broken, I’m left holding the smaller part. . . .”‘ We all started working on it, and right around there I became a writer!”

Since then, Art’s been performing some of his songs. “It’s great . . . it’s similar to the normal show I do, but it’s got a plus factor. Each time I execute this song compared to the others, I step back and go, ‘Gee, that satisfies me. That’s exactly my taste.’ And then I think, ‘I know–I wrote it!'”

Everything Waits to Be Noticed refers to a notion Art’s friend Jimmy Webb once related. “Scientists look at microorganisms in a lab, and they see these little microbes do something and it will be recorded, and then they’ll turn off the lights and go home. Overnight, the organisms do much, much more of it–whatever it is.

“And that really intrigued me. When things are not watched, what kind of existence do they have? The old ‘If a tree falls in the forest . . .’ It tugs at my mind in a fertile way.”

It’s that tugged-at mind that led Jack Nicholson (who starred with Art in Mike Nichols’ film Carnal Knowledge) to give Art his enigmatic nickname: the G. “It makes me laugh, because I associate it with Jack [Nicholson]. He’s been calling me the G for years and years . . . or the New G. I’ll pick up the phone, ‘Jack! It’s the old New G!'”