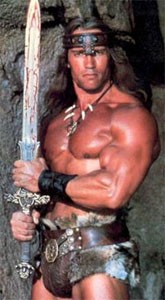 Everyone’s guide to flirting with Armageddon

If someone were to hang a placard above the entrance to the California Primary 2004, it might read something like this: “Abandon all principals, ye who enter here.” Whether you’re conservative, moderate, liberal or some political shade in between, there’s just about no way to get out of the voting booth this time around with your ideals totally intact. Such is the intellectual violence of this season’s contest.

The culprit, of course, is that mythical bottomless pit known as the state budget, which last November figured prominently in the successful recall of Gov. Gray Davis. Tech-bubble exuberance and legislative gridlock got the better of the lackluster Davis. His replacement, Republican Gov. Arnold Schwarzenegger, star of some of the most violent action movies ever made, now threatens voters, if they do not pass his Economic Recovery Plan, with Armageddon.

Unfortunately, it’s not a merely a threat; it’s a cold, hard economic fact. If Arnold’s big package falls limp, nearly every analyst agrees that state services will be cut as much as 20 percent across the board. Complicating the matter, the two initiatives composing the governor’s big package–Proposition 57, a hefty $15 billion debt-relief bond, and Proposition 58, the California Balanced Budget Act–are tied together.

If Proposition 57 fails, Proposition 58 cannot be enacted and vice-versa. Voters must pass both, or the budget will spiral downward into those icy levels where Wall Street degrades the state’s already abysmal bond rating below that of Buenos Aires, potholes crater the streets, the homeless stalk the sidewalks and, God forbid, even moderate Republicans openly suggest taxing the rich.

Armageddon, indeed. The rats are once again deserting the ship, leaving voters to patch, shore and bail for themselves. Actually, it’s the children of these voters who’ll be paying the damages, in the form of principal and interest on the multibillion dollar bonds that have been proposed to keep the state vessel afloat.

In addition to Arnold’s big package, there’s Proposition 55, the Kindergarten-University Public Education Act, a $12.3 billion school bond. Then there’s Proposition 56, the Budget Accountability Act, which seeks to lower the Legislative supermajority requirement to pass budgets and budget-related tax increases from 66 percent to 55 percent, supposedly breaking that legendary legislative gridlock. It also forces the governor and the Legislature to work without pay until a budget is passed if the annual June deadline is not met.

During years of surplus budgets (a fairly optimistic projection, if the Rapture is indeed upon us, as President George W. Bush seems to believe), Proposition 56 creates a “rainy day” fund in which specified increases in revenue will be deposited for use during future economic downturns. The initiative also provides voters with tools to hold lawmakers accountable, requiring summarized budget information on state ballot pamphlets and the listing of legislators’ voting records on the Internet.

As if all that’s not confusing enough, registered Democrats must deal with the causus belli for the election, the Democratic presidential primary. As of this writing, the race has been whittled down to two contenders, senators John Kerry and John Edwards, but 10 candidates remain on the ballot. Is choosing a candidate other than one of the two anointed frontrunners a wasted vote?

The answer is complex and depends more on the individual voter’s political temperament than any advice the Bohemian might be able to provide. Same goes for the propositions. With that in mind, the following text breaks down the electorate by political types: conservative, moderate, progressive and two flavors of maverick, Dean and McCain. Adhering to the ideals of these individual types should provide a handy guide for warding off, or ushering on, Armageddon, whichever the voter’s preference might be.

Progressive: The progressive category includes Green Party members, far-left-leaning Democrats and independents who place the value of community over those of industry. While radical in nature, the progressive is constrained in the current political climate by this devotion to community, which is after all what the Gropenator threatens with Armageddon. Thus, the following selections seem prudent, if not necessarily obvious.

President: Dennis Kucinich. The senator from Ohio opposed the war against Iraq when it counted and has a proven record championing progressive causes.

Proposition 55: Vote yes. At least you know where the money for this $12.3 million school bond is going. Sort of.

Proposition 56: Vote yes. It’s not as easy a decision as progressives might at first think, though. Lowering the supermajority requirement from 66 to 55 percent might break gridlock now, but suppose some day the Green Party finds itself in the position of today’s conservative legislative minority, which wields enormous influence over the budgeting process? Be nice to ball up the latest deforestation project in committee, wouldn’t it?

Proposition 57: Vote yes. As much as progressives might want to see Schwarzenegger fail, too many people will get hurt by the cuts that will be implemented if propositions 57 and 58 don’t pass.

Proposition 58: Vote yes. Anyone who thinks the so-called Balanced Budget Act will put an end to the state’s financial shenanigans is probably smoking angel dust. But if you don’t vote for 58, 57 fails too.

Maverick, Flavor One: Realm of the Deaniacs. This is a swing category for registered Democrats, and it’s where the action is this election cycle. Like their favorite presidential candidate, mavericks are mad, impulsive, pissed off. Their anger courts their own doom, but they don’t care. They’re mad as hell and they aren’t going to take it anymore.

President: Howard Dean. A vote for Dean is like flipping the bird at Kerry and Edwards, both of whom wilted while George W. Bush and the neocons’ imperial sun was rising. At convention time, the vote counts, when it comes to shaping the party’s platform.

Proposition 55: Vote yes. At least you know where the money for this $12.3 million school bond is going. Sort of.

Proposition 56: Vote yes. Deaniac mavericks like to get things done. Reducing the supermajority requirement will break the gridlock in the short-term and provide Democrats (your party, after all) the leverage necessary to raise taxes on the rich. Those legislators who don’t play along can rest assured that the Mavericks will be out there, tracking their votes on the internet.

Proposition 57: Vote no. You recognize Arnold’s big package for what it is: yet another tax increase in disguise as a billion dollar bond issue. Some disappointed mavericks can’t believe they voted for this clown in the recall.

Proposition 58: Vote yes. Just to piss the governor off.

Moderate: Playing It Safe. Moderates can be Democrat, Republican or Independent. They can be conservative or liberal, depending on the occasion. They represent the largest block of voters, the great whitewashed middle. All this talk about Armageddon scares the hell out of them, and they vote accordingly.

Proposition 55: Vote yes. Moderates are suckers for school bonds and they know where the money is going. Sort of.

Proposition 56: Vote yes. Moderates hate confrontation, and since the 66 percent supermajority was passed in 1979, the legislative process has become entirely too argumentative. A simple majority would be fine with most moderates, so 55 percent is entirely agreeable.

Proposition 57: Vote yes. No one knows what an estimated 20 percent cut in state services across the board looks like, but if it’s any worse than Arnold’s film version of Armageddon, End of Days, the state is in deep shit. Moderates don’t like Armageddon. Too messy, too final.

Proposition 58: Vote yes. The moderate has no other choice. Remember, 57 and 58 are linked.

Maverick, Flavor Two: Memories of McCain. This maverick is a registered Republican or Independent who tends to think on the conservative side, but isn’t shy about occasionally breaking ranks with party ideology.

President: Ineligible, but if the California primary was open, McCain mavericks would vote for John Edwards. It’s the best shot at keeping the Democrats divided.

Proposition 55: Vote no. Unlike their more liberal cohort, these mavericks know a tax increase when they see one.

Proposition 56: Vote no. These mavericks also realize the power the two-thirds supermajority grants the conservative minority in the Legislature.

Proposition 57: Vote yes. After all, Gov. Schwarzenegger is a Republican. He deserves the benefit of the doubt, even if this proposition, which borrows money to pay the state’s debt, goes against everything such mavericks stand for.

Proposition 58: Vote yes. The Terminator was a great film.

Conservative: Contemplating Total Negation. Despite what you might have heard, conservatives aren’t necessarily wild about the results of the recall. Arnold is clearly a heathen who has so far refused to take the “no new taxes” pledge. Unlike the other groups here, this hard-bitten lot has no fear whatsoever of Armageddon. Like their commander in chief, they say, “Bring it on!”

President: Ineligible, but if the primary was open, Al Sharpton. The far right helped fund his campaign, after all.

Proposition 55: Vote no. Borrow money to fund schools where a child can’t say a prayer or the Pledge of Allegiance? Fuhgeddaboutit.

Proposition 56: Vote no. Giving up the only power conservatives have in the state is total insanity.

Proposition 57: Vote no. No matter what the conservative California Taxpayers’ Association says, a little Armageddon never hurt anyone.

Proposition 58: Vote no. Conservatives favor balanced budgets, but with Armageddon within in such easy grasp, why take a chance? Vote no, and bring it on.