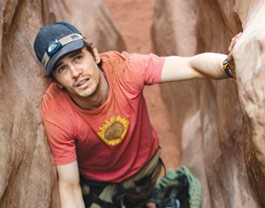 This is the kind of horrific thriller that feels so good when it stops. Might it feel better if it didn’t even start in the first place?

127 Hours is Danny Boyle’s version of the true-life story of climber Aron Ralston, who, in 2003, became pinioned under a half-ton boulder in a remote Utah canyon. What he did to survive—amputating his arm—became worldwide news, and those who prayed a movie would never be made of it will be teased early on. As Aron (James Franco) packs for the fateful trip, for instance, we see his face from the inside of a cupboard, where a Swiss army knife lies waiting.

127 Hours records an ordeal so singular, Poe couldn’t have improved on it. Unfortunately, director Boyle (Slumdog Millionaire) starts it with a burst of relentless motion, the type famously seen in his breakthrough Trainspotting. (This ADD style has been thoroughly appropriated for sports-drink commercials, which is appropriate, because the products more or less advertised in 127 Hours are Gatorade and Coors.)

The title sequence shows the crowded world—driving, praying, rushing—all at once on triple-screen. Twenty-something Aron is running away from this hectic existence, first driving through the night in his truck into the desert and then speeding on his mountain bike over the hills.

Ralston isn’t an ordinary Joe. Franco plays him as a showman, recording his thoughts with a digital camera. (At times, Aron imagines himself as a guest on a hallucinatory TV show, as if forecasting the real-life Ralston’s later fame as the subject of a major motion picture.) The camera plays back visions of the life that he’s likely to lose, and the battery never seems to go dead. There are other video-game essentials; for example, a digital thermometer onscreen menacingly recording the drop in the temperature.

The film is the work of someone terrified of boring the audience. And yet all this relentless flash—the camera even snakes up inside the tube of a CamelBak water carrier—can’t illuminate something that was essentially a terrible incident. Instead, it finds a moral lesson: Aron should have connected with the multitude; with his plaintive mom, whose calls he never returned; with the girlfriend who dumped him for his breeziness.

Clémence Poésy plays the girl, and she’s an oasis in this picture, a refreshing vision in a movie that’s loaded with tight close-ups of a man expiring slowly. Her parting line, “You’re going to be so alone, Aron,” underscores the weak idea of the cave ordeal as a kind of payback for someone young and disengaged.

Franco’s visceral acting in the service of this horror story should be praised, even if it’s not a pleasure to watch. 127 Hours will effect anyone not numbed by disgust, but equally numbing is Boyle’s attempt to scratch up a narrative. The details—like an ant’s mandible pinching Aron’s face—mirror the sense that Boyle had ants on his spine, that he was without enough calm to make visions of a home life look homey or a lover look compassionate or a desert look serene.

Watching 127 Hours, the audience ends up trapped themselves: trapped between the longing to see Aron just get it over with and the longing to not see it at all.