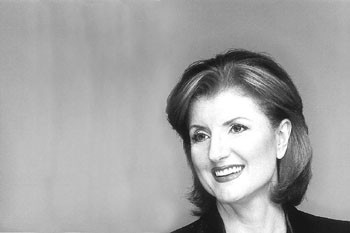 Buy ‘Pigs at the Trough: How Corporate Greed and Political Corruption Are Undermining America’ by Arianna Huffington.

Tough Enough: Arianna Huffington has taken on the sacred cows of conservative politics in her Salon.com column.

If you want to take advantage of Bush’s $75,000 SUV tax break for a new Hummer, you’ll have to leave town. Though a few Sonoma County auto dealers sell used Hummers, none handle new models of the world’s largest domestic military vehicle.

That doesn’t mean Sonoma County is Hummerless: Arianna Huffington will feel right at home. The force behind a provocative anti-SUV ad campaign that links SUV drivers with foreign oil dependence and therefore with terrorists, Huffington will speak in Sonoma on Feb. 11, sponsored by the Praxis Peace Institute and Readers’ Books.

Georgia Kelly, director of Praxis, met Huffington “at a campaign finance reform meeting at her home in 1999,” says Kelly. “I invited her here because she puts the pieces together. We live in a world where most politicians, columnists, and TV newscasters compartmentalize the issues. When Arianna acknowledges the connections between SUVs and war for oil in Iraq, or deregulation and Enron executives’ plot to cheat Californians and make themselves rich, she is promoting holistic politics.”

Huffington’s topic in Sonoma will be her latest book, Pigs at the Trough, a pithy and riveting indictment of corporate criminals and the corporate government that rewards their psychopathic behavior. In a recent interview, I asked Huffington, once the wife of conservative Republican Michael Huffington, a few questions that aren’t addressed in Pigs.

What led you to switch from conservative to progressive politics?

I have always been interested in just one issue: how to help those left out of the good times, out of our prosperity. At the time when I was a Republican, I believed that the private sector would step up to the plate and provide a lot of the solutions for our social problems. Then I saw firsthand how truly difficult that was. It was much easier for me to raise money for an art show or fashionable museum than for a homeless shelter. It was this experience, as well as diving into political issues twice a week [for my column], that led to my political evolution.

I have always been a social moderate–pro-choice, pro-gun control, pro-gay rights. When I stopped being a Republican, I didn’t become a Democrat. I moved to being an independent with no allegiance to either political party. I believe that the political system is broken, and that we need people–individuals–to find leadership potential within themselves and begin to make a difference at the grass-roots level.

How do you feel about plans to escalate the war in Iraq?

I do not trust the administration’s reasoning or its intentions here. I believe that invading Iraq would increase our vulnerability to terrorist threats at home. I also believe that had it not been for the fact that Iraq has such massive oil reserves, we wouldn’t be contemplating invading Iraq. If North Korea had oil reserves, things would be very different.

What do the Democrats have to do to get back in the game?

If they’re going to bounce back in 2004, they need to stop living in denial and start accepting responsibility for their spectacular crash-and-burn. The problem was that they failed to have anyone out there on the campaign trail or in the House or Senate delivering any kind of galvanizing, opposing message. And it’s not as if there aren’t plenty of urgent issues to choose from: the limping economy, the soaring deficit, corporate corruption, an energy plan crafted by the oil industry, the undermining of virtually every regulatory agency, the insanity of Bush’s tax cuts.

Well, I guess that last one would have been a bit tricky since 12 Democratic senators sided with Bush on it, including those two former senators Jean Carnahan and Max Cleland, both of whom voted yes on the Iraq resolution. Pandering to the president didn’t seem to help them much.

Where is the Bush administration most politically vulnerable?

On the domestic front and in his treatment of people who have been left with no healthcare. We have over 2.5 million people who have lost their jobs since the century began. The domestic priorities are so askew–with unemployment, people losing billions in pension funds. In the context of this amount of suffering and turmoil, their chosen priority to end the double taxation of dividends is truly staggering.

Do you see any possibilities for an effective progressive coalition?

Yes. I am very optimistic about that. I think this is a promising moment. As we are confronted every day with the abuses of the public trust in Washington, public confidence and the public interest are being undermined. There is more and more engagement and the realization that we do have the power to change things. [For example], Kissinger is not chairman of the [9-11] truth-finding commission. That is not because of the Democrats. Trent Lott is no longer minority leader of the Senate. That’s because of the people, the Internet. There are many instances of success when the public really makes its voice heard.

Do you think it’s possible to have similar success regarding Iraq?

I think it’s incredibly encouraging that we have an antiwar movement growing before we have gone to war.

That’s not important right now. Over the next nine months, the real opportunity for reform is to change the context in which the political debate occurs. If that happens, the politicians are going to be singing a different tune.

In America, most of the great social reforms have not been initiated by politicians in Washington. Lyndon Johnson’s hand, for example, was forced by the Civil Rights movement. There is an enormous amount we can do. I’m heading out on a 12-college tour with my book, starting with Harvard. We need to galvanize young people, who don’t have mortgages to pay, who don’t have kids to put through college, and who have the time and energy to build a movement.