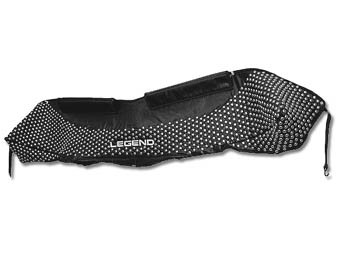 Objects Of Affection: Randy Hussong’s work incorporates cars, beer, and bras–perfect fodder for a fetish show. Shown: ‘Bra for a Legend, or Does Madonna Drive an Acura?’ (1991)

Artist Randy Hussong is inspired by the good things in life

It’s not easy being a hot-rod-loving, beer-drinking kinda guy in Napa Valley. But if you put your mind to it, it can be a helluva lot of fun. Randy Hussong, one of nine artists whose works will appear in the di Rosa Preserve’s exhibit “Fetish: Objects of Power and Desire,” has been having a good time as the oddball artist of ritzy St. Helena. He says one of the best parts about living there is that, as a faculty member in UC Berkeley’s art department, he’s able to “get out of here three times a week and go to Berkeley. That’s my sanity.”

Nah, just kidding. Even though Hussong feels he doesn’t quite fit in, he likes his community and believes it’s a good place for him and his wife to raise their seven-year-old son. Plus, the wine-snob aspect of the area inspires lots of chuckles. And that’s a good thing, because Hussong considers his sense of humor to be one of the driving forces behind his art.

Take, for example, the concrete beer bottles he’s been handing out as gifts. “My wife and I kept getting invited to all these fancy parties, and everyone was showing up with these expensive bottles of wine,” he says. So Hussong created the cast beer-bottle sculptures and gave those out instead. As the bottles began appearing in the homes of the elite, gift shops and galleries took notice and began carrying the artwork.

Hussong has so far created over 700 beer bottles, and they’re strewn throughout the wine country. Sometimes he’ll drive by a house and see one as part of a flower-bed arrangement. He’s shown up at parties and seen his artwork proudly displayed on pedestals. Once, he came to the dinner party of someone who’d received a bottle as a gift from someone else and didn’t know who the artist was. “They were using it as a doorstop,” Hussong says with a laugh.

“I love that whole question of high art and low art. Is a concrete beer bottle high art or low? Should it be on a pedestal, or should it be a doorstop? Is winemaking high art? Is beermaking low art? I like to challenge people’s notions of what art can and cannot be.”

And the fact that the word “Clone” is cast on the bottles opens a whole new can of worms. Perhaps the word is there because, as Hussong says, “I make my own homemade beer, and you have to use one batch to pitch the next, like you would with sourdough bread, meaning that each batch is a clone of the last. So if you know anything about the art of beermaking, you know the word ‘clone’ could signify that.”

Or maybe the word is there because “all the snooty wine snobs like to talk about the wonderful complexities of wine, but in their eyes, all beer tastes the same. To them, beers are all clones of each other.”

Hussong’s work isn’t all about beer, though in general much of his art plays with multiple meanings. For example, his piece in the di Rosa show is called Bra for a Legend, or Does Madonna Drive an Acura? (1991).

First, he purchased from the manufacturer a car bra made specifically for an Acura Legend. (A car bra is a cover, usually made of black vinyl, which protects the front bumper.) Of course, the factory had embossed the accessory with their logo, so it says “Legend” in the middle.

Next, Hussong created two cone-shaped protrusions on each end of the bra and added some metal studs. Keep in mind, he made this particular piece during Madonna’s heyday. And who can forget that legend cavorting about onstage with those cone brassieres? A fetish if there ever was one.

A fetish is an object regarded with extreme reverence or devotion. The “Fetish” exhibit has it all: artworks that explore the fetishism of perverse sexual fixation, of consumer goods, and of sacred and secular devotional items. The show’s curator, di Rosa curatorial assistant Ben Cooper, says the show suggests “the fertile potential of our personal and cultural obsessions to become raw material for powerful and engaging art.”

The di Rosa Preserve has nine of Hussong’s works in its collection, and seven of them, including Bra for a Legend, have something to do with cars. “I’m California born and bred,” Hussong says. “I was raised in the ’60s, and my dad took me to all those drag races and car shows. Car culture is a big part of my life.” It’s also, by extension, a big part of his art. His conceptual sculptures are often marked by references to cars and car culture as a way of exploring popular culture in general.

Before Rene di Rosa ever heard of Randy Hussong, the artist had heard about him. “Back then I was living in San Francisco, and all us artists knew about Rene because there weren’t many serious collectors in the area,” Hussong recalls. “But he and Veronica [di Rosa’s late wife] hadn’t started the Preserve yet, so the collection was still private and not easy to get to see.”

One day Hussong learned that the di Rosas were throwing a political benefit. The $50 ticket included a viewing of the collection, so Hussong’s mother-in-law bought tickets for the artist and his wife.

“I felt so out of place at that thing,” Hussong recalls. “It wasn’t at all an art crowd. I just kind of kept quite and to myself most of the night. And then Rene pulled up in his Rhinocar and I thought, ‘What a hoot!'”

The 1976 Oldsmobile, which has the head of a rhino for a hood ornament, is covered with all types of knickknacks and is the work of Petaluma artist David Best.

Di Rosa then gave a short talk, Hussong says, and all the while he kept bending over and picking up nails that had fallen on the gravel during some earlier construction.

Later in the night, Hussong says, “Rene was pouring wine, and on the wall behind him, written in black crayon, was ‘The Act of Drinking Wine with Friends Is the Highest Form of Art.’ So I mentioned that that’s suppose to say ‘beer,’ not ‘wine’–‘The Act of Drinking Beer with Friends Is the Highest Form of Art.’ It’s something [conceptual artist] Tom Marioni created back in 1970. When I said that, Rene’s eyes lit up. I could tell he was thrilled to be able to talk with someone who knew something about art.”

What Hussong didn’t know is that di Rosa once felt as out of place in wine country as Hussong did. Growing up with a decidedly un-WASP-y name amid the East Coast prep schools, di Rosa ended up gravitating to the artists and bohemians on the other side of the tracks. Years later he moved to the Left Bank in Paris “and felt very much at home in the heart of bohemia,” he says. “I sat at the outdoor cafes and drank wine with [Jean Paul] Sartre and Simone de Beauvoir.”

But the twists and turns of life led di Rosa to Napa Valley. “And I missed the life I had. So I had to seek out new friends.” And that’s how he came to meet artists and then collect art. As he grew older and wealthier, di Rosa decided to use his time, money, and energy to encourage and sponsor artists in the region.

Right after that di Rosa benefit, Hussong went to the hardware store and bought some handlebars, a pole, some wires and tape, and a large magnet, and made a thank-you gift for the host. Around it he wrapped a note stating that di Rosa could use the contraption to pick up nails without bending over. The note was written on an invitation to a gallery show that Hussong was in.

“Rene went to the gallery before the show even opened and asked to see my work specifically. And he bought it on the spot,” Hussong says. “And ever since then, he’s gone to shows and purchased my work. He’s made a huge difference in my life.”

And all that because of a few words written in crayon upon a wall. It’s good to know something about art–and about beer.

‘Fetish: Objects of Power and Desire’ will be on display by appointment through March 4 at the di Rosa Preserve, 5200 Carneros Hwy. in Napa. On Wednesday, Feb. 12, there is a free reception from 5-7pm, with artists speaking at 6pm. Call for reservations. 707.226.5991.