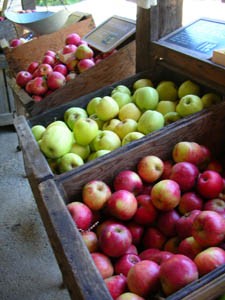 Bin There: Fall’s bounty beckons at the Apple Farm in Philo.

In search of the perfect apple dessert, no matter what

‘Et . . . voilà!” Eager eyes are on me as I flip the hot pan of apples, caramel and puff pastry I’ve been working on for the last three hours onto the plate. Nothing happens. No satisfying thud of tarte tatin gently easing out. This is not good. A sort of upside-down apple pie, tarte tatin is one of those “wow” desserts that egotistical cooks love to prepare. You painstakingly cook the thing and then dramatically flip the pan to either a standing ovation or complete disaster. I’m heading for the latter as I peek under the pan. A small crumble of crust has been dislodged, but nothing else. Sacré bleu!

Smiling, but feeling a humiliated flush growing in my cheeks, I flip the pan back over and gently slide a knife under the crust. Crap–it’s totally stuck. “No problem. One moment, folks!” I say, reaching for–here it is–the spatula! I dig underneath with a little more force. The whole thing crumbles into a mess of broken crust and burnt apples. Three hours wasted and, even sadder, three pounds of really expensive apples reduced to carbon. The smiles are sliding off the faces of my guests. Disaster!

“Et voilà!” I repeat with all the self-confidence I can muster at this point, scraping up and plopping into a bowl whatever can be salvaged. With a huge dollop of crème fraîche on top, I serve up the burnt, miserable mess anyway. Cooking can be such a brutal game.

This is not the first, second or even third apple dish I’ve made in the last week, though it was quite possibly the worst. I’m apple crazy right now, plowing though pounds and pounds of apples a day, making apple crisp, apple brown Betty, apple turnovers, apple chutney, apple sauce–I’m even contemplating some sort of apple cider.

But it’s the desserts that have me enraptured, all warm and gooey out of the oven, topped with caramel and cinnamon; they’re the essence of fall, of home, motherhood, of patriotism and of love in a 9-by-13-inch pan. That’s a lot to live up to, but apples are no sissies. Able to withstand the bad rap of being the fruit of Satan, as well as a long winter in the bottom of a barrel, they’re fighters. Cultivated since Roman times, they’ve become the world’s favorite fruit, with some 4.6 million tons produced in the United States each year.

With fall just beginning to nip, it’s hard not to get a little overenthusiastic about seeking out the perfect apple dessert. The top of my list is (please don’t laugh) making a notoriously difficult dessert out of Thomas Keller’s 2004 Bouchon cookbook. Keller is the chef of French Laundry and Per Se fame who has a legion of highly trained staff who actually know how to make things like tarte tatin. Perhaps I was a little overambitious. Apples can make you crazy.

As a novice cook, I usually tend to shy away from recipes involving two pages of instructions and the requirement that I make my own burning hot caramel sauce over the course of an hour. But I’ve come to Keller’s apple tart/pie recipe for a reason. His restaurant the French Laundry was owned years ago by Don and Sally Schmitt, who sold it to Keller in the mid 1980s when Yountville started getting a little too bustling for them. The couple, along with their kids, took up residence in Philo (population 874), located just north of Boonville in Mendocino County, and became apple farmers.

Of course, operating the Apple Farm is no retirement for the Schmitts. Part farm stand, part bed and breakfast and part rural cooking center, the Apple Farm has become a wildly popular outpost for weekend warriors looking for a bit of country life.

On a recent trip to Mendocino County, I bought several bags of Apple Farm apples, many of which are heirloom varieties all but unknown elsewhere. Keller himself, in his cookbook, Bouchon, swears by Apple Farm, using its apples almost exclusively. And with my own beautiful specimens from the farm, what else could I do with them but create a masterpiece? Or, um, a burnt mess.

I decide to call Sally Schmitt. I’m heartbroken over my tatin and, as she’s a cooking instructor, I’m hoping she can help.

On the third ring (hallelujah!), Sally answers the phone and I tell her my plight. “Oh, tarte tatin is really hard,” she says consolingly. “We don’t usually do it that often here. We make a clafouti that most people find a lot easier to make,” she tells me. Of course! A cla– what?

Clafouti is a French baked-apple pudding that’s typically served warm. Top it with a little vanilla ice cream, and it becomes trés magnifique. Back into the kitchen I go, chopping, dicing, blending–but this time it only takes me about 90 minutes, 40 minutes of which find me doing yoga in the living room. Breathe in (cinnamon, apples, eggs), breathe out (cinnamon, apples, eggs)–meditation takes on a whole new meaning. Fresh out of the oven, it’s a delight, quite possibly one of the best things I’ve ever made. (Click to the ).

But even with this small success and blissful yoga high, the tatin is still weighing on me, a gauntlet thrown down on my stove that I can’t walk away from. I’m ready to take on Thomas’ tarte again.

Thirty minutes pass. Apples peeled, crust chilled, I’m ready. I vow that this time I will (a) read the recipe thoroughly, without interruption or skipping any steps; (b) try to look at three other recipes to see what Keller has neglected to tell me (his recipes are notoriously difficult to follow); and (c) assuage my bruised ego and do this in privacy, should anything go awry.

Cook, caramelize, bake. Fast-forward another two hours: It is done! I’ve arrived at the moment of truth once again. Platter out, pan ready to flip, one . . . two . . . voilà!

This time it works. Sort of. Most of the apples plop out and fall unattractively to the side. This is no work of perfection, but nor is it a complete loss. I have accomplished a semi-not-too-bad tarte tatin. Hey, a little crème fraîche and no one will be the wiser.

Apple Clafouti from the Apple Farm

Preheat oven to 400 degrees. Sauté apples in 4 tablespoons butter until just warm. Add brandy and continue to sauté until apples are soft. Meanwhile, in a blender, combine eggs, milk, vanilla, 6 tablespoons melted butter, salt and sugar. When blended, gradually add in 2/3 cup flour so you don’t get lumps. Warm a 10-inch pie plate and butter bottom and sides. Place the cooked apples in the plate, then pour over batter. Sprinkle the top with a few tablespoons of cinnamon sugar and bake at 400 degrees for 25 to 30 minutes. Serve warm.

Do you know your Gravenstein from your Golden? Here’s a handy guide culled from the Apple Farm and elsewhere.

Golden Delicious A golden-colored apple with a sweet taste and wonderful apple smell. The Apple Farm has its own breed of Goldens called Philo Golds.

Gravenstein Originated in Germany or Denmark around 1790, this is an outstanding summer heirloom apple, renowned in the Sebastopol area before the great grape plantings. Thin-skinned, juicy and acidic, the Gravenstein lives up to its reputation as a perfect pie and sauce apple.

Jonathan First produced in New York state in the early 1800s, this apple is both tart and sweet, a great baking apple.

Lady Also known as Pomme d’Api or the Christmas Apple, it was grown by Louis XIII in his orchards and was the only apple his court would eat. Crisp white flesh, with an intense, almost citrus, flavor.

McIntosh A classic apple from the East Coast, very juicy and aromatic. Eat them quickly.

Pink Pearl Developed in Humboldt County in the mid-1940s, this apple is crisp, tart and aromatic with startlingly pink flesh. Pies and tarts are quite beautiful and slices hold their shape but cook up very tender. Roxbury Russet One of the first apples cultivated in the New World, this fruit is a fine cider apple with firm, coarse flesh.