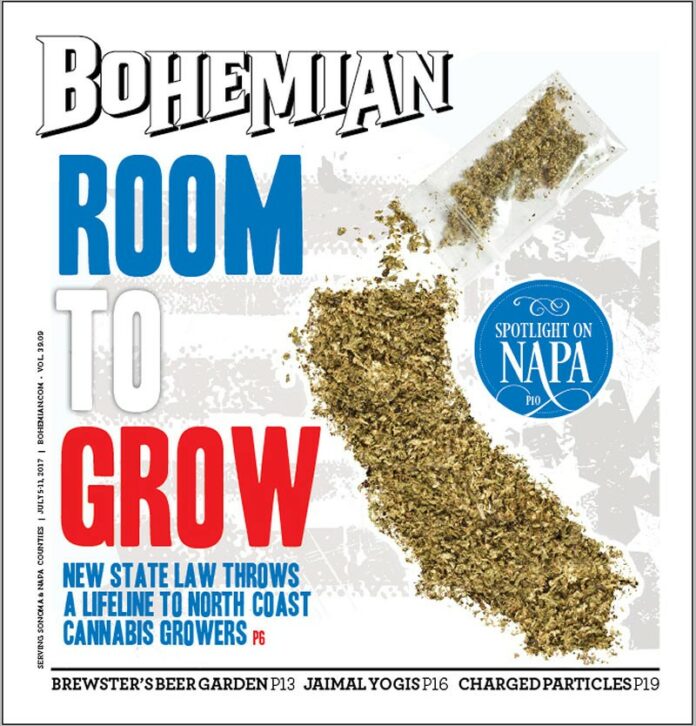 When it comes to the roll-out of a unified cannabis policy in California, a sativa singularity if you will, the devil is definitely in the details—not to mention the tongue-twisting parade of cannabis-bill acronyms that are hard to keep up with.

Now that the state has merged its medical and adult-use recreational regimes into one law, what’s next? Is everyone happy yet?

Enter MAUCRSA, the Medical and Adult-Use Cannabis Regulation and Safety Act, roughly pronounced “mao-curser.” What happens now that the state has acted speedily and decisively to bring its pot laws under one roof? The medical community, not to mention this newspaper, had declared that the state was “not ready” for legalization last year—but ready or not, the state now has one law and a whole bunch of details to sort out.

For one thing, a 500-page draft project environmental impact review (PEIR), issued by the California Department of Food and Agriculture (CDFA) in June, may be amended or revised to reflect changes in the new law that will impact the department, which has broad licensing and regulatory powers in the state’s cannabis economy.

As the cannabis legislation was getting hashed out in Sacramento this spring, with a push from McGuire’s rider bill, the CDFA issued its epic PEIR, which, as Rebecca Forée at the CDFA says, was written with the changing law in mind, even if it doesn’t explicitly address all the changes that emerged in the final product—including the creation of an “appellation” regime overseen by the CDFA.

“We were aware of the trailer bill as we were preparing the draft PEIR,” says Forée, communications manager at CalCannabis Cultivation Licensing, a branch of the CDFA charged with overseeing the licensing cannabis cultivators.

Forée says a final PEIR will be issued by year’s end and will incorporate new aspects of the
law contained in the McGuire rider. She says she doesn’t anticipate that the PEIR will be delayed or that the agency would need to reissue it. The draft PEIR was prepared by the Oakland-based Horizon Water and Environment.

“We are in the process of carefully reviewing the trailer bill language to determine what portions of the draft PEIR may need to be revisited or amended in the final PEIR,” says Forée.

The draft PEIR is now in a state-mandated 45-day comment period through the end of July.

One key provision in McGuire’s rider—which helped it gain the support of the California Growers Association, a statewide lobby—is the inclusion of a measure to create cannabis “appellations” to help protect growers in cannabis country.

In a statement about his rider released on June 12, McGuire highlights that 60 percent of all the cannabis grown in the country comes from four California counties: Sonoma, Marin, Mendocino and Humboldt.

With that fact in mind, McGuire—and fellow North Coast lawmaker Jim Wood—was adamant that North Coast growers needed to be protected in whatever reconciliation bill emerged from the medical-meets-recreational legislative process.

McGuire’s budget rider bill pushed for enhanced environmental regulations in the cannabis industry—he’s been a big anti-illegal-grow zealot—and for the creation of “an organic-standards program for cannabis.”

A much-needed North Coast “one-stop shop for tax and license collections” so would-be cultivators don’t have to drive five hours to Sacramento to apply for a license is on the way, and the McGuire rider also recognizes agricultural co-ops, “ensuring that small family cultivators can thrive in the new regulatory system.”

The MAUCRSA eases licensing requirements—cultivators can for example have an adult-use and medical license—and offers a new designation for cultivators that would allow for small-scale “boutique” grows, provided the local and county governments approve (local control is very much highlighted in the McGuire rider).

The adult-use law, which California voters approved via Proposition 64 last election day—had placed the appellation process in the purview of the Bureau of Medical Cannabis Regulation, which operates under the aegis of the state Department of Consumer Affairs, and gave the industry and regulators until 2018 to create an appellation regime for California cannabis.

The MAUCRSA shifts this responsibility to the CDFA and stretches the timeline to 2020. But there’s no mention of the CDFA’s new role as appellation-designator in the draft PEIR.

Forée says it will be in the final version.

The agency is also given authority over a new track-and-trace program that will keep the state eye on cannabis products, from seed to store.

The “appellation” issue is
of course a big deal in the California wine industry. Indeed, the California State Fair, held
July 14–30 this year in Sacramento, has a big wine competition—and the state fair is very serious about the rules when they pertain to where a grape is grown: “In order for a wine to qualify in any region, the label must designate the appellation of the grapes,” under federal regulations that established so-called American Viticultural Areas, and which are protected by booze-and-tobacco agents of the United States Department of the Treasury.

Will a future California State Fair have a cannabis contest with designated “American Cannabis Areas”?

That’s anyone’s guess, but with any federal descheduling of cannabis resting in the hands of Attorney General Jeff Sessions, who has demonstrated a certain unyielding contempt for cannabis, it’s up to the state of California to come up with the appellation regime for cannabis, in order to protect the local growers by regulating source-of-bud claims in marketing and licensing. In a statement, McGuire says his rider also allows for the co-location of medical and recreational cannabis under one roof “and clarifies that businesses cannot mislead consumers as to the origin of marijuana products on labeling, advertising, marketing or packaging.”

Forée describes the overarching purpose of the PEIR as a mechanism “to evaluate and disclose the potentially significant impacts of implementing the CDFA’s responsibilities under MAUCRSA, and to identify ways to minimize or avoid those impacts that are found to be significant.”

The CDFA, she adds, will set the parameters and assumptions within which cultivators can operate. But the state regulations leave room for localities to set their own eco-terms for would-be cultivators. “In some cases, due to the broad, statewide level of analysis in the PEIR, additional site-specific CEQA compliance may be required for individual cultivation sites or groups of sites (e.g., those within a particular county or city). We expect that such a site-specific CEQA evaluation would often be conducted by the local jurisdiction where the cultivation site(s) is located.” The CDFA’s role in those instances would be to review the site-specific CEQA as part of the application process.

The new law keeps intact a provision in the AUMA that bans large cultivators from the state until 2023. But in the meantime, licensing restrictions in the MCSRA were also written so that licensees can also hold medical and adult-use licenses. And small-time cannabis growers got a big victory in the new law, which removes a requirement that growers use an outside distributor to get their crop to market. The high times are just beginning.