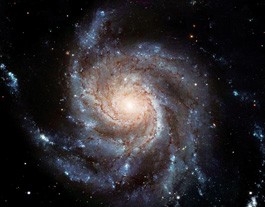 Sometime after Lynda Williams sings her 90-second version of the “Big Bang” and tantalizes audience members with her sexy rendition of “Carbon Is a Girl’s Best Friend,” the universe will end. Santa Rosa Junior College physics instructor by day and in-demand “physics chanteuse” by night, Williams kicks off an evening aptly titled “The End” on Jan. 30 at SRJC’s Petaluma campus, while the award-winning Dr. Chris Impey, author and astronomer from the University of Arizona, cheerfully tells everyone of the universe’s demise.

Impey’s forthcoming book, How It Ends, is due out in April. But there’s one thing Impey won’t be mentioning: the alleged Mayan apocalypse of Dec. 21, 2012, which prompted director Roland Emmerich’s unintentionally hilarious film 2012 and which all of modern science, though not the History Channel, has likewise rejected.

“All of this apocalyptic talk is a sign of light-headedness,” Impey says. “I had a slight debate with my editors about whether or not to include it in How It Ends and won the argument to not to. I don’t want to legitimize cranks. The entire discussion gets very tiresome from the perspective of real science. All of this talk about the Mayans is really a form of idiocy that gets the history, culture and astronomy all wrong.”

Why such a ghastly topic?

“I’m a cosmologist by trade,” he explains, “so I wanted to get out of my own little corner of the universe and look at how everything ends, not just the universe, but how human life ends, the human species itself, the destruction of the biosphere, the earth, the galaxy and then, of course, finally, the universe itself.”

Though the “big crunch” theory—which posits that the universe will collapse upon itself, essentially proposing the opposite of the big bang theory—has fallen from favor, more recent scientific consensus says when the end comes billions of years in the future, it’s gonna be a cold one.

“If you were looking into space through a telescope, you would gradually see the entire universe just getting dark as the stars and galaxies simply died from lack of energy,” Impey says. “You would see this enormous blackness that would take the place of everything we see in the night sky. The observable universe will get stripped away of things to look at.”

Of course, Impey adds, by that point our Milky Way galaxy would have been long ago destroyed by colliding with the neighboring Andromeda galaxy, and the slow, dark death of the universe would continue until simply everything fades to black.

“The prognosis is that the universe will be diffused, empty and cold,” he says. “That’s the best prognosis.”

There is another competing theory, one on the frontiers of science that has what Impey terms a certain “grotesque quality” that makes it a fascinating scenario. In this case, the universe doesn’t end in a cosmic chill, but continues to accelerate until the very fabric of space/time is torn apart.

Though it all sounds a bit dire—existence tearing itself apart like a newspaper—it’s also, well, hip. And that’s what keeps bringing Impey back for more.

“I love it,” he declares. “Astronomy is the coolest subject in science. It’s very accessible and one of the most exciting areas of research. I’m motivated by sharing that knowledge with my students and the public. We don’t really live in a science-literate culture. Most people have trouble distinguishing between science and pseudoscience or superstition. This shows us we can look at the universe rationally and logically.”

Williams, the physics chanteuse, not only croons about carbon but also sings the praises of this apocalyptic astronomer. While Williams lauds Impey for his numerous accolades, including his recent induction as a fellow to the American Academy for the Advancement of Science, she celebrates the more unconventional paths he takes. Williams praises the work that Impey has done in the arts, such as a project called “Astrobiology in the Sacred,” completed through a grant from the John Templeton Foundation.

According to Williams, not only has Impey taught at the Papal Observatory in Rome (and made friends with the Pope), but he also teaches astrophysics to the Dali Lama’s monks in India.

Joining Impey and Williams for “The End” could be just the beginning of an evening of mind-bending cosmic magic.