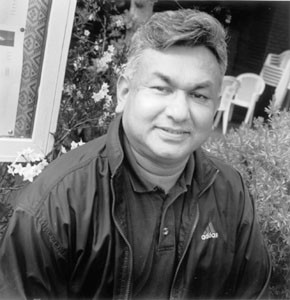 In the West, the New Year is traditionally celebrated by staying up very late and getting stinking drunk. But for the Nepalese New Year, which falls this year on Sunday, April 14, people “get up early in the morning and read a good book or clean up the house, or something like that,” according to Dikendra Maskey, recalling his youth. “People there believe that if you start off the first day by doing something good, then the rest of the year will be good for you as well.”

Perhaps the childhood lessons of New Year’s stuck with Maskey, because he seems to be doing good deeds all the time even though they sometimes appear to be at the expense of his own self-interest.

For instance, when Maskey was a small boy growing up in a village outside of Kathmandu, his father journeyed seven days to buy a radio for the household. Maskey was so curious about the big, singing box–and so worried about the poor, tiny people he imagined trapped inside–that he dismantled the new radio to set them free.

“I had to hide from my father for several days after that,” he says with a laugh.

It seems this combination of curiosity and compassion has guided Maskey’s life from the time he was a child. Now, as owner of Annapurna Restaurant in Santa Rosa, Maskey remains inquisitive about the ways of society and likes to share his concerns. So it’s not uncommon for him to talk to customers about the fate of women in Nepal.

“Over there, life is not fair toward women,” he says. “They still do most of the work, and they’re kept in the dark. It’s a hard life. I feel I need to tell people here about it, that they need to know. I believe that knowledge leads to a better world.”

But Maskey is not one to lecture. And he realizes that people come to his restaurant to have a good meal and a good time, and they might not be in the mood to discuss human rights. But then again, they might. If diners choose to begin a dialog, Maskey is more than willing to comply. And luckily, the restaurant is full of little conversation starters.

For example, if customers ask what the name “Annapurna” means, they could be opening the door to an extended discussion. Maskey will first explain that in Nepalese “anna” means grain and “purna” means food, and Annapurna is the goddess of plenty. It’s a fitting name for a restaurant. But Annapurna is also the name of a mountain range in Nepal, which was scaled by an American woman in 1978 during International Women’s Year.

“That was a big event in my life, to see that women can travel on their own and do things they want to do,” Maskey says.

Right around the same time, American hippies were filing into Kathmandu, where Maskey was attending boarding school. The hippies’ exotic dress and lifestyle and strange philosophies mesmerized the teenager. He was especially enamored by the idea that a woman could be a life partner and not just a servant. Little by little, he says, “I stopped going to classes and I started learning to play guitar.”

Eventually, Maskey went back to school to get a Ph.D. in social anthropology. He also found work as an instructor for the Peace Corps. It was his job to teach the new volunteers everything from personal safety to the language and customs of Nepal. And that’s where he met Julie Sabbag, an independent young volunteer from Palo Alto. The two eventually married and had a child. Three years later, they would have another daughter.

Maskey needed to return to his hometown to finish his dissertation. He and his wife planned to stay only three months; they ended up living there for five years.

When he went back to the village with his wife and baby daughter, his “eyes became wide open” to the plight of women, Maskey recalls. “They were the ones cutting the wood and working in agriculture and raising the children. They spent all their time working, but the men didn’t. It wasn’t right. But there was little [the women] could do, because they were kept in the dark. They didn’t even know how to read. So every day I would spend 5 to 10 hours talking to people in the village, trying to change things.”

At first, Maskey says, everyone was resistant. “The men would say, ‘Why are you doing this? Things are good the way they are.’ But I don’t believe things are good for men or for women when women are kept down.”

Eventually, Maskey was able to start teaching a literacy class that included health and general education topics to the village women. A picture of one of his first graduates can be found on a wall near the back of the restaurant. At the same time, Maskey served as headmaster for the area school, which enrolled about 800 students. “It was the only high school around, and some of the children had to walk two to three hours just to get there,” he says. A picture of three of these boys hangs next to the photograph of the woman. (The pictures are two more of the many conversation starters in the restaurant.)

Maskey’s educational programs started garnering more and more popular support. But his popularity and resulting power brought on the ire of politicians. “The government was very corrupt, and I had no desire to be involved,” he says. “But that didn’t make a difference. They still didn’t want me around. I just kept doing what I was doing.”

But when a political tide turned the populace against America, Maskey decided it was time to leave. “The only American for miles around was my wife,” he says, “and I was afraid someone stupid might hurt her or our children.”

So the family moved to California and opened Annapurna a year and half ago. Maskey believes that eating the foods of different cultures helps people relate to one another. “The more knowledge and communication there is between cultures, the better it is for us all,” he says.

Annapurna’s menu represents many foods unique to Kathmandu. In most of Nepal, Maskey says, the food is a simple, peasant’s diet. But the main city evolved a “high-class, complex cuisine for the royal families.” The fare was influenced by India from the south and China from the north, but, he adds, “there’s nothing else really like it.”

He points to two dishes on the menu as typical foods eaten in Nepal at this time of year. The chhuela is an appetizer of barbecued lamb cubes, marinated in mustard oil, green onions, ginger, garlic sauce, and Himalayan spices. And the aloo kauli is a vegetable entrée featuring cauliflower and potatoes cooked in mild spices.

“Summer is monsoon season in Nepal, so spring is the time when everyone goes out for picnics,” Maskey says. And since New Year’s Day is a national holiday, many people take advantage of it by picnicking with family and friends. Reading and cleaning are worthy New Year’s activities, Maskey says, “but it’s also a good thing to get together with people you care about and have a good meal.”