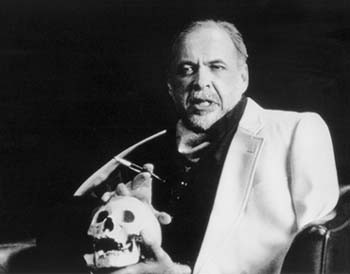 THE PANICKED MAN stumbles gracelessly down haunted city streets. Somewhere, an ominous voice cackles gleefully at his feeble attempts to escape his cruel fate. San Francisco indie film maker Tom Brown’s darkly comic take on being diagnosed HIV-positive might be unsettling to those who see nothing funny about AIDS. But bitter experience provided the raw material for the plight of Brown’s protagonist.

“He gets the news over the phone, and that’s the way I was notified,” Brown says with an wry chuckle. “Back then the doctor didn’t bring you in and prep you–he just called me at work and said, ‘I don’t know where you’ll be in three months or three years, but good luck!'”

The resulting short film–Don’t Run, Johnny–is one of the highlights of the upcoming 36th Ann Arbor Film Festival’s visit to the Lark Theatre in Larkspur. The 21 independent and experimental short films on display provide a welcome antidote to Godzilla and the other bloated summer blockbusters now besieging local theaters.

Getting a good short film noticed (or even screened) can be a Herculean task in these troubled times, and opportunities for film buffs to see well-crafted shorts are equally rare. But the touring Ann Arbor Film Festival does its level best to sate short-film hunger all over the country.

Since 1963, Ann Arbor has been providing an accessible alternative to commercial cinema for aspiring and accomplished filmmakers from North America and around the world. As the oldest festival of its kind, Ann Arbor has racked up an impressive list of past participants, including such cinematic notables as Brian DePalma, Andy Warhol, Gus Van Sant, and even George Lucas.

This year, the range of settings and characters is striking. We encounter the ever-changing west Texas sky in Hub City and follow an entrepreneurial small boy’s attempts to rent out his bicycle to neighborhood kids amid the rubble of war-torn Beirut in The Street. We also meet a delusional woman who believes she is the illegitimate daughter of John Wayne and Patsy Kline in Have You Seen Patsy Wayne?

Easily the most disturbing faces featured are people we know all too well. Another San Francisco filmmaker, Jay Rosenblatt, has assembled an intimate history of five of history’s most brutal dictators in his hair-raising Human Remains.

Rosenblatt’s 30-minute work illustrates the banality of evil by presenting historical footage of Hitler, Mao, Stalin, Franco, and Mussolini engaged in such ordinary human activities as sitting down to dinner, complete with historically based dialogue created by Rosenblatt. The film maintains a purposeful (and ominous) absolute silence about the dictators’ public atrocities.

The resulting tension is nearly unbearable, even for the filmmaker, who says that making the film was brutally tough. For three years, Rosenblatt sifted through archival footage and read mountains of historical material about these political mass murderers.

“The experience was very difficult,” Rosenblatt says. “After a while, I just couldn’t stand to look at their faces.”

It’s not all so grim, thank goodness. Young love, fascinating animation, and the sexual politics of romance-novel covers perk the festival up. Playful technique is also in focus here, as in Full Service Automation, in which Darya Farha explores some funky Xerox animation. And Brown’s Don’t Run, Johnny provides a peak comedic experience, with its Ed Wood-inspired atmosphere and gleefully morbid narrator.

But playful or grim, behind these films lies a tough economic reality of blood, sweat, and more sweat. The truth about indie films is that each one requires a deep personal investment from a patient creator. Imaginative financing doesn’t hurt, either. Brown–a self-taught filmmaker who dropped out of high school– finagles the money for his movies by selling spots in credit rolls.

“Our prices have gone up, but on Don’t Run, Johnny we were doing them for $25 a pop,” Brown says. “We’re the only people I know who actually sell crew positions. If they’re not taken, we sell ’em right off. So if anyone wants to be to be gaffer on the next film … “

The grim economics of the industry raise a perennial question: Will independent film survive the titanic stomp of big-budget blockbusters? That no longer seems in doubt–audiences seem more hungry than ever for thoughtful, provocative films. Still, the winners of the Ann Arbor Film Festival do prove that Hollywood is right about one thing: size does matter. But, as it turns out, small is better.