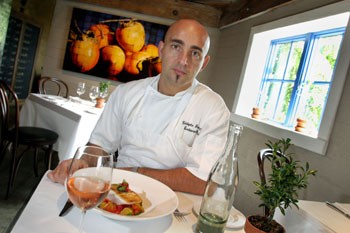 On Wings of Angèle: Chef Christophe Gerard whips up delicacies at Napa’s Angèle.

Down by the river, Napa gets an infusion of France

Beware the dreaded veal blanquette! Or so I had always thought. I once had to make the stuff in cooking school, and its ingredients of veal, cream, and egg yolks looked so bland on paper. The whole idea is not to brown the meat, but to gently seal it off in butter and then blanch it in white beef stock prior to draining the meat, and finally add a white sauce of sorts.

I followed the steps in the recipe, tasted the results, and was convinced of utter failure. “It tastes weird,” I confessed to our chef-instructor. “Oh, it’s fine,” she shrugged. “A veal blanquette is supposed to be delicate.” Rich, but delicate. To me, it resembled phlegm.

So imagine my shock when blanquette de veau was mentioned multiple times in both the printed and spoken word as one of the highlights of Angèle, a French bistro that’s been enlivening downtown Napa since December. Owner Bettina Rouas was a manager at the French Laundry; operator Claudia Rouas works at Niebaum-Coppola; their father, Claude Rouas, opened Auberge du Soleil. And chef Christophe Gerard was sous chef at Lespinasse in New York. The folks behind Angèle all have bitchin’ résumés.

When we made plans to give the place a go, I singled out the veal blanquette as the yardstick that would gauge the evening.

Angèle is not as aggressively French as La Poste in Sonoma or Bouchon in Yountville. It’s more perceptibly a Napa-France hybrid, the cuisine being more French and the setting more Napa. It’s in a converted boathouse in the Hatt Building, which also houses Celadon, the Napa General Store, the Napa River Inn, and serves as the venue for the Napa Valley Shakespeare Festival. We arrived just before The Tempest was set to begin, and cast members in full costume were pacing around on the sidewalk, joking around and fidgeting before their curtain calls.

“You’ve got table number three,” our server leaned in to tell us. “It’s the best table in the house.” The best tables at Angele are actually out of the house. The patio overlooks a rather scenic bend in the little Napa River, and on a late summer evening the twilight air is ideal for a drink and good company.

But from table three, you can see the river just fine. Angèle’s interior has lovely exposed timber rafters and a cellarlike coolness that’s welcome at the end of a balmy day. Huge canvasses of fruit and vegetable still lifes hang on the walls, and potted boxwood trees sit on the tables.

When the warm baguette arrived, it was plopped directly onto the paper-lined table, along with a small crock of butter. Of course this made a tremendous mess once we tore into the bread, but our server was very attentive about crumbing the table.

We started with a terrine de lapin (rabbit and prune terrine, $9.50), a delight for any lover of country-style pates. Its homey, course texture allowed the slight gamy taste of the rabbit to come through, while the accompanying deep purple onion marmalade provided a good sweet-tart counterpoint. An impressively thick slab of terrine graced the plate, which makes this a fine dish to share, but Mr. Bir du Jour was not fast enough, and I conquered a good three-fourths of it.

Salade de betteraves ($9) will fulfill your daily beet requirement, with its glistening base of diced red beets crowned with a plume of frisée dressed in a truffle vinaigrette. Next to the beets, the truffle essence was not very discernible, but the vinaigrette was nice and tart against the earthy beets, and crumbles of a mild blue cheese set the whole affair off.

After scanning the menu, I noticed with some disbelief that there was no blanquette de veau. Off the hook! It’s not much of a summer dish, anyway. Now I’d never find out if Angèle’s veal blanquette was indeed that good. So by default I got the steak bordelaise ($21.50), which is basically Angèle’s version of steak-frites. Bordelaise sauce typically involves shallots and poached bone marrow, the former present here via whole roasted shallots just to the side of the steak and the latter nowhere to be seen.

The steak was gigantic and juicy and fatty in just the right places. I had ordered it rare, and dug into a very red slab of good meat, though there were moments when the thin but flavorful sauce didn’t stretch far enough in its seasoning role and I found myself craving salt and pepper (there was none on the tables).

The frites looked normal enough, a huge pile of them, each about the thickness of a pinkie and revealing a grease-kissed golden crispness and a robust potato flavor.

Angèle has a fine wine list, though their aperitif offerings (a rainbow of pastis drinks, citron pressé, Orangina, Lillet, and the like) were particularly tempting on an August night. Even so, I couldn’t help but order a glass of the house red ($6) to go with the steak. It’s just so fun to say “I’ll have a glass of the house red,” something you don’t get an opportunity to request often outside family-style Italian restaurants.

Mr. Bir du Jour stuck with beer, perhaps not the best match for seared salmon with pea shoots and basil-tomato broth ($19.50). A fragile emerald-toned fried basil leaf crowned the salmon, which was cooked to a very lovely medium. The pea shoots had been sautéed. I’d always seen them served fresh in salads before, but here they were crisp and slimy like stir-fried mung bean sprouts, only much fresher. The basil-tomato broth was a vivid opaque orange and had a creamy texture, pleasing enough that it would have been nice to have a little more napped in the bowl. Its basil flavor was subdued.

We split a side order of tomates provençale ($3.75), two fat and juicy tomato halves crowned with bread crumbs and garlic, and heated just enough to bring the sweetness of the perfectly ripe tomato to life.

How tactless is it to say that our house-made vanilla ice cream ($7) tasted like Breyer’s vanilla ice cream? After the steak, it was all I had energy for. But it was like really good Breyer’s ice cream, dense and slightly grainy, with an assertive, pure vanilla-bean flavor. Mr. Bir du Jour noted that it was a little gluey, though. Our coffees each came with a tiny madeleine perched upon the coffee spoon, a sweet little touch.

From the window of table three, we spotted lights on the river; three small boats were paddling down under the curtain of nightfall. And our server was not only very gracious and capable, but he also looked a bit like George Clooney. That was nice. And I’d rather have ice cream than blanquette du veau anyway.