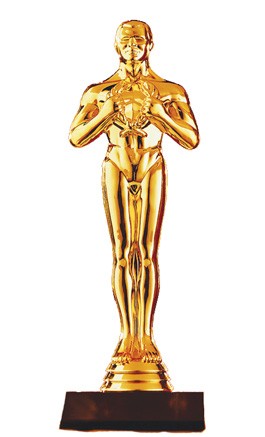 . . . possibly you, if you hit one of the North Bay's Oscar parties

Hollywood’s best will be crowned on March 7 at the 82nd annual Academy Awards. Oscar night is sure to be filled with glitz, glam and humor as hosts Alec Baldwin and Steve Martin announce film favorites and gold statue winners. The tradition of awarding good films dates back to May 11, 1927, when the first ceremony was held at the Biltmore Hotel. This year, celebrities will walk the red carpet to the Kodak Theater in Los Angeles to honor the most moving, most hilarious and most thrilling films of 2009.

Although the live audience will watch from the theater auditorium, it is tradition for many to gather with a group of friends to shout, “Oh, I loved that movie. It’s got to win!” This year’s lineup to the North Bay’s Academy Awards celebrations is diverse and exciting. A glass of wine, good food and good company will finish out the 2009 films and lift the bar for 2010.

For the 16th year, the California Film Institute hosts Oscar Night America at the Christopher B. Smith Film Center in San Rafael. The festivities will begin early for the pre-show and include a silent auction featuring a one-of-a-kind outing with Marin filmmakers and brothers Logan and Noah Miller, who shot their film Touching Home in West Marin. Drinks, hors d’oeuvres and dinner will be served as guests watch the show in the Rafael’s state-of-the-art theaters. The Academy of Motion Arts and Science officially sanctions this event, and guests will receive the official program of the 82nd award show as a souvenir. Smith Rafael Film Center, 1118 Fourth St, San Rafael. 3:30pm. $40&–$55; $750 for VIP guests, includes butler service. 415.526.5841

The sixth annual Party at the Lark will reward a guest for having the winning nominee ballot. The event features a silent auction, gifts for the most glamorous and most creative outfits, and food and wines. Lark Theater, 549 Magnolia Ave., Larkspur. 4pm. $40&–$75. 415.924.5111.