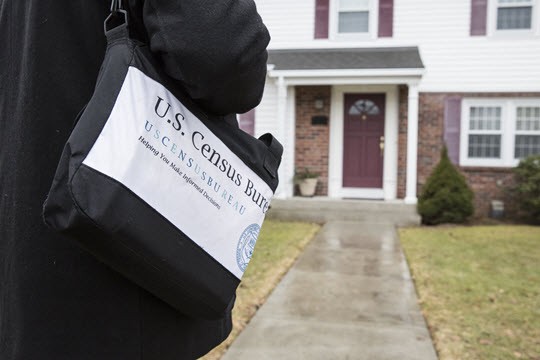 2020, the metaphorical dumpster fire that it is, also happens to be a Census year. As a result, the Census Bureau has dispatched thousands of employees around the country to begin the second half of its once-in-a-decade count.

Armed with a phone app and trained to follow local and federal Covid-19 health guidelines, the Census takers are now visiting households which have not filled in Census questionnaires online, by phone or by letter, according to Joshua Green, a Census Bureau spokesperson.

When they visit a home, Census takers are trained to ask questions from a safe distance, ultimately inputting the information into a phone app.

Census data is used to redraw Congressional districts and calculate the amount of funding local government agencies receive from numerous federal and state programs. The data, which is meant to record every single person in the country, is also used by scholars to study and understand societal changes.

If you would not like a Census taker to come to your house, you may respond online, by mail or by phone, Green says.

In addition to being interrupted earlier in the year by the pandemic response, the Census has taken on a new level of controversy this year.

This week Los Angeles and San Jose joined other cities in a lawsuit against the Trump administration in response to its decision to advance the Census data collection deadline from Oct. 31 to Sept. 30. Others have voiced concern that fears among vulnerable communities that their information will be sent on to law enforcement agencies, including ICE, could dampen response rates in some communities.

In an interview on Thursday, Green dismissed both concerns. The Census Bureau is barred under federal law from sharing Census data with law enforcement, Green said.

Despite all of the hurdles 2020 has presented, beginning with the pandemic and now continuing with widespread wildfires, it appears that California and three North Bay counties are on track to meet or surpass the 2010 self-reporting rates, according to the Census Bureau’s online self-reporting map.

On Friday, the Associated Press reported on a watchdog agency’s report that raises further concerns about the Bureau’s ability to complete an accurate, full count due to a shortage of Census takers. Bureau officials have rejected those concerns as well.

What about the ongoing wildfires and resulting evacuation orders in parts of the state?

“Those who are concerned about their community being undercounted because of the fires should get out the message that no matter where a family or individual happens to be sleeping at any given time, anyone can self-respond to the census,” Green said.

“We want people to respond based on where they were living before the fire displaced them, not where they are temporarily living,” Green said, when asked what people displaced by the fires should do.

More information about the Census is available at 2020census.gov.