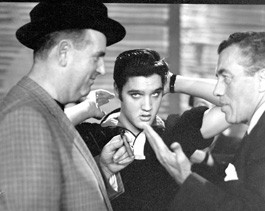 Elvis Presley is alive and well at the Petaluma Historical Museum

The Petaluma Historical Museum was in a bit of a rut. Devoted to southern Sonoma County’s history, it has been a longtime home to the same, unchanging exhibit of Victorian dresses and saddles, egg baskets and old photos, seemingly forever. But the Museum Association Board has recently undergone a major round of musical chairs, and under the watchful guidance of an almost entirely new board and new president Joe Noriel, the museum is rockin’ back to life. Literally. Because opening April 1, the Petaluma Historical Museum hosts a multisensory exhibit titled “Elvis! Grace and Grit.”

“Approaching the museum as president, I wanted to do things differently,” Noriel explains. “[The Petaluma Historical Museum] is kind of stereotyped, but we wanted to open this thing up beyond Petaluma and Sonoma County, because we’re also Americans. The top floor is dedicated to Petaluma, but on the bottom stage we’re looking at history in all the different forms, from the history of rock and roll to the Holocaust.”

And indeed, recent exhibits have been an examination of the Holocaust as seen through the life and efforts of Oskar Schindler (whose biography prompted the book and film Schindler’s List) and the recent “Journey of Faith: 150 Years of Black History.”

Running through June 30 is “Elvis! Grace and Grit,” which showcases over 30 never-before-exhibited candid and on-air photos of the King in honor of what would have been his 75th birthday, taken from the collection of the CBS Television Archives. The photos, from the late ’50s and early ’60s, chronicle the story of the young singer on his rise to rock ‘n’ roll fame.

The museum has coupled the traveling exhibition, which makes its inaugural stop in Petaluma, with music, film and locally collected memorabilia for a show that transcends mere exhibit and becomes an immersive historical experience. Visitors will find a 10-foot screen with Elvis videos on constant rotation and a playlist of Elvis classics to complement the collection of rare photographs.

“A lot of people can’t get out and travel, so instead of going to Graceland, we brought it here,” Noriel chuckles.

“When you start taking risks like this, the community really moves to embrace it. Membership has just blown up. I think we’re on to something here,” Noriel says, adding that museum membership has doubled since the museum has moved in a new direction.

And in fact, the community has moved to engage with the museum in other ways. Music has been said to bring people together, but the exhibit has seen a wave of community support.

“The heart of the exhibit is the photography of Elvis at his prime, but we thought, ‘Let’s open this thing up, put the word out for Elvis collectibles.’ People have been dropping off everything from Elvis shampoo to newspapers from when he died to old 45s to bobbleheads. We put the word out locally, but the funny thing is, before we put the word out, people were approaching us to offer things,” Noriel says. “There’s something about this guy, all these years later. He’s kind of wrapped up in the American psyche.”