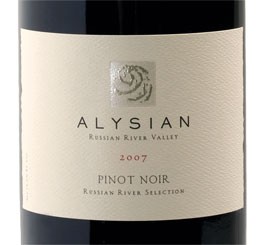 One hundred percent. That’s what we hope to get out of Pinot Noir. Yet a minor controversy periodically erupts when imbibers learn that, by law, their bottle may contain up to 25 percent of some interloping varietal. Some folks add Syrah; others, a dash of Petit Sirah to embolden the blend. And all the better, they say—isn’t this the intensely-hued product that the critics hand high marks? But when winemaker Gary Farrell was recently presented with the 100 percent Pinot Noir issue, he simply shrugged and asked, “What else is there?”

Farrell gained acclaim for Pinot back in the early 1980s while working for Davis Bynum and Rochioli, and barrel-by-barrel built up his eponymous brand, good for tens of thousands of cases per year. While that namesake winery churns on under different ownership (Swirl, April 30, 2008), Farrell refocused on artisan-sized Alysian, so that once again he could give each vine row and each barrel 100 percent of his attention.

On a recent Saturday morning just after harvest, it seems clear that’s the way he prefers it. Both a cellar rat and a winemaker, Farrell’s manning the forklift, racking Chardonnay from barrel to barrel, slowly and on gravity’s time. It’s only early October, but the battery of boutique-sized fermenters and neat rows of barrels are absolutely spotless, lending a clue as to how meticulously Farrell treats the entire process. Grapes are triple-sorted, totally destemmed, and the wine ushered in due time gently into the bottle. The result is like an undoctored snapshot of Russian River style.

The 2007 Pinot Noir, Floodgate Vineyard West Block, is a deeply colored Pinot all on its own, with a fresh core of deep, black cherry fruit. Perfumed with a hint of potpourri and smoky bacon, the more brooding 2007 Pinot Noir, Hallberg Vineyard, adds warm plum to the cherries, leaving with a wide, gentle grip of tannin. The 2007 Pinot Noir, Russian River Selection, brings all the lots together, giving a hint of the Hallberg, along with a core of fresh, focused dark cherry fruit unalloyed by cola or weedy notes.

Tasting is not available at Alysian’s interim facility, but wine may be found in Santa Rosa at Traverso’s Gourmet Foods & Liquors and on several local wine lists. Alysian Wines will also make a rare appearance Oct. 23 at “A Taste of Pinot,” a first-annual feature of Pinot on the River Weekend. Eleven winemakers will proffer a few of their top wines with fare prepared by the chefs of Charlie Palmer’s Dry Creek Kitchen in a walk-around venue, with a percentage of the proceeds going to benefit the Boys & Girls Clubs of Central Sonoma County. What percentage might that be? One hundred percent.