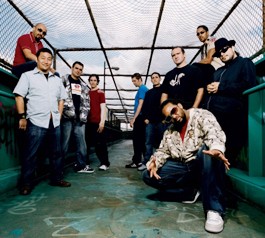 Ozomatli, the 10-member, L.A.-based, multi-ethnic music collective, create an appealing genre confusion; well over half of their material comes from traditional Latin styles sung in Spanish, with a slight remainder of funky conscious rap. Yet their biggest audience is the segment of the alt-rock crowd that views global tolerance as a punk ideal. In this particular rock aesthetic, it’s a cool, intriguing plus to have a Japanese band member who plays both Indian tabla and Caribbean percussion.

If there’s an argument to be made that genre mash-ups are essential to the rock tradition, Don’t Mess with the Dragon is it. Here, on the fifth disc, the band realizes its promise with an organic, integrated, upbeat pop sound in which hip-hop isn’t merely the lone spice in a Latin stew. Instead, the band creates a fully detailed yet easy-going brand of horn-filled West Coast funk that builds on reggaeton, classic R&B and hard rock. “City of Angels” sounds just like Kid Rock, while “Here We Go” is some sort of Chinese electro-reggae. “After Party” brings pure good vibes via Stax/Volt soul, while “Magnolia Soul” is Long Beach OG funk screaming for a Snoop Dogg cameo. “When I Close My Eyes” covers catchy emo-punk, while “Violeta” comes as an exquisite canciones-style ballad.

Ozomatli are known for progressive activism—such as supporting striking workers, the L.A. Peace and Justice Center, and music education programs—but they also create fun. Their recent music video of “Take Me Out to the Ball Game,” with its honking saxophone and Dodgers shout-outs, placed in the top three in ESPN’s contest celebrating the 100th anniversary of baseball’s greatest tune [the Dodgers still suck—ed.].