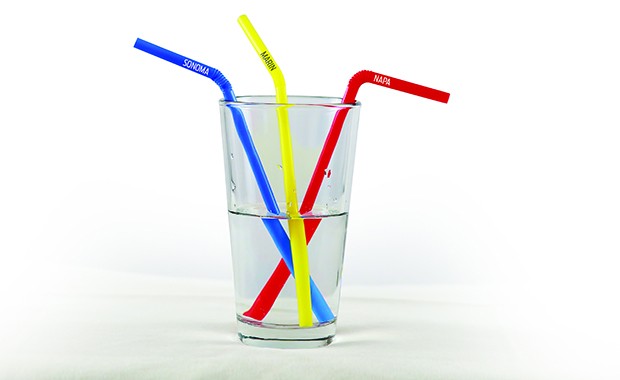 The big rains came, but the fish are still dying and the grapes aren't growing

Last weekend, rain fell in drenching, gushing sheets across Northern California. Stream levels bounced up, fish again had room to swim and farmers saw puddles form over their dusty properties. The Russian River, flowing at a trickle of 24 cubic feet per second last week in Mendocino County, had become a torrent of more than 4,000 by Sunday. But the relief did not undo the work of the driest year on state record.

“This did not put this drought to bed in the slightest,” says Sean White, general manager of the Russian River Flood Control District. Just over five inches fell in Ukiah, and Lake Mendocino’s volume jumped by about
20 percent. But it’s still half of its normal February capacity, White says, and there remains the real chance that the reservoir could be empty by September.

Just before last weekend’s deluge, Rhonda Smith, wine grape specialist with the University of California’s cooperative extension program, said that even another foot of rain this winter would not end the drought. She expects that the season will likely be a financial disaster for some farmers.

“It’s going to be bad,” Smith says. “These are the worst water conditions we’ve ever seen.”

Warm weather has sped up vine development, and Smith says an early bud break can be expected. Once the young leaves begin unfolding into the spring sun, farmers will need water at the ready to douse their vines should nighttime temperatures crash—a common means of guarding fruit trees against frost damage. Damaged vines may produce less fruit in the fall, if any at all.

But the water may not be there to protect them. Many growers draw their frost-protection water directly from the Russian River, where flows could drop again if more rain does not maintain the tributaries. For much of this winter already, the mouth of the river has been blocked entirely by a sandbar, which the torrents of most winters usually knock out. Salmon and steelhead have been largely unable to access the river to spawn.

The extreme conditions have raised the stakes both for grape growers, who will need summer irrigation water as well as their frost-protection spray, and conservationists trying to coax coho salmon numbers back to sustainable levels. Relations between the parties are likely to grow hot.
[page]

Eric Larson, a biologist with the state’s Department of Fish and Wildlife, says that when the Russian River Valley experiences subfreezing temperatures, hundreds of vineyard managers may begin pumping river water at the same time to mist over their vines, causing the river’s level to drop rapidly. Salmon in the system may become stranded, and their nests of fertilized eggs may be exposed to dry air and destroyed. “When the temperatures drop, the grape growers have their eyes on the river, and we have our eyes on them,” Larson says. “We’re all watching the same temperature forecast.”

The Russian is not the only river in which salmon and steelhead populations are struggling.

“Overall, the Central Coast coho are already looking at extremely reduced numbers, and this drought does not help,” says Stafford Lehr, chief of fisheries with the Department of Fish and Wildlife. South of the Golden Gate in particular, coho streams are liable to remain dry all winter, he says, eliminating an entire year class of fish. North of San Francisco, watersheds are subject to more rainfall and may be better off. The Eel River, for example, received a tremendous dumping of rainfall this weekend, opening up spawning habitat that has been inaccessible for months.

But in the Russian River, salmon and steelhead that hatched in the system last year have reportedly mostly vanished, either killed by high temperatures in shallow standing pools of water or eaten by predators. Even the weekend’s rains did not help fish born last year. To the south, coho salmon have been struggling to enter Lagunitas Creek for weeks. The stream, which runs off the northern slopes of Mount Tamalpais and enters Tomales Bay, once hosted thousands of spawning coho each year, but now sees annual returns of just several dozen fish. Larson says that last year’s return was poor due to low flows, and 2014’s spawn, he says, could be a failure.

He says that almost two hundred adult coho, ready and willing to spawn, are in the system, along with Chinook salmon and steelhead. Most of the tributaries where they historically lay and fertilize their eggs, however, have been too low for fish to enter. Last Thursday, the five-member Fish and Game Commission voted to close coastal rivers to sport fishing. Winter is usually prime time for steelhead fishing, but the fish are already under extreme stress, and the decision was made to give the steelhead the best chance possible at spawning.

“The fish have been stacked near Duncans Mills, and the bait fishermen and the sea lions were just hammering them,” says Dave Wiens, a fly fisherman from Novato who supports the emergency closure. “They just didn’t need that extra pressure of being caught.”

Protecting every last cubic foot of the Russian River’s water for fish could produce a sufficient return of spawners this winter, but the action could cost grape growers and winemakers a great deal of their year’s income. Most years, the average Pinot Noir vine produces enough fruit to make about three bottles of wine. But yields will likely be down this year, and some vines could be worth just a few glasses.

Loss of early growth to frost kills the most productive shoots of a vine. “That first budding is the most fruitful,” explains winemaker Scot Covington of Trione Vineyards in the Alexander Valley. “You can get growth afterward, but it won’t produce as much fruit.”

Some growers, it seems, are expecting disastrous crops. Karissa Kruse, president of the Sonoma County Winegrape Commission, says crop insurance is selling rapidly this winter. Meanwhile, other growers anticipating insufficient water for frost protection are planning to use wind machines, which can help mix warmer air above a vineyard with the freezing air at vine level, offsetting any threat to the plants. “I’ve been hearing that rentals for wind machines have quadrupled and sales have doubled,” Kruse says.

Even if growers make it through the frost season in good shape, they may face a long, hot summer without irrigation options. Water officials announced at a meeting last week in Cloverdale that even if California received a foot of rain in the next three months—an amount that forecasters say is unlikely—the state’s water supply would still only equal what it was in 1977, the second year of the worst drought in California’s history. Lake Mendocino could even dry up at the current rate.

Indeed, with more people now using the state’s water resources, the likelihood of unprecedented damage to the environment and the state’s wine industry is substantial. Randle Johnson, winemaker with the Hess Collection, says his Mount Veeder vineyards rarely experience frost and will survive without water this spring. This summer, though, his vines could suffer. “Our reservoir is at maybe 20 percent, and by July it might be empty,” Johnson says, adding that his hillside vineyards have no wells or groundwater supply.

Peter Baye, a resident of Annapolis and a member of the Friends of the Gualala River, says the weekend’s storm, though “a real gully-washer,” might not have been enough to quench the area’s thirst. “You can’t get much more than that in one weekend,” he says, “but this won’t much change the current hydrology.”

Many vertical feet of earth beneath the surface have slowly dried over the past several years of below-average rainfall, he says. Additionally, the Gualala watershed is under increasingly intensive use by the wine industry. (A new vineyard with a 90-acre-foot reservoir is going in now near Ohlson Ridge.) Tributaries that once contained water all year have reportedly been drying up in the summer, something that didn’t happen in the past.

“We’ve had old-timers saying this wasn’t an issue before,” Baye says. “This isn’t happening because of the drought. It’s the growing pressure on the groundwater that feeds into the streams.”

Baye says that once grape growers cease watering their vineyards, stream levels rise again. The correlation, he is certain, is no coincidence. “Magically, at the end of the irrigation season, even when it hasn’t rained yet, the rivers bounce back up,” he says.

The ridge of high atmospheric pressure over the Pacific Ocean that has been deflecting rain-making weather systems for 14 months has finally weakened, according to recent satellite images. This Sierra-size barrier of dense air, which pushed storm after storm north of California, was blamed as the cause of the state’s extended drought. Now meteorologists are speculating whether it may be gone for the season and whether winter as usual will proceed. But farmers and naturalists remain cautious.

“If these conditions continue through 2014, then people might really start asking, ‘Is this climate change?'” says Johnson.

Baye warns that the region is still thirsty even after the drenching Northern California received last weekend. “This was the third January in a row without rain,” he says. “Groundwater is down, wells have gone dry. Eight inches of rain won’t recharge the system.”