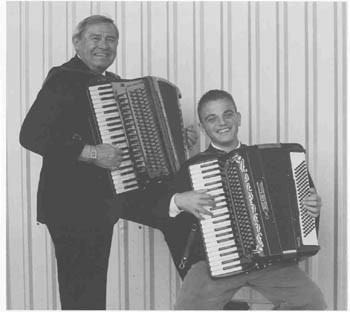 And the Accordionists Shall Inherit The Earth: Lou Jacklich (left), one of our most accomplished operatives, performs with his star student, Jeremy Jeans, at 11:05am on Saturday at the Cotati Accordion Festival.

The time has come to talk tough about the accordion revolution

Accordionists! Our day has come!

The time of insults about white belts and shoes, and the accursed mockery of our sacred anthem “Lady of Spain” are over. The bitter inmates incarcerated for the “crime” of using an accordion will now draw their revenge! We have suffered anti-accordionist discrimination. We have seen the social consequences of the rise of the electric guitar: bad attitude, poor grooming, and declines in trigonometry scores. [Catcalls, boos, cries of “Revenge!”] Soon, the world will tremble at the wrath of our instruments! Woe to those who stand in our way!

Thirteen years after our first meetings in a small Northern California town, we now have sufficient strength to invade. Our upcoming target is familiar to some of you from our early days of dispersion: a six-sided plaza in this small town strategically controlling Highway 101, just south of Santa Rosa.

At 0945 hours on the morning of Aug. 23, strike teams code-named “Universal,” “Hohner,” “Columbo and Sons,” “Parrot,” “Excelsior,” and “Bugari” will converge on each of the six sides of the main plaza of this hamlet. The natives call it Cotati–a name that will live in history.

Over both days of the weekend, we will rally support from San Francisco–an accordion-prone city, ready to fall into our hands without a fight, like a ripe Gravenstein apple. In Los Angeles and points south, untold millions favor the button box in ranchera music. We can count upon their support as well. Fellow accordionists! What is the so-called Nortena music but the polka, cleverly disguised to fly under the radar of antipolka legislation?

Weird Al Yankovich is back on the airwaves. Our commandos are working behind the scenes to ensure California will have a pro-accordionist governor shortly. Our special operative is from Austria, the birthplace of the accordion in the early 1840s. By Thanksgiving, all will play the accordion! [Applause.]

Now, I’d like to turn this meeting over to the information officer.

Yes, thank you, Major Bellows, for your stirring words. Portable, sturdy, and most of all loud, the accordion was built to travel. “The instrument of unsuccessful men, of poor immigrants and failures,” argued E. Annie Proulx, whose novel Accordion Dreams depicted the colonization of our country in terms of the journey of our sacred musical instrument. European immigrants to North America–Scandinavians, Italians, Central Europeans–all brought accordions to tame the frontier. Failures? Tell it to Lawrence Welk.

In Russia, the accordion is practically the national instrument. A quote from Maxim Gorky’s novel Mother: “He did all a young lad should do–bought himself an accordion, a shirt with a starched front, a loud-colored necktie, and a cane.” Presently, the “accordion gene” is found in most of the world’s peoples and popular music, making the task ahead of us all the easier.

At this point, I’d like to discuss some information gathered from the promoters of the so-called 13th annual Cotati Accordion Festival, the cover for our invasion. Participants at this event range from young (the O’Grady Family band) to elder (Lou Jacklich, who claims a near 70-year passion for the instrument). The Mexican R&B band Dr. Loco y Sus Tiberones del Norte wrap up the Sunday night show.

Odile Lavault, a talented San Francisco bal musette player with the Baguette Quartet, will be on-hand performing a series of Argentinian orquesta tipica traditional tangos with her new ensemble Marcelo Tango. Daniel Thonon, the Belgian-born musician famed for his group Ad Vielle Que Pourra, is playing in a duet with the singer Dominique Dupire, under the code name “Le Temps du Cerises.” The two specialize in French chansons–the cafe music of eastern Paris. Oh, have no fear, soldiers: In our struggle, the French are with us this time.

The musical jackassery of Those Darn Accordions! will entertain the troops with a repertoire of novelty songs and vintage polka. While you men know I’m not a fan of so-called rock and roll [good-natured hisses and boos] TDA!’s version of Devo’s “Uncontrollable Urge” has a warm spot in my heart.

I’d like to mention the capital work Jason Webley’s been doing for us in Seattle. Webley’s combination of commedia dell’arte and macabre cabaret absolutely slew a crowd at the Oakland performance space 21 Grand recently. Observers think of Tom Waits when they see Webley, probably because of his raspy voice and the reedy squeezebox. But on a song like “Time Is Not Your Friend,” Webley’s hypnotic powers not only make you embrace your mortality, they make you like it.

During an intelligence-gathering session, we also interrogated this festival’s honorary director Julio Morgani about his upcoming appearance on A-Days one and two. A well-known operative in Santa Cruz, Morgani’s elaborate costumes have made him a rallying figure for accordionist activities. He’s dressed as insects, aliens, and even a human Oscar for Academy Awards parties.

Let’s do the numbers. Morgani owns 33 accordions, has 50 outfits, knows 1,291 songs, has been playing for 52 years and has, he claims, “more shoes than Imelda Marcos, and mine are prettier.” Morgani’s unique method involves costuming the accordions themselves, using “stretch lycra bathing-suit material. It’s actually fairly easy. I can’t remember what accordions that are under these things. . . .”

The Great Morgani admits to the discomfiture of older members of the accordionist persuasion–those who favor formal attire and sober, starless and bible-black squeezeboxes. Yet Morgani’s turn for flamboyance may be the weapon we need to win the hearts and minds of the young. His musical repertoire includes the collected works of Fellini’s soundtrack composer Nino Rota–“My soul music”–though the Great Morgani can be caught performing anything from the theme song from Amélie to “Stairway to Heaven.” Morgani’s dress is as eclectic as his music.

Clifton Buck-Kauffman, a local operative in the festival and the owner of Prairie Sun Recording, asks us to remember that this weekend’s festival is a benefit. The previous nine years of paid admission have raised more than $150,000 for various school programs. This festival has not only put Cotati on the map, it’s also helped revive the accordion from dormancy. In addition, the festival’s founder, Jim Boggio, of the Swamp Dogs (his statue stands in the Plaza, a monument to an early fighter for our cause) will be memorialized in scholarships for young accordionists.

Those young students will never know of our days of struggle. No Internet existed to connect us; there was no Boaz or Smythe in Oakland to spread the word. A person like myself could be stopped and questioned because I was–I am–an accordionist. I will say it again: I am an accordionist, and I have no guilt. [Applause.]

We can, I say with confidence, count on community support for our heroic undertaking and expect a crowd of some 3,000 a day. Ground support on this weekend includes a polka tent with music by Steve Balich equipped with a springboard floor, a Louisiana-music dance by Al Rapone’s Zydeco Express at the Cotati Community Center, and a BYOA jam tent.

At 3pm daily is the mass performance of “Lady of Spain.” No words can describe the gallant sound of some 50 accordions united. We band of botherers! All of us sounding as one instrument–one hellish, monstrous, and out-of-tune instrument. Morgani councils playing “Skater’s Waltz” in the same chords, as a jazzy counterpoint. The resulting vibrations have been known to rattle windows as far away as Sausalito.

There you have it, men. Carry low-profile canvas chairs. It’ll be hot, so dress accordingly. Or, if you’ll permit me a small joke, accordiongly. Our arpeggios will change the world! We stand like the Spartans, only with banyans, melodicas, and chromatics instead of spears and shields. We cannot fail. We will not fail.