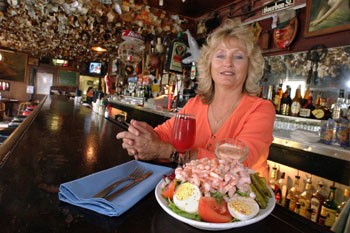 Shoe-’nuff: Cheryl Jensen, manager and bartender at the Washoe House. Her parents have owned the business for 30 years.

Before wine country, there was Washoe House

Roadhouse: A tavern, inn, or, especially, a nightclub at the side of a road in the country.

That’s what the ol’ Webster’s New World Dictionary had to say about roadhouses. I though I would be safe and make sure I knew exactly what a roadhouse was before I went blabbing on about how you don’t see many roadhouses around anymore.

So, yeah, you don’t see too many roadhouses around anymore. Dive bars and shady spots are not too tough to locate, but places of those persuasions located out in the country are a dying breed. Maybe Red’s Recovery Room is a roadhouse, though it’s more of a bar and less of a tavern.

If you want the real thing, hoof out to Washoe House, whose wonderfully informative paper placemats claim it to be “the oldest roadhouse in the state.” This could possibly be disputed, but by whom? The place has been around since 1859, so by now it’s earned the right not to be argued with.

It’s in a lovely spot, right off of Stony Point Road, where Rohnert Park sprawl melts away and the hills are golden and rolling and left alone to look scenic. And there are no grapevines in sight. It’s like the time-warp zone of Sonoma County.

Washoe House used to get a lot of action. It’s easy to walk into the bar and imagine ruffians with wild, unkempt facial hair brawling over the ladies upstairs–and that’s where the real action came in. Washoe House was a brothel, perhaps a bit like the one Cathy ran in East of Eden. I imagine not many whorehouses look like Washoe House anymore, either, but the whores are long gone anyway. You can get grub and libations there, but no libidinous action.

Washoe House is like the un-wine country. What you get there is California food and not California cuisine. Some movie location scout apparently was drawn to Washoe House’s lived-in charm, because it appears in that Clint Eastwood movie True Crime. The parking lot itself is the first good sign. It’s spacious, so you pull in and get the sensation that they’ve been waiting just for you.

There are a few different rooms to dine in (with country wallpaper or without), but the best one is the barroom. On the wall there’s one of those late 19th-century paintings of a smooth, fleshy nude Venus lounging on some clouds, attended by cherubs (one of whom seems to be giving Venus mouth-to-mouth resuscitation)–very 1860s whorehouse. Immediately next to it hangs a framed cartoon of a man on the crapper that reads “The only guy in here who knows what he’s doing.”

Washoe House’s ceiling, undoubtedly its most famous feature, is invisible–meaning the actual ceiling itself is obscured by decades’ worth of dollar bills, business cards, photographs, and do-dads by the score. There’s probably at least a thousand bucks stuck up there, though it’s mostly dust-covered and yellowed and brittle now. I can’t look at the ceiling too long without losing my appetite. But it’s almost as if the dollar bills are ghost money leeching down from upstairs, where so many amorous transactions transpired. The ceiling is tiled with whores’ money!

There’s a good mix of clientele. A lot of them are older, just nice, normal folks who want a plate of honest grub. During an early dinner, I spotted a lot of really great crusty old guys at the bar, rolling dice with the bartender. A lot of places have all kinds of antiques and junk tacked up behind their bars, but Washoe House’s old junk has a patina of authenticity about it. Don’t bother bringing reading material; just look at the décor.

They just recently changed over the jukebox to digital. It used to play vinyl singles, a Washoe-lovin’ friend of mine informed me. I saw the waitress go over and punch in a few Eagles songs. (I think there’s a law that every jukebox in America must contain selections by the Eagles and Creedence Clearwater Revival.)

I’m guessing people go here for the atmosphere primarily, though the food is in keeping with the spirit of the place. The menu is posted up on the wall, written on a chalkboard and a dry-erase board. And it’s fairly easy to comprehend, because it’s filled with the kind of stuff we’re all familiar with: New York strip steak, battered jumbo prawns, broiled salmon and halibut, burgers, club sandwiches, prime rib.

Entrées come with bread and a green salad or soup. The salads consist of kidney beans and iceberg lettuce, with an equal volume of dressing to lettuce, so if you are one of those dressing fiends, have at it. The blue cheese in particular is fine and rich, very mayonnaisey.

I think it’s great that with most entrées you not only get bread, but home-baked biscuits too. It’s like a two-course carb-tasting menu. The bread is perfectly serviceable, though I’d advise holding out for the fluffy, crumbly-as-heck warm biscuits (drizzled, perhaps, with some honey to make for a sticky mess).

Mr. Bir du Jour got the fish and chips ($8.75), and he liked it OK, though I had reservations about the breading on the fish, which shared a few too many qualities with Shake ‘N Bake. The chips were broad and flat and much more chiplike than most “chips.” Instead of the typical cole slaw that comes with a lot of fish and chip dinners, Washoe House provides a big helping of mushy canned green beans. So unexpected!

The chicken in a basket ($8.75) is, more technically, half a chicken in a basket. Breast, wing, thigh, drumstick–that’s a lot of chicken. It all sits on top of a pile of fries that are identical to the chips, but since they don’t come with fish, they are, in this case, fries. I’ve had better fried chicken before (it’s pretty much just that–chicken, fried), but it was nice to see that Washoe House does not use some weird frozen, prebreaded chicken parts.

The broiled halibut ($14.75) reminded me of the food I ate in the dining rooms of old hotels when I was young. The halibut, sprinkled with paprika and broiled to a pasty dryness, tasted very good when dunked in either the tartar sauce or some of the surplus dressing from the green salad. The familiar green beans came alongside, as did a baked potato with sour cream in a tiny paper cup.

My favorite dinner was the plain old hamburger ($8.50), a monster of a patty cooked to a perfect, juicy medium-rare. There’s no special sauce, no fancy topping. Just burger. I wound up getting ketchup and mustard all over my Washoe House place mat, which made me sad, even though I’d already stashed one away.

A Washoe House favorite is the buffalo burger, which was reviewed secondhand by my Washoe-lovin’ friend: “It was good. I love the Washoe House, the history, the whoring. I ordered a whiskey and Coke and specified ‘Southern whiskey, from the South of America.’ Waitress: ‘From South America?'” Speaking of waitresses, I had the same waitress at each visit, and she was wonderful.

It would be wise to avoid the consumption of too many potatoes and bread to save room for pie. Either that, or make a special trip just for the pie. It’s homemade, and not in the sense that they just dumped a ton of filling into a premade crust. I wanted to get the blackberry pie à la mode ($3.75, in that case), but I was too full and chose to order it naked instead ($3). The ample filling glistened like garnets under a sweet Dutch-crumb topping that offset the pleasant tartness of the blackberries. An ideal pie experience.

An ideal roadhouse experience, in fact. This is one of the few places where you are equally well-off getting drunk as you are chowing down with the entire family. Washoe House feels like home. As the menu says, “I await you. I am Washoe House.”