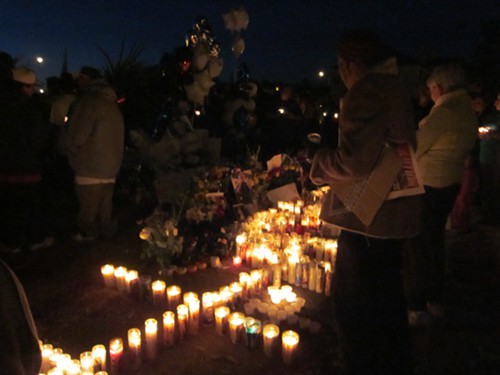 A Vigil for Andy Lopez

Andy Lopez was 13 years old. He played in the school band. He was popular and well loved at his school, evident in the hundreds of students and teachers that have turned out for daily protests and vigils since the killing happened on Tuesday afternoon at 3:15pm. His death has gained international attention, stirring up not only intense outrage, but a renewed call for a civilian review board, or a statewide watchdog, or some sort of independent contractor to oversee the investigation. As it stands, the Santa Rosa Police Department will conduct the investigation of the Sonoma County Sheriff’s Department. Since 2000 in Sonoma County, not once has an officer of the law been charged with wrongdoing when a suspect has ended up dead on the ground. Will this case be any different?

A vigil on Thursday night, at the spot where Andy came to a violent end, drew hundreds. I attended with my nearly nine-month-old daughter wrapped close to me in her baby carrier. I kissed her head often and gave thanks for her warmth against me. We set zinnias and roses cut from our garden on the memorial and looked at photos of the handsome, smiling boy from Cook Middle School. People lit candles and prayed, others simply stared at the altar for hours, trying to make sense of the senseless. Aztec dancers performed on the site and conducted a prayer ritual in Spanish for the safe flight of Andy’s soul.

A contingent of middle-school kids—friends and peers of Andy—marched for at least a mile, from Roseland to Moorland, chanting “Justice for Andy” and “Fuck the Police.” They arrived at the field, at the memorial, during the prayer, led by a man who said, “Somos todos Andy Lopez” as the smell of ritual incense burned in the air and a guitar strummed softly in the background. I stood amongst them, thinking about how incredibly young they all looked, still children, just like Andy. They held signs and flowers and balloons and stayed long into the cold night, in that field, wondering how this happened, and wondering when it would happen again.