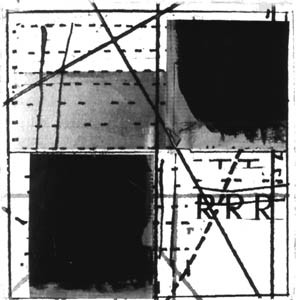 Printmakers practice alchemy at the A Street Gallery

Printmakers are an odd lot. Like alchemists with a sharp gift for drawing, printmakers tend to bob absorbedly in obsessive little worlds of technique and refinement, favoring such multisyllabic inbred passwords as monotype, intaglio, collograph, and lithography. Acids and other murky poisons make their work, papers must be literally rolled upon, and the end result is indeed sometimes pure gold. For the second year in a row, the most wonderful A Street Gallery in Santa Rosa showcases their exertions.

Showing through Nov. 2, the A Street’s annual printmaking exhibition, this year titled “Printed Matter,” should be declared an extra-credit enticement to every budding art student in the North Bay. While there, young budder, please consider the tale of Frank Ryan and take note.

Ryan is 23, he’s just finished a year studying in Italy, he’s been privately sponsored for this show–a patron paying the framing costs to ensure he could exhibit–he is collected by most of Sonoma State University’s canny art faculty, and he’s only just beginning to roll the boil of his alchemy. Frank Ryan, young budder, is aiming to be a star. Frank Ryan, O collector, is still cheap.

Trained as a painter, Ryan’s work in monotype printmaking is as maquette, the preparatory studies for finished work. Using a severe paucity of movement, relying almost solely on the reliable glory of light and a viewer’s brain synapses to put images together, his quick, deft strokes paint an everything from a nothing.

Viewed from across the A Street’s gallery floor, Ryan’s work looks photographic, intense, real. Viewed up-close, a truck’s headlights that had glared with such cinematic film noir intensity (Unloading) from way back on that wall now reveal themselves to be two brushes of white paint on this wall.

Profoundly influenced by English painters Francis Bacon and Lucian Freud, Ryan’s work also centers on human narrative, be it the discovery of a stiff bird in the backyard (Dead Jay) or a red-hued restaurant fight (The Argument). But the representational figures almost cease to matter, as Ryan’s surfaces are infinitely fascinating from any vantage.

Adjacent to Ryan’s work is the deep private world of master printmaker Jennifer Sturgill. Associated with San Francisco’s prestigious Aurobora Press as a master artist since 1994, Sturgill makes wood-block prints that are layered with paint, more prints, water stains, and even the shortened pieces of handmade paper that they’re made upon.

Seemingly placed in some mythical world (indeed, she has recently retitled some pieces in this exhibit that previously referred to such standard myths as Narcissus), prints like Sky have a stylized Grecian look, as though her figures are bending to pick up Diana’s golden balls in some long ago god sport. Mesmerizing in their proficiency and beauty, Sturgill’s works above all have a beckoning mystery, for her revelations–while certainly personal–are just within the thinking viewer’s grasp.

Why shouldn’t the image of a paunchy, nude, bald man reaching an oversized hand to fondle a leafless shrub be titled Unknown Beauty? Above the shrub, like a half-remembered dream, hangs the image of a younger man, dressed in a button-down shirt. Lover or self or son–it doesn’t matter who the younger man is, only that Sturgill’s work contains more than its share of unknown and unknowable beauty.

William Smith and Deborah Salomon fill out the rest of the show, Smith exhibiting his dark, witty, cartoony prints of stubble-faced men battling various demons. Smith–a printmaking and drawing instructor at both Santa Rosa Junior College and SSU–draws just like ringin’ a bell and has also put his time in at Aurobora Press.

There’s a vaudevillian air to the characters hiding in the corners of his work that whiffs of Poe Dismuke’s drawings, and his male noses acknowledge colleague Kurt Kemp’s proclivity for the phallus. Overall, his pieces share a naughty man-boy quality suitable for hanging in Maxim magazine’s hallways; were but all the editors there Harvard graduates over 30.

Salomon’s work exemplifies the technical obsessions of the printmaking profession, though her artist’s statement claims interest in the unpredictable rather than carefully staged result. Using collage to build her tiny pieces, none more than 12 inches high, Salomon in her work focuses on the graphics of letters and numbers and on subtle colorations.

Unfortunately, in an exhibit this lush, one dominated so hugely by Ryan and Sturgill, her meditative work gets largely lost.