.20 Shows I Saw In 2012 But Never Reviewed Here, Now Reviewed In Three Sentences Each 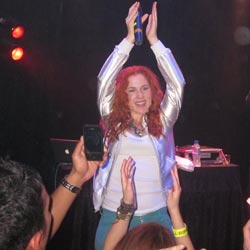 Katy B at the Rickshaw Stop: “Katy On A Mission” is a hell of song. The rest, not so much, but Katy B bounced around the stage, was effervescent, etc. This show is memorable mostly for a) going to Roosevelt Tamale Parlor on 24th for the first time ever and b) hearing M83’s “Midnight City” played very loudly on club speakers. 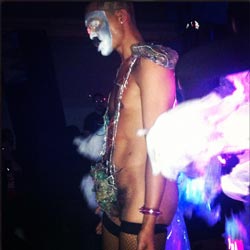 Demdike Stare and Andy Stott at Public Works: A girl yelled “You’re the worst DJs in the world! I hate you!” repeatedly at Demdike Stare for 15 whole minutes. Andy Stott went on at 2:40am. I got a parking ticket, but it was worth it. 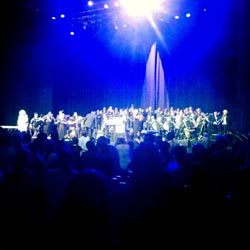 Aretha Franklin at the Nokia Theater: The last time Aretha played the Bay Area was 1978, so I stopped holding my breath and took a plane to Los Angeles for this, a great, great show that opened with the barn-burning “Your Love Keeps Lifting Me Higher” and ended, of course, with “Respect.” The whole time, I thought about how Aretha was born in this run-down house in Memphis, then had a baby at age 14, then recorded her first record, and then had a baby again at age 15, which according to conventional wisdom should have derailed her whole life but LOOK AT HER NOW, an undisputed legend. Smokey Robinson was there, and walked slowly right by me, and I was speechless. 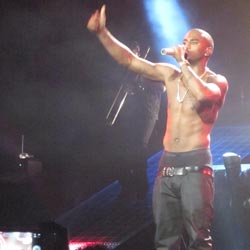 Trey Songz at the Oakland Arena: When you are headlining an arena show, it’s not a good idea to interrupt your set five songs in to show a commercial, for god’s sake. It’s also not a good idea to perform only a snippet of the great “Neighbors Know My Name.” There was a fight on the street below the BART platform afterward, and I went to Home of Chicken and Waffles at midnight to cheer myself up. 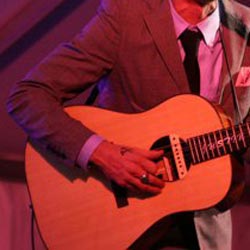 Justin Townes Earle at the Wells Fargo Center: A tall, rail-thin songwriter with a tilted hat who affectedly jerks and lurches like he has bugs in his clothes and mumble-sings like a less-drunk Conor Oberst. Plucks and pops the strings hard, especially while playing Lightnin’ Hopkins covers. Ended his set with a very touching song about his mom, and in the space between the song’s last chord and the rousing applause, you could hear audible gasps all around you. 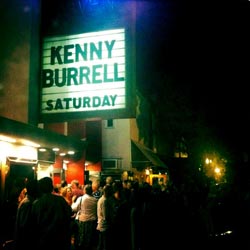 Kenny Burrell at the Raven Theater, Healdsburg Jazz Festival: Before the show, a volunteer on stage was announcing the sponsors, upcoming events, etc., as people at jazz festivals do, when all of a sudden a jerk in the crowd yelled out “I want to hear music!” Jessica Felix, festival director, decided not to throw the guy out and instead got on the microphone and kindly offered: “If that man would like his money back—if anyone would like their money back—we’ll give it to him.” Then Kenny Burrell came out and made a point of thanking all the sponsors, and dedicating the Barbra Streisand staple “People” to those who that poor woman on stage was trying to thank, and I hope the dude felt sufficiently shamed, and Kenny Burrell was damn good. 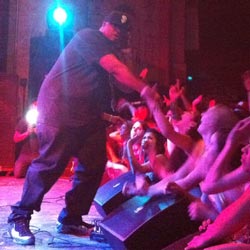 E-40 at the Phoenix Theater: E-40 has been doing the same exact setlist for six years, plus whatever current hit he’s pushing; this ain’t great if you’re hoping to hear “Lightweight Jammin’.” During the last song, his manager, standing on stage, got paid in cash, and he counted it right there in front of the DJ riser. V-Nasty opened and did just four songs. 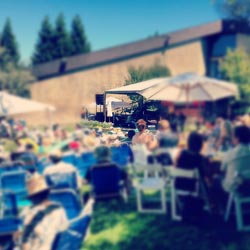 Vijay Iyer at Rodney Strong Vineyards, Healdsburg Jazz Festival: A guy in a lounge chair in front of me said “This is great—I’m from San Francisco and I’m retired, and I have all these Hawaiian shirts I can never wear there,” and coincidentally, one song later, Vijay said, “Needless to say I’m a little overdressed.” He played “Optimism,” “Star of the Story,” “Wildflower,” and “Abundance,” and got a well-deserved standing ovation in the winery’s semicircular outdoor micro-amphitheater. It was deathly hot, and so we went swimming north of town at this killer spot in the Russian River afterward, and you can’t ask for a better summertime day, really. 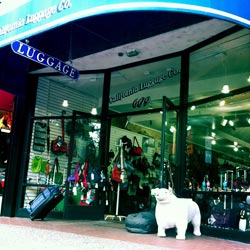 Kid on Fourth Street Playing Against Me’s “Cavalier Eternal”: For ten seconds, I walked past him and sang along loudly, and we looked at each other while singing this kickass song with that knowing look of “Holy shit we both know this song, isn’t it great,” and then I continued on down the street. Santa Rosa’s street-music ordinance has been a great thing ever since the terrible trumpet-playing stoner guy in front of Barnes & Noble left, thank god. I even saw a man playing El Chicano’s “Sabor a Mi” on the hammered dulcimer in front of California Luggage Co., which is a beautiful, beautiful melody to hear unexpectedly in the middle of your workday. 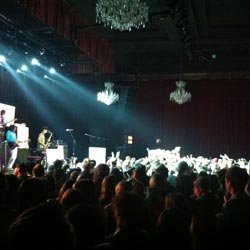 Of Montreal at the Fillmore: As Sade once sang, it’s never as good as the first time, but tracks like “The Past Is a Grotesque Animal” and the whole fucking opening suite of Skeletal Lamping will never stop blowing my mind. Kevin Barnes, who on good nights is among the most dynamic lead singers in the world, seemed more depressed than usual. I find it hard to ever be depressed inside the Fillmore. 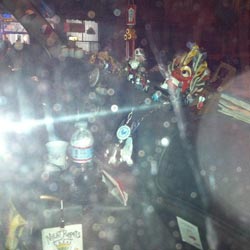 fIREHOSE at Slim’s: My car broke down near Kezar before the show so I actually took a cab to Slim’s, and walked in right at the first song, “Brave Captain,” which always reminds me of Natas Kaupas. Watt, fROMOHIO and Hurley are underrated, in my opinion, and I forgave them the occasional sloppiness because their first two albums are such masterworks. Also, if you aren’t standing up front in the first five rows at Slim’s, you basically aren’t experiencing the show fully; this problem with the layout of the building is sadly irreparable. 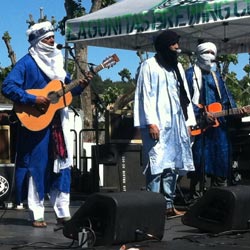 Tinariwen at the Sonoma County Fairgrounds, Higher Vision Festival: Everyone who grumbled about the Health & Harmony Festival getting too big and dropping the “Health” in their name can take comfort that the Higher Vision Festival feels like what the Harmony Festival used to feel like. Unrelated: A guy with “NUG LIFE” tattooed on his shoulder standing near a six-foot high pot plant in front of the Peace in Medicine booth, ha ha. Tinariwen are like these chill-ass meditative dudes who are tuned to the same frequency of the desert, and I felt reverent watching them. 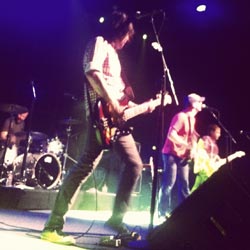 Promise Ring at the Fillmore: I went into the show thinking I only knew three Promise Ring songs, but left realizing I know about 10. They played “Tell Everyone We’re Dead” but not “Best Looking Boys,” which is unfathomable to me. The we’re-in-our-30s-now reunion-show crowd was incredibly subdued, and the Fillmore bar, usually packed, was completely empty most of the show. 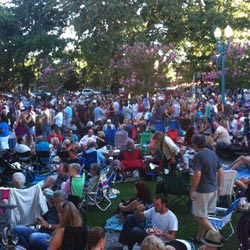 Chuck Prophet in Healdsburg Plaza: “If you buy 1,000 CDs,” he joked, “you can sleep with any member of the band!” (He also called the city “Beverly Healdsburg,” ha ha.) Total cheese-and-wine scene, and too crowded, and we were hungry so we left early and wound up at a place with $10 tacos, what the fuck. 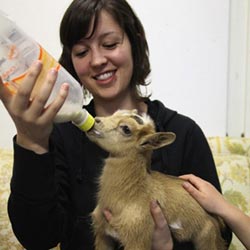 Trebuchet at the Arlene Francis Center: They closed with “The Book of Love,” by the Magnetic Fields. A week later, my best friend asked if I would sing it at his wedding. I agreed, and sang it in front of all those well-dressed relatives at Tilden Park, and it turned out well, but Trebuchet’s version is better. 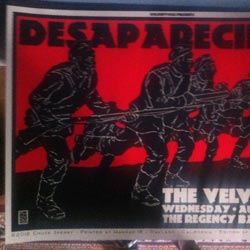 Desaparecidos at the Regency Ballroom: Basically just checking things off the list. The band played fine, and ended with “Spanish Bombs,” and Read Music Speak Spanish has always been one of my favorites. I’m getting tired of reunion shows, though. 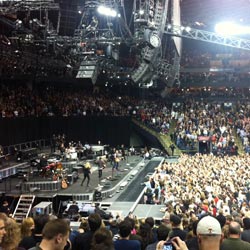 Bruce Springsteen at the Oakland Arena: Hey, Goldenvoice—don’t tell people it’s a paperless event, then send them tickets anyway, then send them three emails saying it was a mistake and not to bring the tickets, and in fact destroy them, and then on the night of the show ask people for their tickets at the door, and be surprised when people explain why they don’t have tickets with them, and not have anyone stationed anywhere outside the arena who knows how to help, and not send people to the correct lines, and not have a credit card reader that works, and have to delay the show’s starting time by almost an hour because there are hundreds of people in a giant, irritated swarm outside unable to get inside. Okay? “Kitty’s Back” and “Something in the Night” made everything well again, of course. 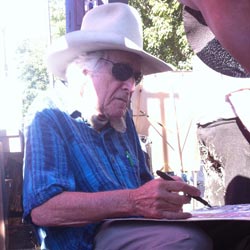 Ramblin’ Jack Elliott at ‘This Train,’ Railroad Square: The stories this man tells, and the stories that other people tell about him, are worthy of a leather-bound archival volume locked in a glass case. A really great vibe at this thing, all around. Then things got weird at the end when a buffoon in overalls near Aroma went ballistic because he thought someone had touched his guitar and loudly threatened to kick the shit out of a bunch of Mexican guys. 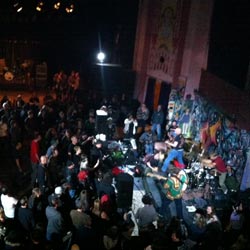 Nostalgia Fest at the Phoenix Theater: You know how the internet is all like “Vanna White Sex Tape!” and you’re like “Huh, really? This will be uncool,” but of course you can’t help but click on it anyway? Going to reunion shows is like that, except you’re not watching in the privacy of your apartment but in public, with others, experiencing the spectacle together. The Louies were tight, and Coffee & Donuts were better than ever, and I still know literally every single word on Things I Hate to Admit, and when I came home I grabbed the first album by a new band that I could find. 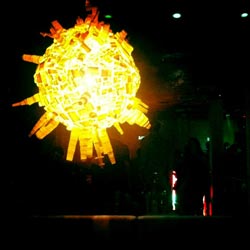 Semi-Evolved Simians at the Arlene Francis Center: A couple weeks after this, they broke up for good with an official final last show, but I chose to remember them with this one. Not a lotta people there, but they played their guts out—cementing themselves as one of Santa Rosa’s more unique, thoughtful and interesting punk bands. Here’s to six good years, guys.