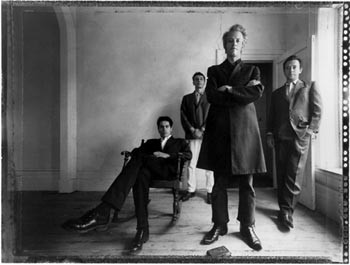 Four Horsemen of the Rockalypse: 16 Horsepower

16 Horsepower: Christian rock that even a sinner can love

REMEMBER the old saw “What do you get if you play a country and western song backward?” The answer: “You get your wife back, you get your house back, you get your dog back, and so on”–the joke being a play on country music’s reputation for being a self-pitying litany of cornier-than-thou woes.

But if country music is associated with syrupy sentimentality, it is also a rich field for exactly the opposite sensation. It is, as Nick Tosches writes in his wonderful book Country, “aflash with images of sex, violence, and redneck existentialism.”

As Tosches indicates, there is a whole school of thought whereby a certain strain of folk, country, and rockabilly music–far less popular, but much more convincing than the stuff coming out of Nashville–is the most menacing art form around.

Jerry Lee Lewis is, of course, the mother of this line of country. Australian punk rocker Nick Cave’s twisted take on American country is equally awash with folksy roots and scary biblical references. The Afghan Whigs, the Rev. Horton Heat, and even Bruce Springsteen all see the inherent irony of rock music being used to speak on godly subjects–an irony they all play on to a greater or lesser degree.

16 Horsepower is the latest great American act to deliver up folk-tinged alternative country-rock with a very, very, damaged core, as evidenced on the band’s newly released Low Estate (A&M).

This is picking and a grinning with a vengeance; the mandolin never sounded quite so mean as it does on “Brimstone Rock,” the opening track. The song begins with singer David Eugene Edwards yelping, “Listen closely to me now my darlin’ girl/ There’s one who’s out to have you an jus’ his breath will burn your curls.”

That “one” is, of course, the devil, a character who stars in many of 16 Horsepower’s songs. Even the title of the album comes from the Bible (“Set not your mind on high things but condescend to men of low estate, and be not wise in your own conceits”).

But make no mistake. The band’s allegiance to country is a conceit, and the use of words like “kin” and “ain’t” is highly calculated. Although the band is based in Denver, two of its members, drummer Jean-Yves Tola and bassist Pascal Humbert, are actually French. This geographical fact may account for the band’s powerfully imaginative take on Americana. Europeans are often fascinated by the Bible belt’s harsh view of Christianity, and Low Estate is very, very Flannery O’Connor: literary, eerie, steeped in the idea of the failings of religion.

Perhaps to add to its mystique, the record was recorded on a Lousiana plantation. Don’t tell these guys that most Americans live in condos and housing estates and have long since given up Bible-thumping for The X-Files and Oprah–they do not want to know.

The only thing is, “effect” is the right word for it, because despite 16 Horsepower’s hickoid instrumentation and folksy tempos, Low Estate has about as much in common with both folk and the kind of Nashville country characterized by Reba McEntire and Garth Brooks as ska, punk, or opera.

Instead, songs like “Sac of Religion,” “Ditch Digger,” and “Black Lung” are rocked up and stylized, thoroughly intellectualized takes on the topic of the contradictory nature of religion. But they are no less enjoyable for that.

Indeed, 16 Horsepower’s point of view isn’t unique, nor is the band going to shake the souls of either the believers or the unbelievers among us. But the group’s music is certainly far better done, more sincere, and more convincing than many an act that purports to take God’s name in vain.

Unlike Marilyn Manson, 16 Horsepower at least has a soul to lose.