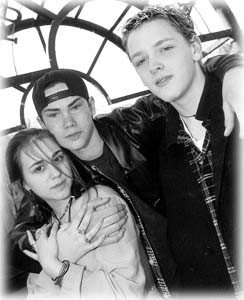 Has the press misled the public about Petaluma youth invading Helen Putnam Plaza?

A MINIATURE PARK in downtown Petaluma–set with cozy benches, grassy plots, a small fountain, and designed for the enjoyment of everyone–is making no one happy these days. A recent flurry of articles in local newspapers has depicted Helen Putnam Plaza on Petaluma Boulevard North as a combat zone, where merchants and a horde of supposedly arrogant youths are duking it out amid petty crime and proposals to install video surveillance cameras and blaring classical music as deterrents.

But now, some factions involved in the fracas are downplaying the reported conflicts, saying the mainstream press has both overblown and inflamed the situation.

“I thought World War III was going on here, but that’s not the case,” says Jim Matto-Shepherd, a local psychologist brought in by the Petaluma Downtown Association last week to mediate the various factions. “I guess the press focuses on what sounds more dramatic.”

Merchants, police, and city officials, according to published reports, were bent on using “Orwellian” electronic monitoring of activities and tracking of individuals to quell crimes by youths congregating in the park.

Jill Scatchard, owner of the Boosha gift shop on the plaza, says the reports are “inaccurate” and that the press is “overplaying” the circumstances. “They’re trying to create a negative ‘us and them’ feel to it,” she says. “The merchants in the plaza know the majority of people by name. There’s a wide variety agewise, but the majority are perfectly well-behaved.”

In addition, Linda Buffo, executive director of the 175-member Petaluma Downtown Association, claims articles in the Petaluma Argus Courier misstated that she labeled youths in the park “social deviates.”

“This was inaccurate and only incensed the situation,” she maintains. “We intend to seek a retraction.”

However, even without assigning individuals that specific label, Buffo states that the conduct of some of the youths in the downtown park is not socially acceptable. “We’re addressing behaviors,” she observes. “These aren’t just policing issues. We’re putting together a collective of people that want to change behaviors. We need to go back to being respectful of others, understand about old-fashioned respect for each other.”

A Feb. 27 merchants’ forum sought to outline solutions and organize a general meeting with community members, including the youths who congregate in the park. “We’re searching for a way to have a dialogue and we’re seeking advice from Petaluma People Services Center, Parks and Recreation, the City Council, the school district, the chamber of commerce, and other agencies to help put together a dialogue,” explains Buffo. “We don’t want confrontation and negative energy–we want only positive energy.”

She says a steering committee is being formed and there are plans to redesign areas of the park, which merchants say impede customers from walking into businesses. Buffo says changes–some suggested by Petaluma High School drafting class students–will be in keeping with the general scheme of the park. “There will be no gates, no thorny bushes. We’ll still have grassy areas and a new stagelike area for performances and presenting awards during parades,” she says.

MEANWHILE, youths who have gathered in the centrally located park–which was dedicated in 1987 by the city of Petaluma and its citizens in memory of former mayor and county supervisor Helen Putnam, long before recent merchants, including Starbucks, moved in–are dismayed the turn of events.

It’s unfortunate people frown on us because we have a place to hang out,” says Petaluma High School student Alison Anderson, 16, gesturing towards the green lawn with an arm jangling with thin silver bangles. “As for putting in music, that’s very amusing–we love classical,” she adds. “If they were playing Beethoven, I’d think it was cool. They think culture is going to push us away.”

She ways that Buffo’s goal to change behavior patterns won’t work. “You can’t change individuals unless you know them personally,” she observes. “Granted, some of the actions of some of the people can be quite disrespectful, but anywhere in life, some of the people are going to break the rules.

“It’s too bad these few are giving us a collective bad name.”

The teens say they congregate in Putnam Plaza because it’s in a central part of town (many live just blocks away); because it’s close to the Phoenix Theatre, where there’s a well-defined counterculture social scene; and because in Petaluma “there’s not much to do that doesn’t take a lot of money.”

“My parents like me to hang out here–it’s central and if there’s an emergency and my mom needs to find me, she knows I’m within a three-block radius,” says Valley Oaks student Adam Lovato, 15. “But the cops want us out of here.”

Fred Gray, a 15-year-old Petaluma High School student with spiked, dyed blond hair agrees. “If we needed a baby sitter, our parents would have got one for us,” he comments. “This is a social hangout–a public place to hang out after school with friends.”

Petaluma Police Capt. Pat Parks says the corridor between Putnam Plaza and the Keller Street parking garage has the “greatest concentration of [police] calls” in the downtown area. His says recent crimes have varied from drug and alcohol violations and auto burglary to unruly behavior and acts of vandalism. “The activity there does have an impact on the businesses. There have been complaints from merchants and patrons; the element of fear certainly is accurate,” says Parks, adding that police will continue to patrol the park “pretty vigorously.”

Last Friday, Parks says he sat in the plaza in plain clothes for one and a half hours and monitored activities there. “There was some intimidating behavior, but a lot of the individuals used it in the manner intended–they chatted and did the kinds of things we’d expect,” he reports.

However, he says, plans are in the works for broadcasting amplified classical music, a tactic that has had little success in deterring youth from congregating in Santa Rosa’s Courthouse Square and elsewhere in the Bay Area. “Speakers have been purchased and the city has issued a permit,” Parks says.

The question of installing video cameras outside the public rest rooms adjacent to the plaza, which merchants say have sustained some $3,000 damage in recent months, remains undecided. Pam Allen, manager of the Starbucks building, where the rest rooms are located, says owners have “no plans for putting in cameras.”

But merchants say they will continue to clamp down on crime in the plaza. “We’re calling for a line that nobody crosses,” says Buffo. “We’ll never have a Disneyland, but our goal is to have as little illegal activity as possible.”