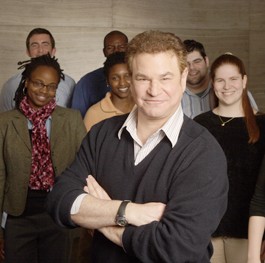 History repeats itself—and apparently that’s all Robert Wuhl needs to create a successful HBO special. Though Wuhl may not have instant name recognition, his face has that special kind of familiarity that tends to confuse those who come across it in a supermarket. In fact, Wuhl has had a long career in acting, holding small roles in films from Flashdance to Bull Durham and Good Burger. Chances are you’ve probably seen him in something.

But now Wuhl’s been gaining recognition on his own terms. In 2006, Wuhl wrote and starred in the first chapter of his two-part HBO comedy special, Assume the Position with Mr. Wuhl, which takes the view that history is dictated by pop-culture and, well, bullshit. Thus the show is loaded with sardonic and edgy matter, including Wuhl’s theories on America’s vapid obsession with celebrity culture and the U.S. Constitution originating in a “grammatical fuckup.”

Now, Wuhl has adapted the second chapter in the show to stage. Assume the Position 201 enumerates the powerful buffoonery in American leaders, and tones of Wuhl’s signature comedy abound with games like “Real or No Real,” which questions the very existence of American historical icons. In Wuhl’s world, cultural self-deprecation and standup comedy really are American as apple pie.