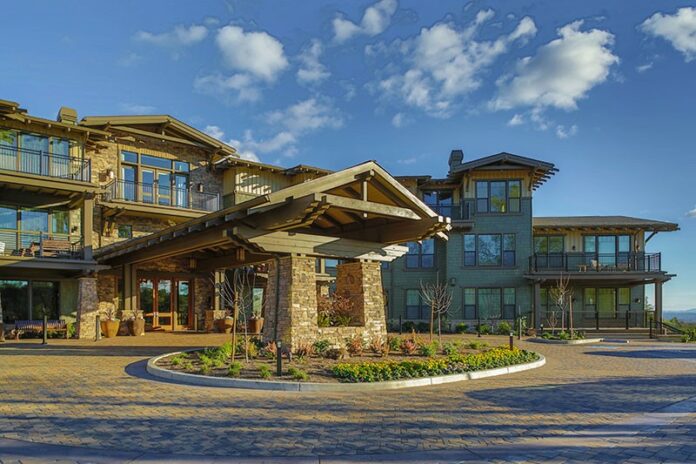 When plans were first announced years ago to establish an upscale LGBT retirement community in Sonoma County, the idea was nothing short of revolutionary. The first of its kind in the nation, Fountaingrove Lodge was dreamed up as a place where lesbian, gay, bisexual and transgender seniors and their allies could spend the post-work years of their lives in a beautiful location, with luxury apartments that offered an option for continuing care services. With a golf course, a gourmet restaurant, unbeatable views and 10 acres on which to roam in safety, security, comfort and beauty, the project was immediately controversial—not due to the idea of same-sex couples retiring in peace, but because the size of the facility caused concerns to locals eager to protect the environment.

Any way you look at it, that’s social progress. After addressing the environmental concerns, developers Bill and Cindy Gallaher, who’ve created a significant senior-citizen empire through building state-of-the-art housing complexes all over the country, forged ahead and brought the long-overdue dream to life. In November, the first residents moved into Santa Rosa’s Fountaingrove Lodge, and the only shockwaves caused were from the realization that, until now, no facility of its kind had existed anywhere in the country.

As the first generation of LGBT Americans to have lived the majority of their lives out-of-the-closet, Fountaingrove’s inaugural group of residents know the truth: while things may be about to get better, the present is often not so great for gay and lesbian seniors, who experience far higher incidents of abuse and neglect than straight seniors. Reports show that many LGBT seniors are at increased risk of depression and suicide. There are also numerous reports that many gay and lesbian seniors, fearing discrimination, go back into the closet for the first time in decades when leaving private homes to take residency in group-care facilities.

While Fountaingrove is certainly a pricey option, it offers hope that the tide has turned. In the future, as indicated by reports of several similar facilities now in planning or construction phases around the country, old age might become something to look forward to for LGBT seniors, who previously had no practical models of safe, inviting housing.

And who knows, maybe it won’t be that far in the future before a senior’s sexual orientation and gender identity are no big deal. fountaingrovelodge.com.—D.T.

The long-planned, years-in-the-making Children’s Museum of Sonoma County has been adding a few finishing touches, and it’s almost ready to open to the public. A few lucky early visitors got to test out the place in anticipation of its official grand opening on March 29 (additional parts open at the end of 2014). With an emphasis on science and exploration, the brand-new facility—located in a former church next to the Schulz Museum in Santa Rosa—is a bit like Alice’s Wonderland, if Alice were a bit of a nerd. In other words, it’s perfect for kids, who are naturally curious and always seeking entertainment. The museum has indoor and outdoor areas, including a mesmerizing hydroelectric exhibit that shows how water can be turned into energy by pumping and releasing a water-spinning turbine. There’s a nature education garden, with butterfly-themed playground tractor rides, buried treasure excavations, an art studio and a miniature replica of the Russian River. 1835 W. Steele Lane, Santa Rosa. 707.546.4069.—D.T.

Struggling with your Spanish conjugations? Need help navigating those Facebook pictures? How about some collaboration on that calculus homework? All of these languages are part of Sonoma County’s Language Truck, an innovative cross between a bookmobile and a food truck. Teacher and Language Truck founder Bridget Hayes needed a way to reach students after recession-era budget cuts closed many of Sonoma County’s adult schools. So two years ago, the Santa Rosa resident outfitted a mini-school bus and created a mobile tutoring service. The result is the coolest, most accessible classroom around. Inside, work stations have computers and the walls double as instructional white boards. Outside, the bus is a center for workshops and neighborhood events. At wineries, CEOs are learning Spanish while their employees study English. Senior citizens are gathering for morning coffee and email tutorials. Mothers study for citizenship exams with toddlers on their knees. While the main focus is learning, community building is an inevitable positive side effect.
www.languagetruck.com.—J.O.

Anyone who’s been to an elementary school at lunchtime understands the atrocious amount of waste generated in just one cafeteria session. The next day,
it happens all over again. Multiply that waste by thousands of schools across
the country, and you get a pretty unsustainable picture. That’s why the efforts to establish a “green culture” at the Santa Rosa French-American Charter School are so innovative and heartening. Working in partnership with the Ratto Group, the company behind Santa Rosa Recycling and Collection, the school’s Green Committee has set up a complex, all-encompassing recycling program. Recyclables are sorted out each day, and commercial compost bins accept all food waste and soiled paper products. Plus, kids at the school are learning what it really means to send things into the waste stream, and how there is another way to do it, a way that thinks outside of the (trash) box and beyond, into the future. unicycler.com.—L.C.