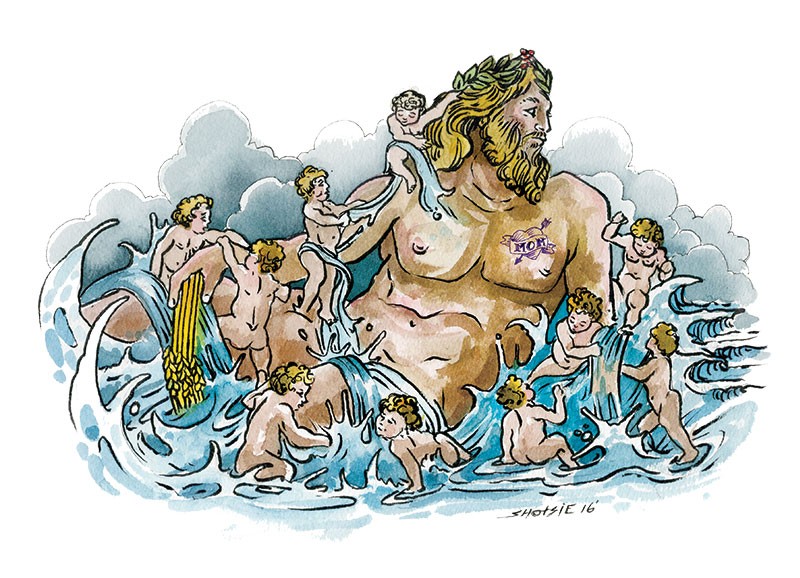 Sonoma County native and mother of four Janelle Hanchett was tired of the bullshit. Despite the endless amount of motherhood-based blogs and online forums, Hanchett struggled to find anyone writing about personal experiences that matched hers, and anyone willing to open up about the day-in, day-out challenges of parenting—in short, she struggled to find anyone who told the truth about the unrelenting task of raising kids.

So Hanchett decided to stop looking and start writing. In 2011, she founded the no-holds-barred Renegade Mothering blog to open up about the most taboo subjects surrounding motherhood. And she spares no expletives in her rants and inspirational tirades that rail against society’s sugarcoated view of what a mother is supposed to be.

Five years later, Renegade Mothering tops tens of thousands of views each month. Hanchett is the first to admit that she’s not everyone’s cup of tea, yet her diatribes about everything from asshole parents in restaurants to her own past battles with alcoholism (which earned Hanchett the BlogHer Voice of the Year Award in 2014) are increasingly seen as important conversation starters in a world where women often undertake motherhood alone and unsupported.

In addition to her fearless approach, Hanchett is a damn fine writer, and her sharp prose and acerbic point of view is as out-loud funny as it is biting. Currently working on her first book, Hanchett also leads online writing workshops, encouraging aspiring writers to stop worrying about what people think and write anyway. Hanchett’s next six-week workshop is scheduled for May 2016. www.renegademothering.com.—C.S.

Eating meals at home as a family is important, but it’s not always possible. Sometimes there just isn’t time. Or the fridge is empty. Or you just don’t feel like cooking and would rather have a beer and pay someone else to do it. When such circumstances occur, I head to Papas and Pollo. It’s cheap, the food is good and healthful (I’m a fan of the barbecued pork taco plate—$10 with rice, beans and salad), the kids can wander around and not bother anyone, and the beer is cold. You can bet the Warriors or Giants are on the telly, too. Once the weather dries up, the backyard, open-air patio—complete with lounge chairs set between raised vegetable beds and walk-up beer and food window—will be the place to be for some away-from-home family time and good food. 915 Gravenstein Hwy. S., Sebastopol. 707.829.9037.—S.H.

Yes, we need the rain, but being cooped up makes the kids restless and the parents edgy. So here’s what you do: take your kids over to Flying Frog Academy in Rohnert Park. Instead of jumping off couches and bunkbeds, your kids can learn the ways of parcour. You know, parcour, the urban-born sport of jumping, leaping and flipping from ledges, walls and various obstacles. Flying Frog has taken the sport indoors and created a fun and safe environment for kids (and adults). They’ve got classes, camps and open gym hours. 215 Classic Ct., Rohnert Park. 707.292.8201.—S.H.

In the casinos, you like to play the machines where the odds are pretty good that you’ll win—or not lose too much too fast. Casino junkies will get to know and hover around slot machines with a history of paying out on a consistent basis. There’s a corollary for kids and families in those popular claw-machine games. You know, the one where you put in a quarter and try to lift a worthless trinket with a crane-like claw. There’s a bunch of them in the North Bay, and if you hit these machines on a regular basis, you know that most of them are a total rip-off. You put in the quarter, and you can never grab the stupid toy. Before you know it, mom’s just blown half her paycheck, the kids are weeping, and it’s very sad. But here’s an insider’s tip: the machine at the Santa Rosa Kmart on Cleveland Avenue pays out on a pretty consistent basis—one toy for every $10 you waste, on average. That’s not a great return on your investment, but at least
no one’s crying. 3771 Cleveland Ave., Santa Rosa. 707.544.2245.—T.G.

Best Place to Refuse to Buy Your Kids New Clothes

One of the many things you can’t know about kids until you actually have some of your own is all the clothes you’ll need to buy for them. Those little buggers just keep outgrowing the pants and shoes you just bought for them, like, six months ago. Buying new clothes for kids is for suckers. Or for grandparents, in which case it’s fine. New socks and underwear are fine too, but I say it’s foolish to buy new clothes when you can get something perfectly good at a fraction of the price secondhand. It’s good for the wallet and for the planet. My favorite place for pre-owned kids’ clothes is Santa Rosa’s Wee Three. I was looking for snow boots for my daughter, and it made my day when Wee Three had just the pair I was looking for—at about $50 less than new. The store tries to carry only cotton and wool, which is cool because polyester stains, you know. When your kids do outgrow their clothes, march back into Wee Three and sell them back (the clothes, not the kids) so you can get some more. It’s a virtuous circle. 1007 W. College Ave., Santa Rosa. 707.525.933.—S.H.

Best Fun Adventure to Look Forward To,
with the Kids

The long-anticipated opening of the Sonoma-Marin Area Rail Transit (SMART) system is scheduled to go down late this year, and everybody’s freaking excited about it, for the most part. Who doesn’t love to ride a train, just for the pleasure of riding a train? Kids love that stuff, and so does dad. So put it on the calendar for your Christmas break 2016 plans: you are going to ride that train. It’ll take some work, perhaps. You’ll have to pry junior away from his beloved Thomas the Tank Engine sets, and might have to inform the kids that the “Little Choo-Choo That Can” is a stupid, unrealistic story. What’s not stupid is the SMART train—your best bet for a low-cost adventure on the rails awaits. Just don’t let the kids put their feet on those new SMART train seats.—T.G.