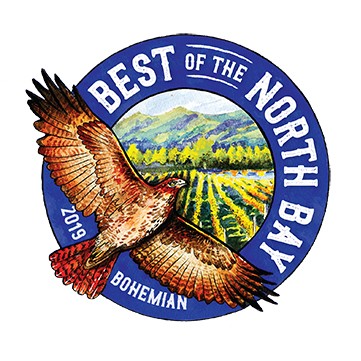 Best Spot to Appear as Though You’re Doing Something Constructive

Looking for someplace to go where you can feel good about leaving your home without having to give up the comforts of your living room? Are you a moderate to very social person simultaneously plagued with being a homebody? Introducing the
red velvet couches at Brew Coffee & Beer House in Santa Rosa.

These are not your typical public couches. They somehow flaunt a new-couch level of cleanliness, and maintain the appeal of their timelessly fashionable maroon velvet covers. Throw your limbs across their supportive, cocooning cushions, pull out your computer and pretend to do work but watch a show instead, because on these couches, you can let all pretense about doing work fall between the cushions. How can these couches hold all the securities of being at home with nothing more than two soft maroon cushions? They come from a home, of course!

Brew’s co-owner, Jessica Borrayo (pictured, on right, with co-owner Alissa Cottle), brought them from her mother’s house. “I had them for as long as I can remember,” she says, “I was nervous giving them to the public.” From the couches, you’re privy to Drag Bingo, you can sip on a Golden State Cider and draw during Drink and Draw nights, or you can look on anxiously from a safe distance during open mic night if your friend is not as funny as either of you had hoped. Whatever the occasion, the couches have your back—and your legs and butt too! 555 Healdsburg Ave., Santa Rosa. brewcoffeeandbeer.com.—A.M.

So you want the best honey? Good luck. The very best honey is hard to come by. The honey market has been infiltrated by cheap imitations from China and Vietnam. If you want the best honey, keep your own bees. And if you want to learn how to do that, take a course in beekeeping from Serge Labesque, one of the world’s most knowledgeable beekeepers. No kidding. He lives right here in Sonoma County and he teaches at Santa Rosa Junior College. His classes are for beginners and for those who know a thing or two and want to learn more. Not surprisingly, his lectures are well-attended. Labesque makes a complex subject relatively easy to understand. Honey from the bees he cares for is sold at the Red Barn at Oak Hill Farm in Glen Ellen, but it’s so good that it sells out fast. It’s best to call and ask if there’s any honey available, though a visit to Oak Hill Farm is always a thrill any time of the year. The vegetables and the fruits are organically grown, and the honey from the bees at Oak Hill Farm doesn’t have harmful herbicides or pesticides. You wouldn’t want to use olive oil that has been mixed with cheap vegetable oils, and you shouldn’t use second-rate honey. Do yourself and the planet a favor: learn about bees and about honey. It’s a great way to connect to the world of nature. Sign up for one of Serge Labesque’s SRJC classes.—J.R.

Glen Ellen, Jan. 28: There was an ongoing dispute between neighbors regarding a fence line and an easement. That’s a typical report from the Crime Watch column of the Kenwood Press, a tersely written weekly roundup of calls received by the Sonoma County sheriff’s substation serving Glen Ellen and Kenwood. In a way, this log of loud parties and barking dogs, nervous residents reporting suspicious phone calls, a car that’s been parked too long, or that man who sleeps in his truck, almost makes the reader feel that all’s generally well in country life, if loud laughers, lost dogs and stolen fruit are all that makes the news. But read on, and it gets darker: that methamphetamine pipe someone found in his bed. Threats from internet scammers. Out-of-control PG&E tree trimmers. Keep reading Crime Watch, and the individual reports blur into a kind of epic poetry about the tragicomic underbelly of the Valley of the Moon: Two people were reported skateboarding in an empty pool. A deputy went out and encouraged all parties to be nice to each other. A resident reported a man on the property acting strangely. The caller said she heard one man say, “That’s my wife!” and the other man saying, “I would never disrespect you.” The couple couldn’t tell deputies the exact location of the naked man. The homeless man and his vehicle were still parked in the lot of the Kenwood Depot. Deputies tried to contact the man but there was no answer. She thought a cashier had overcharged her for various items. Nothing further. A couple reported finding a jar of non-dairy creamer inside a wall of the house. A deputy went out and made contact with a male, who said he was upset over spilled milk. A loose horse was reported at 4:30am. A deputy drove out but the vehicle had already left. The yeller had left the scene. No charges had been made with the card. No other shots were heard after that. “Get the fuck out!” Nothing further.—J.K.

Best Place to Make a Fool of Yourself on April 1, Part One

On April Fool’s Day, while some folks focus on playing jokes on their friends, others are happy just to be the joke themselves. At the Buckhorn Tavern in Petaluma, for the last 20 years, when April 1 rolls around, owner Wes McCoy has donned a loud suit, placed a ridiculous hat on his head and played the master of ceremonies for the storied institution’s annual St. Stupid’s Day party. He runs a light-hearted Let’s Make a Deal–style game, giving out silly prizes, while the rest of the bar staff run crazy-hat contests, a toilet paper roll-off and plenty of other games. Bad jokes are told, confetti and ping-pong balls are tossed, and general merriment ensues. “I heard about St. Stupid’s Day from listening to Alex Bennett on the radio years ago,” says McCoy. “There was always a parade in San Francisco, and it sounded like fun. (For the record, the San Francisco St. Stupid’s Day continues to be a popular annual event.) So I started celebrating St. Stupid’s Day at the Buckhorn, and people really seemed to like it. We’ve been doing it ever since. Sometimes, you just have to stop being serious for a few hours and let yourself be stupid. Well, we’re here to help.” 615 Petaluma Blvd. S., Petaluma. 707.763.0365. buckhorntavern.com.—D.T.

Best Place to Make a Fool of Yourself on April 1, Part Two

In downtown Occidental, fans of foolishness and frivolity can celebrate April Fool’s Day with a wild and wacky annual parade and party. Festivities include outrageous outfits, the official crowning of “Queen and King of Fools,” something called “Lunapillar rides” and general over-the-top silliness. The parade takes place at 1pm, snaking down Bohemian Highway in the general direction of the Occidental Center for the Arts. Silly attire highly encouraged.—D.T.

I’m too middle-aged to get all rah-rah over how convenient everything’s getting. I didn’t feel tingles when I learned I could flip on the thermostat from an iPhone. I’m not moaning with relief knowing a refrigerator can tell me I’m low on English muffins. And you know, I still don’t care that I can stream a movie. The shift getting films onto a medium I could watch at home was innovation enough for me. Screw streaming. I want to spend precious time poring past rows of titles on spines till my retinas ache. And dammit, I can still do it, because Santa Rosa’s Joe Video thinks it’s worthwhile too. After the bloated chains like Blockbuster and Hollywood met their demise (not a great loss), and the mighty Video Droid succumbed to dwindling business due to the 2017 fires (a great loss), Joe remains as one of only two surviving video stores in Sonoma County. In addition to its ripping selection (choice classics!), Joe does cool things, like sell any movie in stock and order any movie not in stock, for rent or sell. Plus, as Joe is an independent, where staff don’t have to wear ill-fitting uniforms and can let their freak flag, as they say, fly, you get to hear weird things. I was there one afternoon, lurking too near the counter so I could eavesdrop on the conversation the staff were having about movies, because when the staff at places like Joe Video hold a conversation, on anything, it’s always a nutty ride. Their voices dropped lower, so I knew something worth straining to overhear was on its way, and I managed to catch this joyous tidbit: “What if outtakes were actually interesting—like, all of the sudden there’s Chewbacca giving Han Solo a blowjob.” And I thought: God bless America! Long live the independents! 411 Stony Point Road, Santa Rosa. 707.544.2158. joevideoonline.com.—G.B.

Every town has at least one good character. In Healdsburg, his name is Mike Peterson, but he’s commonly known around the place as “Davey Crockett,” for obvious reasons. A longtime local resident (allowing for the 12 years he relocated to Ukiah before returning in 2016), Peterson was born and raised in Petaluma, and now strides about Healdsburg dressed just like Crockett (don’t even try and call him Daniel Boone), with coonskin hat, boots, buckskins (he’ll tell you he made them himself from “authentic animals”) and a replica powder-powered rifle. An outspoken critic of the city’s shift toward upscale restaurants and wineries, Peterson is as interested in classic rock music as he in looking like a re-enactor from a mountain-man convention. A self-described “blast-from-the-past DJ,” he even occasionally hires himself out to play tunes on actual vinyl, and often writes colorfully critical letters to the local newspaper. Oh yes, and he’ll happily pose for pictures at the local bar. He might even accept a drink as thanks.—D.T.

Best Use of a Pun in a Divebar Sidewalk Sign

In addition to its reputation as one of Petaluma’s oldest and most authentic dive bars—with dozens of mounted animal heads on the walls, along with the various weapons that brought them down—Andresen’s Tavern in Petaluma has been sporting a delightfully direct, pun-powered sidewalk sign that has proven to be a first-rate attention grabber. Given that Petaluma has recently announced that puns will be the theme of its upcoming Butter and Eggs Parade on Saturday, April 27 (with the whole celebration bearing the title “It’s Always Punny in Petaluma”), the verbal whimsy of Andresen’s sign is not just fun, it’s downright Shakes-beer-ean. 19 Western St., Petaluma. 707.762.6647.—D.T.