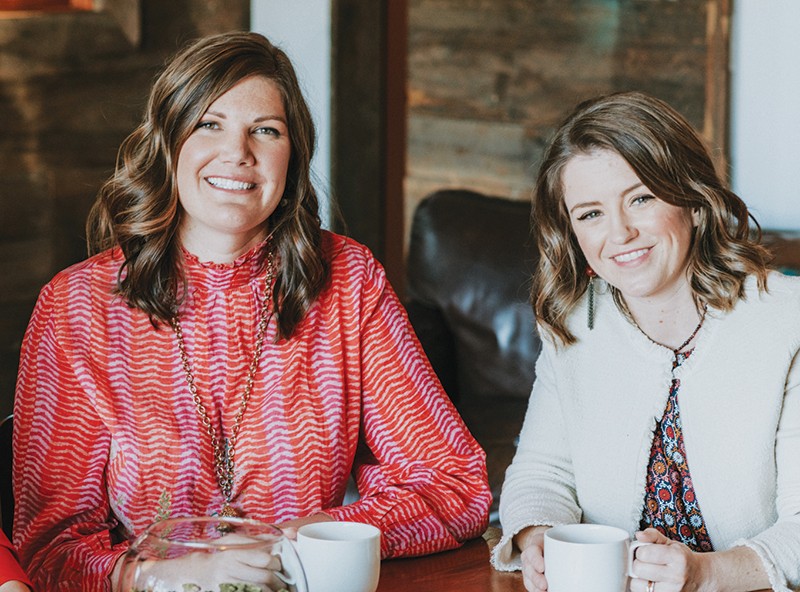 Best Biodynamic Cannabis
for All Sexes

What a difference a year makes! It has for Garden Society, a local cannabis manufacturing company owned and operated by Erin Gore and Karli Warner (pictured, left to right), who spent most of 2018 nailing down permits so they’d be legal. The weekend before Valentine’s Day, they gave away cannabis-free samples of their chocolates at Sol, where seniors scarfed them. The cannabis-infused version gets me stoned, and, while it doesn’t kick in right away—usually the case with edibles—it keep me stoned for a long time, and makes me feel lusty.

While I’m waiting for an edible to kick in, I smoke one of the pre-rolled Garden Society “rosettes” that come in a nifty box that fits comfortably in a back pocket. A rosette gets me high quickly, but not so high that I can’t function.

Garden Society cannabis is cultivated biodynamically in Mendocino County, where permits are easier to obtain than in Sonoma County. The chocolate in the edibles comes from Guittard, a company that deals with “fair trade” cocoa cultivators. Gore and Warner call their products “female-friendly.” They’re male-friendly, too. The milk chocolates with sea salt, Gore says, will “ensure a good night’s sleep,” and, while that might be true for some, it isn’t always true for me. It can wire me.

If you want an introduction to Gore, Warner and Garden Society, check out their podcast, Garden Society: The Podcast. If Erin Gore’s brother-in-law, James—Sonoma County’s fourth district supervisor—hasn’t heard the podcast, he ought to. He also ought to smoke a Garden Society pre-rolled with me, then kick back and talk about the Warriors, the Republicans and the politics of pot. thegardensociety.com.—J.R.

Best Place to Get High, According
to Grandma

The last time I went to the Grove of Old Trees, it was with my younger sister and grandparents. It was one of those Northern California days in January when the sun is out and the sky is clearer than it is in the summertime, when the air is still crisp and clean from the morning frost but has warmed from the sun. My grandmother had packed us lunch in a picnic basket, one covered in red-and-white checkered cloth. It was in pristine condition; even though she got it in the ’70s, there was no indication it had ever been used before. My sister carried the picnic basket and I carried the matching checkered blanket as we walked into the darkness of the towering redwoods, so dense sunlight barely scraped in between their branches. As we walked, forest critters darted in front of us on a dirt path, and the deep sound of a great horned owl (so my grandfather told us) could be heard. Eventually, we got to a grass clearing. The day was beautiful, and the whole field was slathered in sunlight as we spread out our blanket. We unpacked what my grandmother had assembled: the neatly folded napkins, the bundled plates and utensils, four small mason jar glasses and our pasta salad. After we had been quietly eating for a few moments, my grandmother looked around and said, “This is a perfect place to smoke a joint.” Grandmothers always know best.
17599 Fitzpatrick Lane, Occidental. www.sonomacounty.com/outdoor-activities/grove-old-trees.—A.M.

Best Way to Rub Weed All Over Your Body

Napa County has been moving slowly on opening up wine country to commercial cannabis cultivation after the passing of Proposition 64. To date, only one medical dispensary, Harvest of Napa, exists in the county, and there are zero recreational dispensaries. That doesn’t mean there’s no cannabis being cultivated in Napa Valley, of course, and groups like the Napa Valley Cannabis Association are working to make above-board cannabis agriculture and a legitimate cannabis industry a reality in the region. For now, the best legal cannabis export coming from Napa is the topical balms of Napa Valley Cannabalm, whose boutique, handcrafted and doctor-formulated balms are ideal for chronic pain relief and anti-inflammation. The Cannabalms, which come in scents like Rosemary, Peppermint and Lavender, are made with all-organic ingredients like Cannabis Sativa seed oil, grape seed oil, olive oil, beeswax and essential oils, all grown in Napa Valley. When applied to trigger points on the body—the head, shoulders, knees and toes—the balms can relax muscles, reduce aches, increase circulation and soothe inflamed skin. Since the product is made with low amounts of cannabinoids and each two-ounce tin of Cannabalm contains less than 0.3 percent THC, there’s no psychoactive effects to worry about, and the balms can be traveled with, shipped to and used in all 50 states.—napavalleycannabalm.com.—C.S.

Best Example of the California Paradox

The California Paradox occurs whenever the state sets out on some ambitious policy initiative that another ambitious policy initiative would render null and void, difficult to achieve or a flat-out joke. Case in point: When the state set out to legalize cannabis, it did so knowing that there’s be no legal weed without lots of effort put into making sure nonmedical pot products are child-unfriendly, if not childproof. Given all the infused gummy bears and flavored vape whatnot on the consumer market, that’s a fair enough concern. But it also meant that cannabis products for the recreational masses would be enveloped in multiple layers of plastic packaging, a phenomenon which is demonstrably idiotic anytime a consumer unpacks a wildly overpackaged pre-rolled joint. It’s like they’ve got King Tut wrapped in the damn packaging and Steve Martin’s about to burst into song about it, but never at dusk. Enter the California Paradox: even as it has legalized weed, the state has also set an ambitious agenda to convert to a 100 percent sustainable-energy model by 2045. That means lots more solar and wind power and less reliance on the petrochemical industry and all of its oleaginous products. You see where this is all going. Petrochemicals are the building blocks of plastic. By the time California gets to 2045, we’ll already be drowned under a sea of plastic pre-roll tubes, and the sea will itself lap the shores of a new Central Valley beachhead. So here’s to the quick emergence of a robust hemp-plastic industry. It’s the only way out of the Paradox.—T.M.P.

You think it’s easy, putting together a photo shoot with Marigold’s Pineapple Harlequin CDB-rich pre-roll? Well, it’s not, as we learned recently. We invited the joint to the Bohemian offices with the news that it had won the award for Best CBD-Rich Pre-Roll That You Can Smoke at Dawn and Still Have a Productive Day at Work, and we arranged for the photographer to show up as well. This stuff takes planning, people. The photographer arrived at the scheduled hour, looking typically jaundiced and frantic, and set up his gear. We put out a spread of cold cuts and cheese, some grapes and wine, to stimulate an artful pose from the pre-roll and to get the photographer to relax. It was his first photo shoot with a bona fide A-lister. We told the photographer that we were going for a tastefully nude approach to the shot, but maybe with some beefcake edge. The model release forms were all signed. The bosses were informed of our intentions. But . . . but . . . when it came time to take the shot, the joint was nowhere to be found. Poof, just like that, puff of smoke. All that remained was the packaging—the green and yellow Marigold box, and the plastic tube that held the pre-roll. We checked everywhere. Under the desk, in the fridge. Everywhere. Seriously, where the hell did that joint go? And why is the intern writing blank-verse poetry with a mythical edge, on deadline day? Fuckin’ kids these days.—T.M.P.