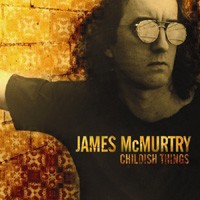 Savoring a plate of piping hot chicken gizzards at a Nashville eatery, Texas singer and songwriter James McMurtry chooses his words carefully as he also forks over bits of political commentary and insights into his songwriting process. “Sometimes you get lucky and you write something that people already are thinking,” he says, speaking on his cell phone. “You’re just giving words to the thoughts and feelings that they have. But it’s pretty rare.”

Fortunately for a growing legion of fans, at least one of those “rare” songs came to a full boil for McMurtry–who appears Oct. 5 at the Mystic–in the past year. There’s no question that the seven-minute epic protest song “Can’t Make It Here,” from the recent album Childish Things, has struck a chord with its angry indictment of the Iraq War, outsourced factory jobs, rising gas prices and social neglect.

The song, delivered in a snarling spoken-sung style, has prompted rave reviews, captured radio play on stations pushing the burgeoning Americana format and driven bloggers to ponder the depth of this blue-collar anthem. Author Stephen King called McMurtry “the truest, fiercest songwriter of his generation” and hailed “Can’t Make It Here” as “the best protest song since Bob Dylan’s ‘Masters of War.'”

That’s unusual, in part because McMurtry is best known for deeply personal portraits that capture the vulnerable side of human nature. Certainly, he can now step out of the shadow of his famous father, Texas author Larry McMurtry, who just picked up an Oscar for his screenplay to Brokeback Mountain and who penned Lonesome Dove and other novels of the Old West.

On the night I spoke to McMurtry, he later picked up Album of the Year (Childish Things) and Song of the Year (“Can’t Make It Here”) honors at the fifth annual Americana Music Awards show at the Ryman Auditorium.

He acknowledges that “Can’t Make It Here” is something of an anomaly. “Nothing turns me off more than a songwriter trying to make a point or trying to save the world,” he says. “But things have just gotten so weird and the press really hasn’t been doing its job in terms of questioning the powers that be, so that leaves it up to the artists.”

While the Bush administration’s constant bullying prompted him to speak out, McMurtry’s dissatisfaction had been brewing for a while. “One of the most disturbing things I’d seen was in the fall of 2000, well before Florida even came into play in the election,” he recalls. “At the time, Pennsylvania was hanging in the balance and a CNN reporter was interviewing then-Pennsylvania governor Tom Ridge, who later became the head of Homeland Security.

“The CNN reporter asked, ‘How do you plan to deliver Pennsylvania?’ Ridge looked him right in the eye and said, ‘Well, we’re currently trying to hold down a massive turnout in Philadelphia that could hurt us.’

“The disturbing part is that nobody said, ‘Excuse me, governor, what the hell do you mean that you are trying to hold down a turnout?’ They just said, ‘Thank you for your time, governor.'”

That might help explain why “Can’t Make It Here” has grabbed the attention of those who feel disconnected with the electoral process and unsure that elected officials are capable of, or even interested in, the challenges facing so many people every day.

Of course, the music community’s role in speaking out on political, cultural and social issues is a subject of heated debate, especially in the mainstream news media. The Dixie Chicks caught plenty of flack for speaking out early on, criticizing Bush for invading Iraq (Natalie Maines later tried to backpedal from her statements during an ABC-TV interview). And more recently, Harp music magazine blasted Neil Young’s Living in War protest album as too little, too late.

But McMurtry says that the public shouldn’t wait for movie stars, musicians and other artists to lead the charge. “Everybody has a responsibility as citizens, so it’s unfair to pick on the musicians,” he says. “But the press certainly has a responsibility to question the actions of our leaders; it’s their job to question and to expose, but they have not done it. That’s what the fifth estate is supposed to do.”

Maybe, but fired-up bloggers on McMurtry’s MySpace.com page are making it clear that they’re happy to have found a kindred rebel spirit in this Texas singer and songwriter. As one blogger reminded, “A working-class hero is something to be.”