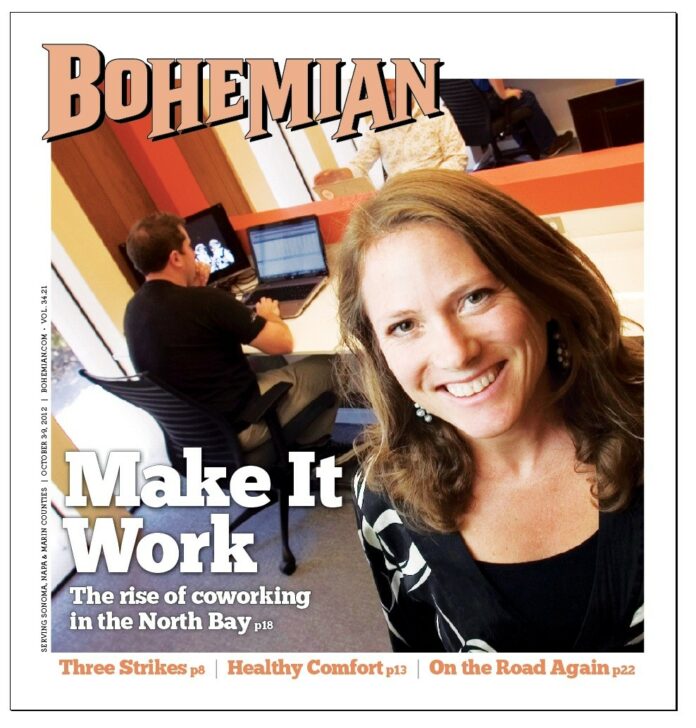 It’s a bright morning in September, and WORK, a new coworking space in downtown Petaluma, bustles with members busy on projects and tasks. At one desk, a book editor combs through his latest batch of manuscripts. At a large white table nearby, an event planner maps out details for a client. Everybody here works under the same roof, yet they’re performing seemingly unrelated jobs, with no apparent job supervisor.

It’s all in a day’s work in the sunny and spacious former law office, decorated in midcentury modern décor, where Stereolab plays in the lobby and tall windows look out to the world beyond.

Like many a good idea, WORK was born of necessity. After struggling to find alternatives to the traditional office, which can be expensive to rent and maintain individually, Natasha Juliana—who owns the space with her husband, Matt Moller—thought the time was right to implement coworking in her hometown.

“I first heard about coworking on NPR a couple of years ago,” says Juliana, as we talk over pastries and coffee at a communal table in the cheery main room. “I started doing some research and saw how booming and popular cowork spaces were in the Bay Area. I looked at the demographic of the people we knew in Petaluma, and there were a lot of ex–San Franciscans, people who were commuting or working from home or starting their own businesses.”

But what exactly is coworking? According to online magazine Deskmag, coworking is the use of a shared workspace by independent entrepreneurs, freelancers and creative and tech professionals as their place of business. In other words, it’s a way to get out of the house and into an environment that can be more productive, for reasons including access to a wider community and an environment focused on getting things done.

The cost for a coworking space ranges from $100 to $400 a month, depending on the choice of membership level. That’s a price that usually includes Wi-Fi, coffee, copies, fax, mailing services, designated desk space and, last but not least, companionship with other workers, even if they aren’t in the same business.

“If you’re looking for a community of fellow entrepreneurs to be around, coworking spaces are ideal places to work,” says Genevieve DeGuzman, co-author of Working in the ‘UnOffice’: A Guide to Coworking for Indie Workers, Small Businesses, and Nonprofits. “It’s the camaraderie that sets it apart from other remote work locations. You’re no longer just getting that startup or freelance career off in your lonely little bubble. Now you have a tribe—people to be around without the office politics.”

Coworking is a trend that’s only growing, in part attributed to the fact that more people in the new century are either working for themselves or telecommuting to their jobs. Environmental consciousness and economic realities have led many people on the path to commuting less and using time once spent in the car to work more efficiently. According to the Second Annual Global Coworking Survey, in 2006 there were only 30 coworking spaces in operation in the world. As of 2012, there are now 1,779 around the globe.

Considering its history of innovative, creative and technological thought experiments—the type of thinking that leads to Facebook, Google and Twitter, all headquartered in the Bay—it’s no surprise that coworking has taken off in San Francisco. The origin myth credits Brad Neuberg, a computer programmer who now works for Google, as the first to coin the word “cowork” when he initiated the Spiral Muse CoWorking Group in 2005. The group offered eight desks, meditation classes, group lunches and yoga. San Francisco now has more than 20 active coworking spaces, with names like Citizen Space, Sandbox Suites and the Hatchery.

As coworking takes off in urban centers, is the more suburban and spread-out North Bay ready to get in on the action? Sonoma County is currently home to four official cowork spaces, so signs point to yes, though two earlier attempts, SoCo Depot in Penngrove and Bzhive in Marin, closed within two years of opening.

Anthony Tusler, a 65-year-old Penngrove resident, was one of the founders of SoCo Dept, which closed its doors in 2009. Tusler says that the space fell victim to a bad economy, but he still believes that the coworking model is effective.

“The biggest thing that I found out is how productive I am in that setting,” says Tusler. “For me, it’s not about doing the dishes or doing the gardening at home that distracts me. There’s just something about being at home that makes it hard for me to get into that hardcore work mode.”

The challenges to keeping a space going are economics, getting the word out and getting people in the door, Tusler says, adding that it can be a hurdle for people to leave their home office because then they have to admit that something, somewhere, is lacking. “It’s a major commitment, because it’s a shift in how you see who you are and how you work,” he says.

Once the jump is made into a more communal space, the results seem to turn coworkers into evangelists for the cause. Ralph Scott, a book editor who became a member at WORK in Petaluma when it opened in July 2012, says that his productivity has gone up at least 35 percent.

“If someone is dealing with a work-related problem or creative hold-up, you’ve got a brain trust in here that can probably figure it out,” says Scott.

Barry Stump, 35, lives in Petaluma with his wife and kids. He’s a mobile app developer whose most recent project, Smart Ride, was crowned by Time magazine as one of the 50 best iPhone Apps for 2012.

Stump says that after struggling to be productive in his home office, and suffering the social isolation of not getting out of the house much, the coworking experience has been a refreshing change. “It’s been nice to get up, go somewhere else and get my work done.”

Inspiration from other WORK members is another plus. Stump describes how a woman who was working on a location-based mobile gaming company wandered in one day; she was tired of working out of coffee shops. He ended up getting into a discussion with her about her project, learning new concepts along the way.

“It’s really cool, the stuff that people are working on,” says Stump. “And occasionally, something will come up that I have knowledge about and I can say, ‘Here, let me help you.'”

Kelly Rajala of the Share Exchange, a cowork/small business incubator in downtown Santa Rosa with about 20 active members, says that it’s been a slow go for the North Bay to embrace the idea of working outside the home.

Still, Rajala maintains faith that coworking will pick up speed. By press time, the Share Exchange coworking space will have expanded next door into a 3,000-square-foot location formerly home to the Exchange Bank’s auditing department. It will boast three conference rooms, private offices for rent and more dedicated desk space.

Rajala says that the expansion opens up possibilities for current members, which include graphic designers, an economist, a civil engineer, a sustainability consultant, a fiction writer, a venture capitalist and leaders from the North Bay Organizing Project—a list of talents that could very well change the world. It will also allow for the development of new memberships; she’d like to see the number rise to 50.

While some remain attached to working at home, people can be more productive when they change scenery, says Rajala. “It’s definitely more productive and more focused,” she explains. “They save money since coworking is less expensive than renting an office space. It provides great networking. People form new relationships. They make new business contacts.”

Another possibly unforeseen benefit of coworking is the promise of “accelerated or planned serendipity.” That’s something Michael Newell, the outgoing executive director at North Bay iHub, sees quite often at the Sonoma Mountain Business Cluster coworking space.

“We can’t tell you how or when it’s going to happen, but it will,” says Newell. “We’re starting to see all kinds of interesting people, and they’re starting to work together.” Newell tells the story of two members, a sport-board enthusiast and a wine exporter who’ve embarked on a joint project and are now “joined at the hip.”

“It’s more flexible than the traditional office space,” says Kari Danskin, North Bay iHub’s office manager. Like most cowork businesses, there’s a room with a printer, fax machine and mail system. Donated cubicles and long, wide tables make up the workspace. A few casual chairs and tables are available for informal meetings, and a flat-screen TV displays the latest Wall Street statistics on a ticker.

On the day that I visit the Sebastopol Entrepreneurs Project (SEP), a small cowork space located in the bowels of the United Methodist Church, Santa Rosa resident Jared White is deeply focused on his new business, a self-serve web-publishing platform. White says that he looked at a few different cowork spaces and settled on this one because of the location and price. The ability to work outside the home has made him more productive and has even resulted in collaboration with another coworker, he says.

“There’s a feeling of being part of a tribe, even if you just get to know someone a little bit,” explains White. “It’s like, ‘Hey, I’m trying to run a business and you’re trying to run a business, and we’re all in this big pond together.’ People who are self-employed can feel really isolated and disconnected, and coworking is a solution to that.”

Kathleen Shaffer, a Sebastopol City Council member and one of the founders of SEP, says that the idea initially came from David Hehman of the North Bay Angels, a group of executives and professionals that supports entrepreneurship.

“He said, I don’t understand why you don’t have some kind of incubator, cowork space in Sebastopol, because you have lots of people working out of their homes. And we do—we have lots of entrepreneurs, lots of small businesses and lots of ideas floating around out there,” says Shaffer.

Sebastopol Entrepreneurs Project offers monthly classes and discussion groups on topics like Quickbooks and time management. Classes are held at the O’Reilly Media headquarters. Shaffer says that since the space opened in July 2011, they’ve attracted fewer flexible day-workers and more clientele with serious business ideas and a need for long-term, affordable office space.

A key to coworking success is building a community that goes beyond the idea of work. Like SEP, WORK in Petaluma not only offers classes but also happy hour mixers, where members can get to know each other more casually over Moscow Mules and music on the stereo. The Share Exchange provides free business mentoring on certain days of the week and classes on the legal and financial aspects of owning a small business.

Programs and events are a huge factor in the success of a coworking space, says Genevieve DeGuzman. And really, collaboration and community truly do transform work from drudgery into fun. It’s a new way of looking at how to work, in the midst of a tech revolution that has freed many former “desk jockeys” from the traditional office space.

“It’s great for people seeking to get out of the hermetic enclosures of their homes, who need to be around people to work and want to plant roots in a community of fellow entrepreneurs,” says DeGuzman. “Coworking is really about getting away from the old model of working and looking at work and life more collaboratively. Great ideas come out of the churn of working alongside others.”

Coworking in the North Bay