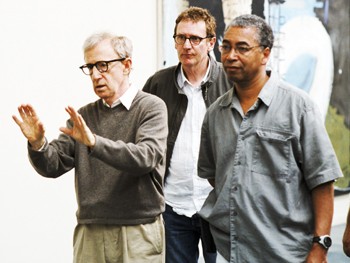 The Vision Thing: Allen on the set of ‘Match Point.’

With his 70th birthday just past and his first hit movie in years set to light the screens, the director is still happiest in the dark

‘Bergman said the worst thing would be to die on a sunny day,” says Woody Allen. It’s Dec. 1, 2005, Allen’s 70th birthday, and he’s hanging over the back of a large-armed chair that he swivels around, face in hand, simultaneously concerned father and pliant child. He says he doesn’t like the sun, and when he woke up that morning, it was a clear, bright day.

The Manhattan sun is out, and Woody Allen is 70 years old. “I’m morbidly resigned,” he says, unsmiling, with quick shakes of his head. “Once you get over 20, all the birthdays stop being fun. You start to get anxiety about being 30, and then 40. It’s just another birthday to get through. More bad news.”

But it isn’t all bad news lately, not by a long shot. Just a few days before, Mr. Allen spoke at Lincoln Center to hundreds of worshipful fans, as the ticketless mobbed outside in a kind of historical re-enactment of the 1970s, when Woody’s every movement caused a New York frenzy. They were pressing against the glass doors to see him, as they used to in the pre–mdash;Stardust Memories days, when he was the adorable auteur, as much the gold standard for New York cuteness as Ed Koch, Barbra Streisand and the Mets.

Now they were back, lined up outside with hopeful eyes, all in celebration of the release of his new, preconfirmed movie, Match Point, cheered at Cannes, juiced in the press (). By Dec. 13, he’d be back in the awards game that he had left behind years ago, earning nominations for four Golden Globe Awards, including Best Picture, Best Director, Best Screenplay and for Scarlett Johansson, his new Keaton-Farrow stand-in, Best Supporting Actress.

For New Yorkers of a certain age–and I’m 28–he is still our director, the Jewish Male of all Jewish males, an important and orienting force for nascent American shiksas everywhere. He has celebrated a kind of perpetual adolescence. He is the New York of wit, banter, bookstores, infidelity, hardwood floors, moldings and area rugs, cocktail piano, live television studios, gray skies, sell-by-date romances, movie lines and movie-line references, fallible best friends and fragrant dinner parties, young and naïve beautiful women, older and smarter quirky men. His milieu is his memory, his persona not him, he says, but a construction: Alvy, Isaac, Gabe, Harry. Fielding Mellish.

The past decade has been another era: Soon-Yi, children, Europe, some empty art houses, Small Time Crooks, Anything Else and a cruel crack in the jaw from his old safe port, the New York Times, the paper whose late, great film critic, Vincent Canby, saw Renoir and Bergman in Woody Allen. Then, a stunningly successful standup at the Oscars after Sept. 11, a couple of more stinkers and, out of the mists of Variety, a cry: “Woody’s back!” It was for Match Point, a somber, violent, stirring film, shot far away from New York in dank, posh London. The hype returned, but calmly, without the strain of wishful desperation.

Still, the question isn’t why audiences left him–even Mickey Mouse, who didn’t have personal problems, and Chaplin, who did, lost theirs–but why they felt so desperate for him to return. To them, he’s ageless, and physically familiar–they want him to look like that: 40, balding, so as to suggest age; libidinous, to suggest youth; always the same, to suggest permanence. A Time cover once blared “Woody Allen Comes of Age”–25 years ago. Woody Allen and age have never seemed to meet comfortably.

Allen says that he has accepted that he won’t be another Bergman. But he wants to make serious films from now on. “Now that I’m older, I don’t know how much time I have to make movies for the rest of my life,” he says, after noting that his next film, Scoop, is a light comedy–and it might be his last comedy. “I should try and not indulge myself in little comic caprices, but try and do something more meat-and-potatoes. I find that it might be a good thing for me to not be in my movies so much, because when I’m in the movie, it forces it to be a comedy. I’m not believable in any other way. I can do much more interesting things if I don’t have to think, ‘Well, I’m going to be on the screen and I have to make people laugh.'”

The interesting things weighing on him these days are the usual preoccupations: “the meaninglessness of life, the unreliability of humanity–nothing good, nothing commercial. Nothing that can’t be turned against me.” He laughs at that and seems unfazed, the confidence of a man who’s been through much worse already, whether he’s pessimistic about what the future holds or not.

Allen’s screening room is tucked into a classic Park Avenue building, in the back, behind the foyer, as if a clever and reclusive animal had burrowed its way back there and no one cared much as it settled in. The entire room–floors, ceilings, furniture–is soft and comforting and hushed. Woody Allen looks good–or the same. His skin is clean, more velvety than wrinkled or hardened.

“I think probably the best I’ve had it in my life is when I met Soon-Yi,” he says. “It’s been the best relationship I’ve had in my life. You know, it lasts, it keeps strong all the time, it remains intense and positive, and I have kids that I’m raising–but you can only think the worst is yet to come!” He laughs. “If I could keep it this way all the time, that would be great.

“The question is, I’m much older than her, and I have to take care of myself to be able to keep in good shape,” he says. “The first thing you need is luck. I have had luck, because there’s longevity in my family. My father lived to over a hundred, and my mother lived to about 95. And then I live cleanly; I go to sleep early and wake up early. I was never much of a drinker. I used to drink wine a lot, but I drink beer mostly. I do like beer.” (He drinks Beck’s, in case you’re interested.) “I exercise just about every day, and I eat well, I don’t eat a lot of junk. To the mild degree that you can help yourself, I help myself.”

Woody Allen grew up in the Midwood section of Brooklyn, the son of lower-middle-class parents, a mother who worked in a flower shop and a father given to menial jobs–driving a cab, waiting tables, bartending, making books.

“There’s a portion of it that was grim,” Allen remembers. “I don’t mean a specific portion–I mean, a portion of everyone’s life is grim, or there were a cluster of grim realities that I had to face as a child. I hated school, and there were many crises that came up that maybe weren’t crises, but I experienced them as such as a child. Life was very lower-middle-class, prosaic, relatively uninteresting, nonglamorous for all of us at the time.

“So when you went to the movies, this was a different world entirely,” he says. “When you lived in a ratty little apartment and it was a hundred degrees out in the summer, and suddenly you go into an air-conditioned movie and buy a lot of candy and popcorn and sit down in this cool atmosphere, and on the screen suddenly Manhattan would materialize in front of you–it was a different life entirely. Then you’d walk back out, and it was a hundred degrees out and your mother made pot roast or something, and it wasn’t that thrilling.”

Woody’s Women: Among the many beauties in Allen’s ouevre, Charlotte Rampling co-starred in his 1980 film, ‘Stardust Memories.’

Allen of course perpetuates the dream in his own films, ones he can temporarily live in himself. “My conception of Manhattan was based strictly on Hollywood movies, and the Manhattan I grew up loving was a Manhattan that appeared only on the silver screen: the grand nightclubs, the penthouses, the people dressing for dinner in tuxedoes in their own home at night, the Champagne corks popping, the people wandering through Central Park romantically at 2 o’clock in the morning. All of this was from Hollywood movies. So the New York and Manhattan that I’ve given the world through my movies has been my Manhattan conceived from films, rather than actual apartments and neighborhoods.

“I grew up in the era of double features,” he says. “So in the space of three hours, you would be transported to some penthouse on Fifth Avenue and, moments later, on a pirate ship from Casablanca to the Alamo. It was just astonishing, the overwhelming magic. And I believe that people who grew up in the era I grew up in–many of them never recovered from movies.

“Many of the men and women never could adjust to the fact that love and relationships were not as you saw them in the movies. Values were not the same, integrity was not the same, and heroism was not.

“I don’t think that I ever recovered fully,” he confesses. “Because I went into movies and have lived a big portion of every year in a very unreal world. I go in the morning and there are beautiful women and handsome men, and they’re in costumes and 1920s nightclubs. I make the stories come out the way I want them to. And so I have always led a very unreal life.”

Allen endorses this way of living; he talks about it with conviction. “The less reality, the better. You get enough reality,” he says. “It finds you–you don’t have to seek it out. If you were locked into reality all the time, you’d go crazy. You’re reduced to escapism. Magic.”

But it’s his birthday, he’ll get through it. He worked this morning. For the rest of the day, he plans on color-correcting Scoop. After, he says he might go out to dinner to some “reasonable” restaurant in his East Side neighborhood; he’s looking forward to traveling to Europe in a few weeks to play the clarinet. Again and again, he brings up his own black moods, insists that he is mildly depressed and consumed with thoughts of his own mortality and the miserable state of the human condition, others’ and his own.

“I’m sorry if I’ve depressed you,” Woody Allen says. “But it is a birthday.”

On the street, it’s sunny. But Mr. Allen looks grudgingly happy. There is no black-and-white card suggesting the end.