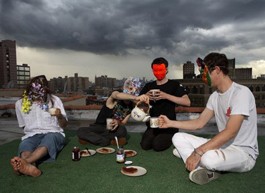 W ell, it finally happened. Animal Collective, the challenging and  experimental quartet revered in both noise-rock and freak-folk circles, has made an accessible pop album. Merriweather Post Pavilion , which hits stores Jan. 6 on vinyl and Jan. 20 on CD, is the first huge release of the year for an indie-rock world waiting with white-baited belt, and the fact that it appeals to a wider audience than ever is already dividing the band’s torrent-friendly followers.

No longer a guarded underground secret, Animal Collective is akin to the Genesis of this generation; Merriweather Post Pavilion could be their Trick of the Tail . It opens with a cinematic electronic waterfall, and though its first two minutes contain hand-clap loops, cricket sounds and strange Bebe Barron oscillations, “In the Flowers” is instantly less Black Dice and more Sufjan Stevens; less Guru Guru and more Van Dyke Parks. The drug-addled narrator trips through a field with an unstoppable spinning force; by the time he wants to “leave my body for the night,” a wall of sound crashes in and heralds the dizzying clamor of an astonishing record.

And yet gone is the untamed abrasion of “For Reverend Green,” the wild, yelping standout from last year’s lauded Strawberry Jam . Much of the hour-long Merriweather Post Pavilion revisits the slow, recessed areas that made up the beautiful second half of the band’s 2004 album, Feels , but barters that album’s eeriness away for rich melodic leanings. Layered vocals sound more breezy than ever over the sing-songy traditional chords of “Summertime Clothes,” and get downright madrigal on the carefree “My Girls,” the aging-romantic “Guys Eyes” and the album’s addictive, canon-like closer, “Brothersport.”

To the band’s more stubborn avant-garde-leaning fans, all of this works fluidly and accessibly for the worse. What they have to admit is that Animal Collective has pulled off the ultimate experiment: that all of their bizarre past explorations have been isolated and arranged as ingredients in conventional songs, creating a fresh pop quilt while retaining the defective pastiche of their noodling past. In the end, Merriweather Post Pavilion is a highly enjoyable, and sometimes funny, listening experience from a band two steps ahead of the rest of us. They create their own worlds; we’re sometimes able to inhabit them, one album at a time.