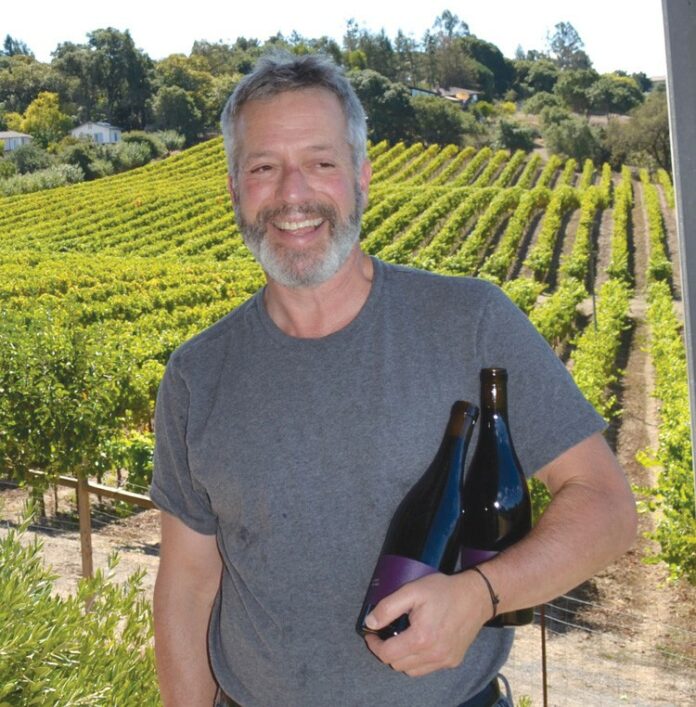 Syrah has a home at Baker Lane Vineyards

A wonky memory can do wonders for one’s sense of discovery.

Driving down a country lane south of Sebastopol on a recent morning, I fully expect to find a flight of Pinot Noir and Chardonnay at the little winery at end of the road. After all, this is the heart of Gravenstein-slash-Pinot country, the apple trees often being the slash. What I find is something a little less typical: six acres of Syrah.

That, and the 250 apple trees that owner Stephen Singer (pictured) left standing on the border with his neighbors when he developed the vineyard in 2002. Now it comes back to me: Baker Lane Syrah was the surprise star of a March, 2010 Swirl, about the short-lived tasting bar at Pizzavino 707. Singer has been involved in the Bay Area restaurant and wine business for over 30 years.

In a small compound on Baker Lane, I find Singer and viticulturist and winemaker Greg Adams wrapping up the details of that morning’s harvest. It’s been an unusually early vintage, here as elsewhere, but they like the quality. While Singer walks ahead in the vineyard, tasting the last grapes that remain on the vines, Adams gets deep about the effect of the southwestern exposure on the metabolic rate of the vines.

The key to getting the flavors of this cool-climate Syrah right, Adams says over lunch a little later, is to pick them the moment before they’re at peak ripeness. “Ah, almost like pulling something off the grill and it’s still cooking,” Singer the restaurateur chimes in.

We’re sitting in Singer’s residence, it turns out—his “quote, ‘dream house,'” as he says—not a hospitality center (the wine is made in a custom crush facility in Santa Rosa). With concrete floors and clean lines, it would fit right into the pages of Dwell magazine. Singer hosts all tastings here, or on the veranda overlooking a bucolic little valley, on a very limited schedule.

For starters, Singer pours a light and crisp 2014 Sonoma Coast Rosé ($18). Cool-toned, deep fruit is the rule here, from the citrus and saline-tinged 2014 Sonoma Coast Estate Viognier ($45) to the 2013 Sonoma Coast Cuvée Pinot Noir ($28), which coats the tongue with flavors of blueberry-cranberry juice, not jam.