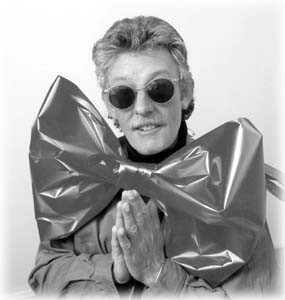 Taking a Bow: William O’Keeffe ties together the west coasts of California and Ireland.

At 10:30 a.m. on a Friday morning, acclaimed Irish abstract painter William Horton O’Keeffe still has his dignity. And if memory serves, keeps it for about 10 more minutes. That’s when fellow artist Poe Dismuke wraps him like a gaudy general in party ribbon salvaged from the dump, tapes epaulets on his shoulders, cummerbunds him in lavender, and presents him to a photographer. Actually, even after he’s donned sunglasses and an oversized Mickey Mouse­ styled bow tie, O’Keeffe’s still got his dignity–and an attitude.

“I’m known as Willie ‘I don’t paint scenes’ O’Keeffe,” he declares with mock haughtiness in his regional accent. “If you want scenes, buy a Nikon.”

By “scenes” O’Keeffe means landscapes, which is odd, considering that he lives in one of the most remarkable landscapes in the world. Odder still, he has been madly painting almost nothing but landscapes, albeit those of the world at ground level, scenes most of us never see.

Spread around him on the floor in the Painter’s Eye Gallery–artist Susan Wolcott’s Petaluma studio and alternative exhibition space–are works on paper, paintings that O’Keeffe has prepared to hang in Wolcott’s space. In a wonderfully synergistic collision of two west coasts, the intricacies of Ireland’s sea-strung Burren coast will wash along the barren walls of a California studio. Entitled “Coastal Labyrinth,” these works hang May 15 through June 1 at the gallery, in an artist’s exchange created last fall when Wolcott and Dismuke traveled O’Keeffe’s green native land and struck up a friendship with the painter. The three are hoping that this cultural swap has only just begun.

“East coasts aren’t the same, west coasts are … frontiers, you know?,” says O’Keeffe, seated on a folding chair in the grubby grandeur of the studio, which features Dismuke’s leering dolls and Wolcott’s elegantly constructed canvases. “You’re right on the edge, right on the cutting edge. Hopefully, we can get this going on a bigger scale, a grander scale, because what I’d really like to do is to get some California artists, [Susan], Poe, whomever, and get them to come over and do a big show. I’d actually like to bring musicians over and writers as well–this is just a preliminary.”

Based on O’Keeffe’s early training as an architect, his love of the chaotic clarity of geology, and the beauty of his home–the limestone wastes in County Clare are known as ‘the Burren’–his suitcase-sized paintings contain their own worlds, a downsizing of linear considerations and color comparable to the microclimate of the 350-square-mile Burren itself. “What this show is about is archaeology, geology, and biology,” he says.

“It’s a fragrant wasteland,” O’Keeffe continues, talking of his home. “And the Burren looks like a wasteland until you actually get very close, and the thing about it is that it’s such a minute landscape. When you actually get down on your hands and knees and get really close, it’s like Yosemite, but it’s only that big,” he says measuring small with his fingers.

“It’s the biggest Zen rock garden in the world, you know? It’s unbelievable, because you’ve got the strata on such a tiny scale. The Burren has Arctic plants and Mediterranean plants growing side by side, orchids and plants from Greenland, so I have a lot of plant paintings. They’re very strange; those are carnivorous succulents over there,” he says, pointing to an evilly squiggled pen-and-ink series. “There are,” he states with authority, “approximately 700 different plant species growing there. If you just drove through it, you’d think that nothing’s there. But if you get into the heartland of it, it’s its own universe.”

Having spent a year exploring the water-carved subterranean limestone caves of the Burren in preparation for an exhibit in 1994, O’Keeffe knows his subject above ground and below. Previous paintings have included peat and other natural materials massed into the surface of the canvases, creating topographies that beg the fingertips like a relief map. The works collected in “Coastal Labyrinth” find deeply hued blank spots cornered onto the page by O’Keeffe’s consistent use of cool-eyed lines.

Walking the exhibit with O’Keeffe is like taking a trip through the surface of the paintings and monotypes into the grass-high world that concerns him.

“That’s where it’s happening, down there at ground level.”