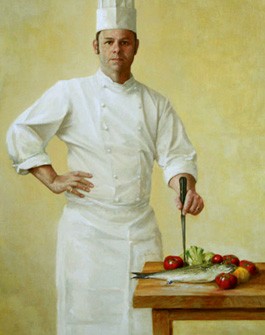 Our favorite institution of learning and cooking and serving and eating, the Santa Rosa Junior College Culinary Cafe and Bakery, opens to the public for its fall semester on Wednesday, Aug. 25. The cafe is known for its baked goods and breakfast treats, but wise elders also know to go there early and often for an insanely cheap lunch and to set Fridays aside for wine pairings, also insanely cheap. The students are learning all levels of restaurant service from tableside to ovenside, and customers benefit from this innovative program. Corner of Seventh and B streets (look for the white toques in the window), Santa Rosa. 707.576.0279. . . .

It’s always exciting when something new starts, and so it is with the inaugural release of La Follette wines, a fresh issue from the Van der Kamp vineyards on Sonoma Mountain. Winemaker Greg La Follette will be on hand at a special estate dinner and vineyard tour replete with music from the Steve Pile Band. Dancing heartily encouraged on Saturday, Aug. 28, from 4pm to 8pm. $125. Call 707.395.3902, ext. 218 for details. . . .

Railroad Square doesn’t taste like bricks and steel; it tastes like garlic and cream and pork and lemon grass and so much more when that section of downtown Santa Rosa celebrates itself and the great work of the Sixth Street Playhouse with Taste of Railroad Square, a walk-around afternoon of food and wine and beer tastings on Saturday, Aug. 21, from noon to 4pm. $40; $45, day of event. 707.523.4185. . . .

Bear Republic Brewing Co. invites the public to be the judge when they hold a cellar party to preview the 20-plus beers they are submitting in September to the Great American Beer Festival, the largest such fest in the country. Bear Republic has won 13 prizes from the competition previously and intends to take home more this year. Help them get hopping on Sunday, Aug. 29, from 3pm. $55; presale only, attendance limited to just 100. 345 Healdsburg Ave., Healdsburg. 707.433.beer. . . .

Two hundred dollars gets one almost just enough to eat at the French Laundry; spend that same amount at chef Thomas Keller’s sister restaurant, Ad Hoc, and one not only gets famously fed but also receives a copy of Keller’s latest cookbook, Ad Hoc at Home. Keller and Ad Hoc chef de cuisine Dave Cruz host book lovers at Ad Hoc in conjunction with Book Passage on Tuesday, Aug. 31, for two seatings that include a full meal avec vin as well as a signed copy of the book and a lively conversation with the two men. 6476 Washington St., Yountville. 5pm and 8pm. 415.927.0960, ext. 1. . . .

Next ArticleJack Attack: “I Hate Spiders”