.Who the Hell Made Rebecca Black’s ‘Friday’ Video? 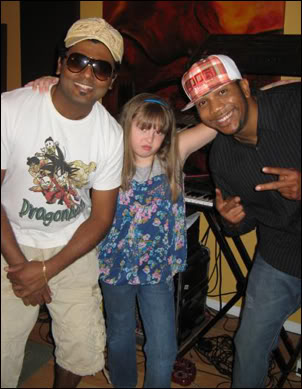 By now, chances are you’re one of the 100,000 people who today have ratcheted up a ton of views on the completely Bonkersville video for Rebecca Black, “Friday.” Where to begin? The way Autotune makes her pronounce the word “Fraah EE Daayee”? The existential question of which car seat to take? The segment in the bridge where it is very explicitly explained exactly where in the rotation of days of the week Friday falls?
See for yourself:

So yes, you are blown away. My friend Trevor puts it best: “It’s like everyone involved was given cat tranquilizers and then forced at gunpoint to make a video. The expression on her face when she’s saying the “fun fun fun fun” line is somewhere between ‘I’m saying “fun” but that word means something different on our world’ and ‘Help me I am being held hostage by Kim Jong Il and forced to do this.'”
Who the hell made this video?

The answer is Ark Music Factory, a Los Angeles-based company operating as an industry hybrid of Maurice Starr and John Bennett Ramsey. Their casting calls are perfect bait for starry-eyed parents: “If you are a great singer without any material and you want to get discovered,” one reads, “then Ark Music Factory is looking for you.” [It’s now been removed; screen grab here.]
The formula is simple: They’ll fly your child between the specified ages of 13-17 to Los Angeles, write her a “hit,” record it in super-compressed Autotuned production, shoot an edge detection-overlay video and BAM! Maybe your kid can notch up a couple thousand YouTube views while you watch your dreams of being a pop-star parent percolate.
Ark Music Factory was launched last month by Patrice Wilson and Clarence Jey—pictured here with one of their pop stars-in-training, J’Rose. Clarence Jey has a MySpace with songs like “Nasty Boi” and “Party Like the Rich Kids.” The biggest name he’s worked with so far is Richie Kotzen, a guitar player from the 1980s hair-glam band Poison. He’s made a “chillax album,” and apparently has studied his Giorgio Moroder. He’s worked with girls as young as nine years old.

Ark Music Factory obviously has put a lot of effort into promoting a girl from Madison named Kaya Rosenthal, whose “Can’t Get You Out of My Mind” video was heavily promoted but has already been surpassed in views by Rebecca Black’s “Friday” video since I started typing this post:

Kaya at least understands the music video game—she took part in this spoof of music videos—but most of Ark’s clients appear oblivious to the realities of the music industry. In the comments of another video filmed by Ark Music Factory’s in-house producers, Sarah Maugaotega’s friends ask questions like “howd you make this !?” and “amazing howd you do it?” Sarah’s probably the most natural-sounding and looking singer on Ark’s roster, and her official YouTube channel has only seven subscribers. Nevertheless, this video got made:

The Ark Music Factory video team of Chris Lowe and Ian Hotchkins has some pretty standard teenage boy-girl ideas revolving around breakups, like this video by Ashley Rose, or this dippy, semi-charming video by Britt Rutter…

…both of which trade pretty heavily in teenage tropes like texting and video chat. Then there’s the truly unexplainable videos, like “Crazy” by Darla Beaux, which shows the teenage singer in a straitjacket on a survelliance camera, interspersed with hipstamatic shots. Most of the others are just as formless in concept.
You’ve got to wonder: What if all these Ark Music Factory girls hung out together, for one night? What would happen? Would the space-time continuum rupture? Behold, the Ark Music Factory launch party, which has to be seen to be believed:

Now look—I’m not going to say that Jey or Wilson are pedophiles, like a lot of internet commenters are doing. That’s a really rash conclusion to reach with no evidence, especially when we all know that the music industry thrives on young girls. They’re just doing what every shuckster in L.A. is doing, with the knowledge that short shorts on skinny legs will never go out of style.
But I will point out that their company obviously needs a lot of money to rent Rolls-Royces; pay studio time; shoot videos and rent venues and musicians and soundmen for launch parties. That money ain’t coming from record sales or publishing royalties. It’s coming pretty obviously from rich parents, buying a chunk of the L.A. myth a few days at a time so their kids can brag about it at school and continue to inflate their own vanity.
Is it sad? That depends on your point of view. Is it hilarious that “Friday,” Ark Music Factory’s biggest hit, has gotten famous for being mercilessly made fun of on the internet? You bet it is.