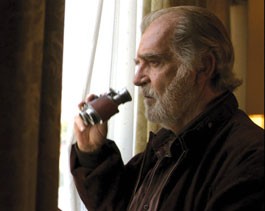 What She Left Behind

Jose sits alone in front of his computer playing solitaire in his carefully decorated apartment. His slicked-back hair matches his trimmed beard, both completely white. His dull expression gives nothing away about his character, and yet the stillness in his apartment declares much about his life without Nora.

Nora’s Will, director and writer Mariana Chenillo’s first full-length feature effort, is a story about loving and learning, and the void left by Nora (Silvia Mariscal), a woman who took her own life just days before Passover. For 20 years she had been married to Jose (Fernando Luján) and raised a child with him. The two eventually divorced, but Jose remained close to her, moving across the street so that he would always be involved in his son’s life and possibly in Nora’s.

Chenillo creates scenes featuring wide emotional ranges thanks to her preference for long takes. There’s something powerful about the unedited and almost documentary-like experience she creates in refusing to cut away too quickly. Her camera lingers to help the audience experience every high and every low. We get to see the slight quiver of a lip just before words are spoken and spy miniscule eye movements just before they completely lower and close the mysteries behind them.

The narrative is succinct; the entire picture takes place in the span of five days after the discovery of Nora’s suicide. Friends are made among various family members arriving for her funeral along with housekeepers and rabbis.

Nora’s Will isn’t about a physical document concerning the distribution of her possessions; rather, the film deals with a woman’s lingering presence in the lives of those she left behind. A Spanish-language film, the original title is Cinco Días sin Nora, translating to Five Days Without Nora. For American distribution, the title emphasizes Nora’s desires and motives in the wake of her death. The original title captures the setting for the film; the revised title captures the themes contained within it.

The script wonders how well two lovers can know each other and what dormant secrets are exposed in death.

This is a film about memory and learning, about experiencing an odd moment from the past in a new light. Nora’s Will serves to remind us that reflection and time away are the best judges of how we feel versus what we believe we are feeling.

The final scene features a table filled with the loving people from Nora’s life. All of them are conversant, joyous and sharing a traditional Jewish meal together. Death shouldn’t be about splintering people from each other, the film seems to counsel, but instead about bringing everyone closer.